You are here: Home 2012 May Cisco: Network Tops Cloud Challenges

Enterprise cloud adoption is expected to grow significantly in 2012, but some serious obstacles to even wider adoption remain, according to a survey of Cisco Systems customers released at the Interop 2012 conference going on this week in Las Vegas. Also at the networking industry’s premier event, Cisco unveiled a new router and related technology that provides to voice networks the same level of security and control that enterprises demand on their data networks.

The 2012 Cisco Global Cloud Networking Survey of 100 IT executives in each of 13 countries reveals that while only 5% of them are using cloud computing technology today to deliver the majority of the software applications they use in their businesses, that adoption rate is expected to quadruple to 20% by the end of this year. 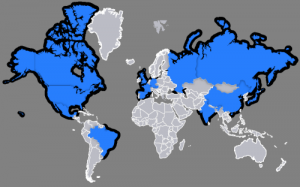 “The reason so many are moving the majority of their apps to the cloud is because there are more cloud applications out there, more choice and then there’s the maturity of the process,” says Inbar Lasser-Raab, senior marketing director of the Cisco Services Routing Technology Group (SRTG).

The cloud adoption process is maturing, she says, because enterprises are becoming more familiar with what cloud computing is, how it works and how it can be implemented within their organization.

While the adoption of cloud computing is on a growth curve, the process is nonetheless complex, time-consuming and includes many pitfalls, the survey shows. The number one challenge to cloud adoption is networking issues, identified by 37% of the IT professionals surveyed.

Cloud computing started in the data center, but as cloud adoption grew, enterprises discovered the limitations of their current wide area network (WAN) infrastructure, Lasser-Raab says. Depending on the application, the infrastructure may need to be upgraded. In the case of a virtual desktop infrastructure (VDI) deployment, for example, a typical WAN link today can support 20 virtual desktop sessions, but may not deliver the sub-50 millisecond latency limit required in a service level agreement (SLA).

“So there are a lot of considerations that they didn’t plan for as they moved the applications to the cloud, but they found out through the process,” she says.

Security of cloud deployments was also a top worry, particularly the protection of corporate data on the network, identified by 72% of respondents. The next biggest concerns were availability and reliability of cloud apps (67%), device-based security (66%), visibility and control of applications across the WAN (60%) and overall application performance (60%).

In a series of tongue-in-cheek questions in the survey about how daunting a cloud project can be, 27% of respondents said they are more knowledgeable about how to play ‘Angry Birds’ or change a tire on a car, than they are about how to migrate their network to the cloud. And 24% said that over the next six months, they think they would be more likely to see a UFO, a unicorn or a ghost before they’d see a cloud project go from start to finish.

Protecting the security of voice networks is just as much a concern to enterprises as security of data networks, as Cisco notes in its introduction of a new security offering at Interop. The Cisco UC Gateway Services application programming interface (API) enables the development of voice network edge services on the Cisco ISR G2 router. The Integrated Services Router is typically seen in branch offices such those of a bank.

Voice networks are vulnerable to fraud in at least two ways, as Jason Rolleston, marketing director in the Cisco SRTG, explains. In some instances, someone can surreptitiously call into a corporate network and then call out, leaving the business to pay the phone bill. In another instance, a hacker can compromise the provider of a 900 number business service, siphoning off the revenue. According to a 2011 survey by the Communications Fraud Control Association, telecom fraud losses are estimated at $40 billion globally.

Using the API, networks can be monitored to detect and thwart suspected malicious activity. Once detected, the API can apply appropriate policy action by the Cisco voice gateway, such as call termination, call redirection or call recording.

Cisco presented a case study of how British Telecom is using Cisco UCS Gateway UPIs, in a partnership with SecureLogix, to deliver voice network policy and security applications to run on the ISR G2 router.

Notably, the services created by the API can run effectively on both time division multiplexing (TDM) and session initiation protocol (SIP) trunking networks, Rolleston says. Many networks are being upgraded to the SIP standard, but TDM networks are still in operation in many places around the globe.

“The world is moving from TDM to SIP over time and so by having a platform that can support both of these, we are actually able to help people migrate more effectively,” he says.

Interop, which runs through Thursday, is produced by UBM TechWeb, which also publishes Network Computing.