You are here: Home 2012 June Eight Commands on a Cisco ASA Security Appliance You Should Know

The nameif command gives the interface a name and assigns a security level.  Typical names are outside, inside, or DMZ.

This command is not used on the ASA 55×0 appliances.

The object network obj_any statement creates an object called “obj_any”.  (You do not have to name the object “obj_any”; that is a descriptive name, but you could just as easily name it “Juan”.)  The network option states that this particular object will be based on IP addresses.  The subnet 0.0.0.0 0.0.0.0 command states that obj_any will affect any IP address not configured on any other object.
ciscoasa(config-if)#object network obj_any
ciscoasa(config-network-object)#subnet 0.0.0.0 0.0.0.0

The route command, in its most basic form, assigns a default route for traffic, typically to an ISP’s router.  It can also be used in conjunction with access-lists to send specific types of traffic to specific hosts on specific subnets.

In this sample configuration, the route command is used to configure a default route to the ISP’s router at 12.3.4.6.  The two zeroes before the ISP’s router address are shorthand for an IP address of 0.0.0.0 and a mask of 0.0.0.0.  The statement outside identifies the interface through which traffic will flow to reach the default route.
ciscoasa(config-if)# route outside 0 0 12.3.4.6

The above commands create a very basic firewall, however, using a sophisticated device such as a Cisco PIX or ASA security appliance to perform such basic firewall functions is overkill.

Here is a sample base configuration: 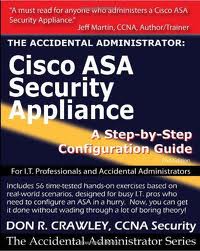 Note: The Accidental Administrator: Cisco ASA Step-by-Step Configuration Guide is packed with 56 easy-to-follow hands-on exercises to help you build a working firewall configuration from scratch.  Based on software version 8.3(1), it’s the most straight-forward approach to learning how to configure the Cisco ASA Security Appliance, filled with practical tips and secrets learned from years of teaching and consulting on the ASA.

All this information is presented in a straightforward style that you can understand and use right away. The idea is for you to be able to sit down with your ASA and build a working configuration in a matter of minutes. Of course, some of the more advanced configs may take a little longer, but even so, you’ll be able to “get it done” in a minimal amount of time!

How to Configure Cisco PIX Firewall?