The Spanning Tree Protocol (STP) is a network protocol that ensures a loop-free topology for any bridged Ethernet local area network. The basic function of STP is to prevent bridge loops and the broadcast radiation that results from them. Spanning tree also allows a network design to include spare (redundant) links to provide automatic backup paths if an active link fails, without the danger of bridge loops, or the need for manual enabling/disabling of these backup links.

Spanning Tree Protocol (STP) is standardized as IEEE 802.1D. As the name suggests, it creates a spanning tree within a mesh network of connected layer-2 bridges (typically Ethernet switches), and disables those links that are not part of the spanning tree, leaving a single active path between any two network nodes.

STP is based on an algorithm invented by Radia Perlman while working for Digital Equipment Corporation.

One of the most confusing things to understand when learning about the switched part of network is the Spanning Tree Protocol (STP – 802.1D) and how it works to allow traffic to be efficiently forwarded through the switched network. This article will take a look at the STP path selection process, how a root switch is elected, how root and designated ports are assigned, and how each switch port is determined to be a root or a designated port as well as which ports will be forwarding or blocking.

Once the root bridge has been selected (or elected), the formation of the forwarding tables can begin. One concept that must first be reviewed, however, is the idea of STP interface costs. Depending on the speed of the connected interfaces on the switches, they will be assigned a specific STP cost, these costs are then used to determine the total cost from the current switch to the root switch. Each of the switches throughout the network will send STP traffic between each other to determine this total path cost. Table 1 shows the common default STP interface costs that are used.

Now we’ll see how this is used to determine the optimal path. An example of this will be based on the topology shown below in Figure 1. 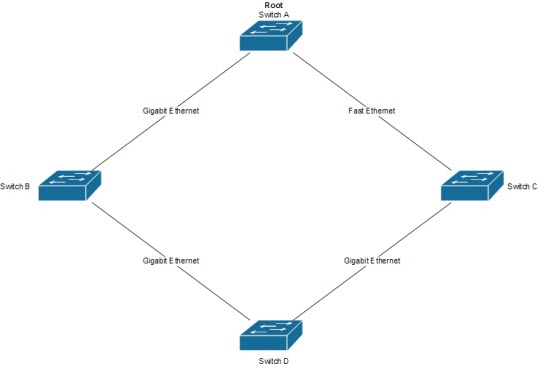 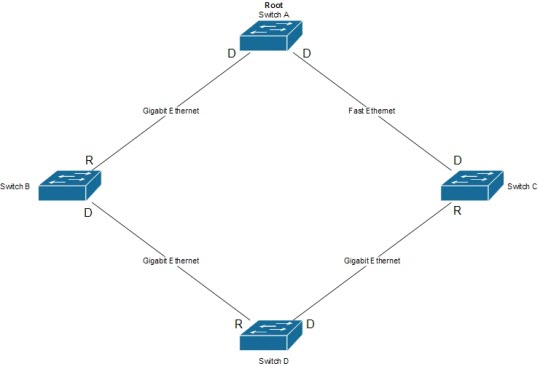 Since the main purpose of STP is to avoid switching loops, some work needs to be done for the link between Switch A and Switch C. With STP there can only be a single forwarding designated interface per segment. When more than one designated interface exists on a segment then one of the switches needs to put their interface into a blocking state; in this state STP traffic is still received but no user traffic is forwarded. The selection of which switch will begin blocking is determined by the switch with the least cost path to the root. In this case Switch A has the least cost path to the root (0) so Switch C will begin blocking its interface to this segment (some texts don’t call this a designated port but a non-designated port). This is shown below in Figure 3. 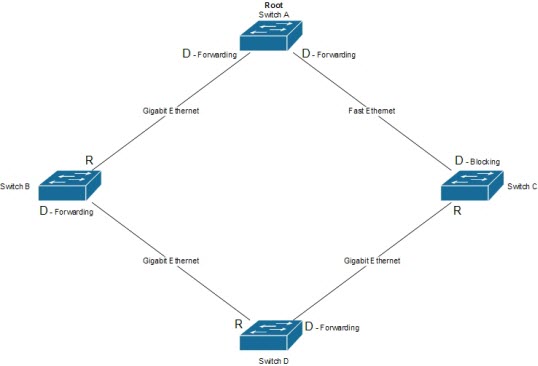 Since the article is written from the perspective of 802.1D and not the newer STP standards, it would be good to complete some further reading on how the newer 802.1w standards forward differently; however, this process is completed very similarly and all of the material discussed here should give a good base for this further research.

How to Set Up IPSec Direct Encapsulation on Cisco Devices?