You are here: Home 2013 March Cisco Combines Wired, Wireless and SDN into Its New Catalyst Switch

Cisco RECENTLY unveiled a new Catalyst switch and WLAN controller designed to converge wired and wireless networks and centralize management of both environments. 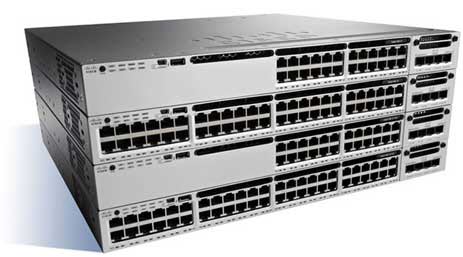 The new switch is the Catalyst 3850 and the WLAN controller is the Cisco 5760. Both are based on a new Cisco programmable ASIC called the Unified Access Data Plane (UADP) that is designed to converge processing and termination of wired and wireless traffic into a single data plane, enable consistent services to be applied to both, and allow for deployment of software-defined networking services.

Typically, wireless networks have been built as overlays to the wired network, resulting in two logical networks to manage and in disparate features and services. BYOD is exacerbating the situation, Cisco says, necessitating convergence of the two infrastructures.

With that, Cisco unwrapped the Catalyst 3850 Unified Access Switch with the UADP ASIC. The 3850 represents the next generations of Cisco’s Catalyst 3000 series switches and a successor to the Catalyst 3750-X, says Rob Soderbery, senior vice president and general manager of Cisco’s Enterprise Networking Group.

In addition to the UADP ASIC, the Catalyst 3850 has a built-in 40G WLAN controller able to support 50 access points and 2,000 clients. It runs IOS-XE, and the UADP ASIC lets it deliver common and consistent network intelligence, with networkwide visibility and analytics and granular hierarchical quality of service across the wired-wireless infrastructure, Cisco says.

The Cisco 3850 has the same port densities as the Cisco 3750-X: 24 or 48 10/100/1000Mbps Ethernet ports, and four Gigabit or two 10G Ethernet modular uplinks. But what differentiates the Cisco 3850 from the 3750-X is Power over Ethernet+ capabilities on every port. The Catalyst 3850 series can also be grouped in a four-switch stack to achieve 480Gbps of performance.

The 5760 WLAN controller appliance features 60Gbps performance, and support for up to 1,000 access points and 12,000 clients. It offers granular QoS, and Cisco’s Application Visibility and Control management software and TrustSec security application are planned enhancements.

The UADP ASIC will be rolled into Cisco’s entire Catalyst campus switching portfolio, including the Catalyst 6500 and 4500 lines, over time, Soderbery said.

“This is designed to provide consistent policy of wired and wireless networks,” analyst Zeus Kerravala of ZK Research said of the UADP announcement. “You set the policy once and have it uniform for wired and wireless deployments. It’s a good starting point for programmability.”

ISE lets administrators create one policy for multiple access methods and device types. IT can set automated access control enforcement with a policy that regulates security, device control and user authentication, whether end users connect to the company network via wired, wireless or VPN, Cisco says.

All products are currently available, with the exception of Cisco Prime 2.0 and Cisco ISE 1.2. Those applications are expected to be available in March.

Soderbery says the wired/wireless convergence offered by the 3850, 5760 and new management applications is complementary to the cloud-based WLAN administration technology Cisco obtained via its recent acquisition of Meraki. Meraki customers are smaller enterprises and businesses that are looking to hand off features and control to a cloud provider whereas larger enterprises would take on that responsibility themselves in the new switch and controller.