You are here: Home 2015 October Why We Need Multigigabit Networks Today?

In this article, we will share the main analysis and recommendations of WiFi Evolution from ZK Research. What did they say about the Wireless LAN Evolution? You can read the original reviews here…

First of all, let’s look at the Evolution happened on the Wireless LAN in the decade. 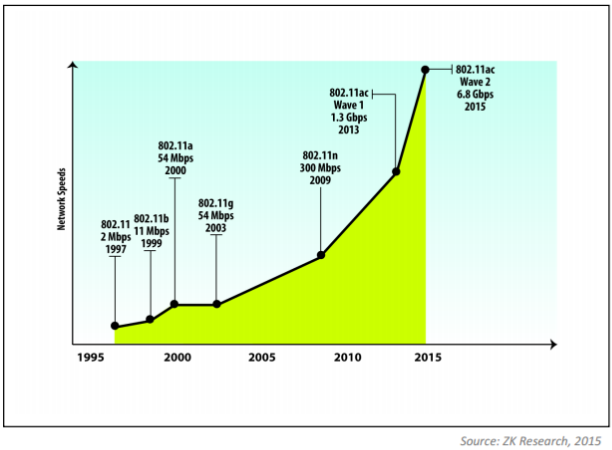 From the exhibition above we can read that the biggest innovation in the history of wireless LAN is the release of 802.11ac Wave 2.

Wave 2 of 802.11ac also introduces a new feature called multi-user multiple-input, multiple-output (MUMIMO), which utilizes “beamforming.” With MUMIMO, a Wave 2 802.11ac access point (AP) can send and receive data from up to four radio clients simultaneously. Juxtapose this with a three-stream 802.11n AP or an 802.11ac Wave 1 AP, where each AP can talk to only one client at a time, one after the other. MU-MIMO makes the wireless network much more efficient.

The evolution of WiFi to 802.11ac Wave 2 is a significant step forward for wireless networks. Historically, the wireless network acted very much like a network hub where all of the clients accessing the network shared the available bandwidth. If one of the devices happened to access a bandwidth-consuming application, such as videoconferencing, it would degrade the performance of the network for all users.

The combination of increased speed and MU-MIMO enables 802.11ac Wave 2 APs to deliver performance similar to that of a network switch, where bandwidth can be dedicated to individual users. Now, workers can use any application on any device and be assured of consistent application performance. 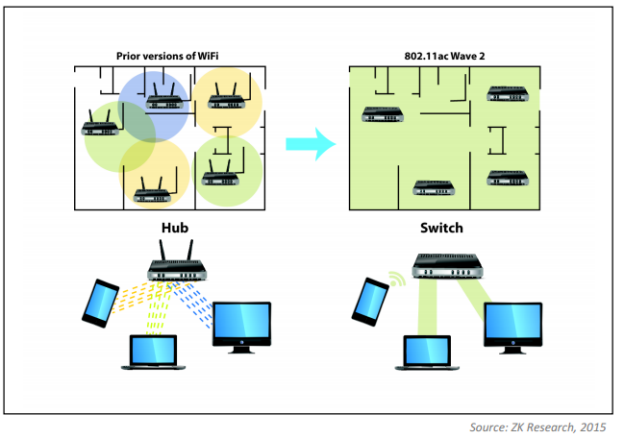 As the leader in both wired and wireless networking technology, Cisco has also introduced a unique solution to the challenges of migrating to 802.11ac Wave 2.

Details of Cisco’s Multigigabit solution are as follows:

Although the Wave 2 APs will connect using PoE+, the UPOE option gives customers the ability to connect a variety of other devices in the future. This may include end points such as digital signs, security cameras or even computers.

Cisco’s Universal PoE Can Power a Wide Variety of Devices 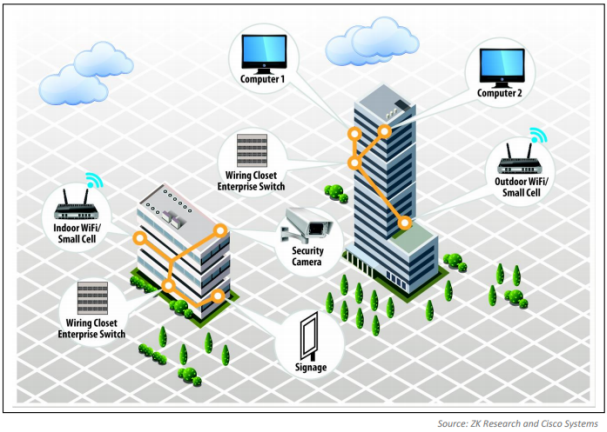 In addition to the upgrades to existing products, Cisco has introduced a new compact Ethernet switch: the 3560-CX eight-port switch with two Multigigabit-capable ports. This switch is ideal for smaller businesses or organizations looking to quickly add 802.11ac Wave 2 APs to the network. It is also suitable for enterprises looking to deploy quiet switches closer to end users in collaborative workspaces, retail checkout stations, hotel rooms and more.

To help businesses make the transition to a predominantly wireless access edge, Cisco co-founded the NBase-T Alliance in late 2014. The alliance has multiple goals including promoting solutions for more speed over Cat 5E/6 cabling, building momentum for Multigigabit technology and making the solution an industry standard by coordinating with standards bodies, such as the IEEE. Cisco initially founded the alliance with Aquantia, Freescale Semiconductor and Xilinx. However, since then, several other companies have joined the alliance including Cavium, Tehuti Networks, Vitesse, GLGNET, Intel, Brocade and Aruba Networks. 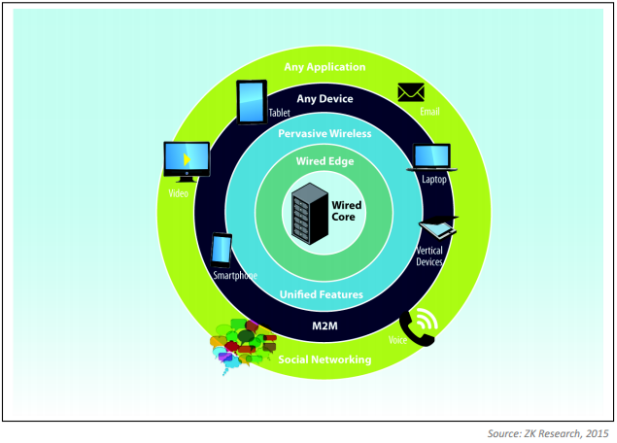 The next WiFi standard, 802.11ac Wave 2, will bring speeds of 6.8 Gbps to wireless, which is substantially faster than the existing 1 Gbps wired standard most commonly found at the access edge today.

The release of 802.11ac Wave 2 means that workers no longer must make performance trade-offs when connecting over wireless. Now, users can have the flexibility and agility of using wireless with the best connectivity speeds. 802.11ac Wave 2 is the nocompromise wireless technology, and shifting to this technology should be at the top of every business and IT leader’s priority list.

So…to help businesses get started, what ZK Research (A Division of Kerravala Consulting) recommends are the following points: