Cisco StackPower Technology is so cool that it can aggregates all of the available power in a stack of switches and manages it as one common power pool for the entire stack, sharing the power where needed. You can configure up to four switches in a stack with the special connector at the back of the switch using the Cisco StackPower cable, which is different from the Cisco StackWise 480. (This technology is not supported on the Cisco Catalyst3650; it is supported only on the Catalyst 3850.) 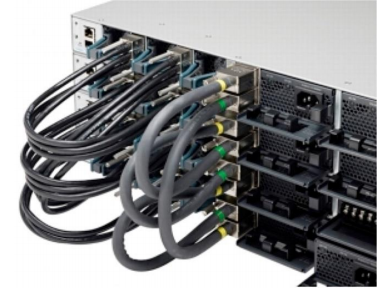 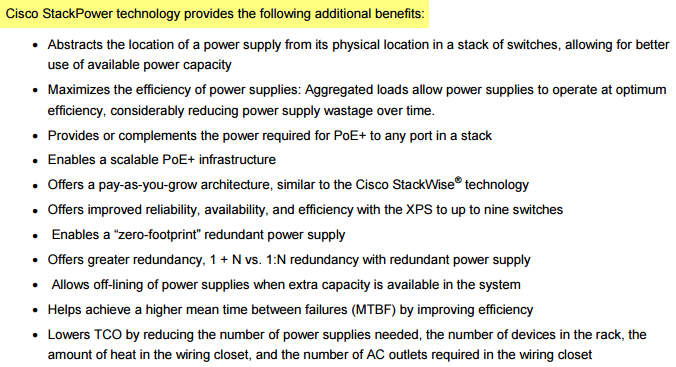 The key aspect to Cisco StackPower technology is the way power is supplied and distributed to a switch in the stack. A switch requires that power be provided at different voltage levels, such as 5 VDC and 48 VDC, and a traditional power supply provides those voltages. These requirements make the power supply more complex, and this complexity affects efficiency.

Cisco StackPower technology implies a new approach to power-supply design and power distribution in a switch, but its effects are most significant in a stack of switches.

The Cisco Catalyst 3850 Series Switches are designed for power supplies that provide a single power voltage. This approach simplifies the power-supply design and allows aggregation of power, from power supplies in a single switch and across switches in a power stack. Cisco StackPower technology creates a pool of power that shares a common load consisting of all the switches in the power stack. This capability to manage power as a shared resource is unique to a stack of switches that can operate as a single unit. Therefore, this technology is available only on the Catalyst 3850 Switches.

Note that all power available in the power stack is combined into one single large pool of power, and the stack becomes a large single load to the power pool.

The boot-up sequence of events is as follows:

Power budget required is higher for Cisco StackPower operation. This higher budget allows each switch to budget enough power for the switch itself, to power a high-power network module (if present), and to power its downstream neighbor’s Cisco StackPower logic (multipoint control unit [MCU]), which is the minimum number of components in a switch to form a power stack without booting Cisco IOS XE Software.

For example, a standalone Cisco Catalyst 3850-48P Switch (Figure 3) budgets 280W; this budget does not necessarily reflect the actual power consumption (refer to the data sheet for details).

Adding a New Switch to a Power Stack

In the simplest example, a power stack is formed by using a special cable to connect switches to each other to form a closed ring, similar to the topology for a Cisco StackWise stack (Figure 4). Up to four switches can be part of a power stack in a ring topology, and up to nine switches can share power in a star topology by using an XPS (Figure 5). Current flows through the cables that form the power stack and feeds switches that need power or complements power requirements of other switches in the stack. It is a safe system with plenty of circuit breakers spread around the printed circuit board to cut off current to different components in the system or if needed, to the system itself.

The Cisco StackPower cables are thick but flexible, and they carry power as well as a data signal to provide a communications channel among the switches in the power stack.

Cisco StackPower and XPS cables are keyed and have colored bands on the ends to help you understand what cable plugs into what switch or XPS.

● The cable end with the green band can connect only to a Catalyst 3850 Switch.

● The cable end with the yellow band can connect to a Catalyst 3850 Switch or an XPS.

Figure6. Cisco StackPower Cable for Use with Catalyst 3850 Switches

Before connecting the switches in a power stack, follow these guidelines:

Figure7 shows a ring configuration using both of the supplied 0.3-meter Cisco StackPower cables and one 1.5-meter cable. In the examples that follow, the switches are stacked in a vertical rack or on a table. 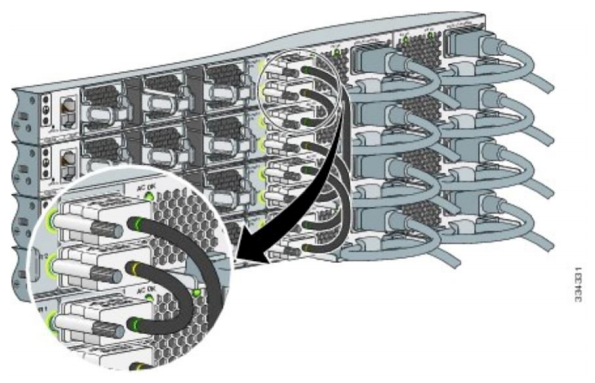 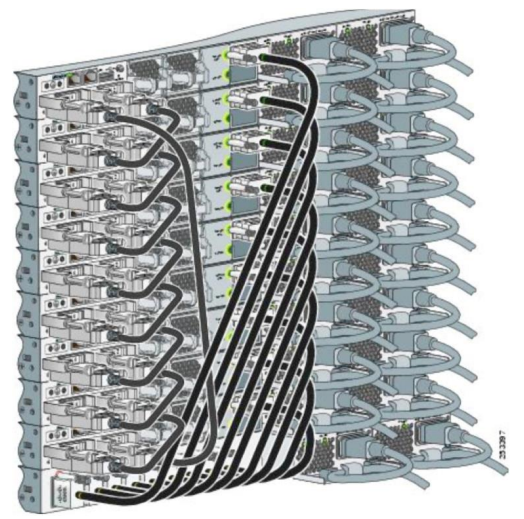 In Figure9, the Cisco StackPower cable 2 is faulty. Therefore, this stack does not provide redundancy.

Figure9. Example of a Cisco StackPower Stack with a Failover Condition

In Figure10, Cisco StackPower port B on the center switch has failed and this stack partitions into two stacks. The top two switches share power, and the bottom switch is now a separate stack.

Figure10. Example of a Partitioned Cisco StackPower Stack with a Failover Condition

The stackable* Cisco Catalyst 3850 Series Switches come with four power-supply options; you can use any of them on any switch in a stack and in any combination. Table3 lists these options.

The Cisco Catalyst 3850 Switches provide two slots for redundant power supplies, but only one supply is needed to run a single switch unless full PoE+ is deployed on a 48-port switch. In that case, the power requirement is about 1700W, which is more than the 1100W provided by the largest available power supply. If the switch is deployed within a Cisco StackPower stack, a second power supply might not be needed if the stack has extra power to meet the requirements of this switch, though the power-supply slot must be covered to maintain proper airflow.

The following are some important concepts for Cisco StackPower technology:

● The Cisco StackPower feature is responsible for the negotiation and distribution of power from a common power pool among the switches participating in the power stack.

● The intelligent load shed is a mechanism that Cisco StackPower technology uses to decide what devices must power down when the available power drops below the allocated power levels. A priority scheme is used to set different levels that become useful when:

◦ Initial allocation of power to boot up into Cisco IOS XE Software: You can change priorities for powered devices and switches to values other than the preconfigured default values.

● Physical placement of power supplies in a switch is independent of the power required for that switch.

● A switch may not be allowed to boot up with Cisco IOS XE Software if all available power in the common pool has already been allocated. But this switch continues to participate in the power stack while waiting for more power to become available to allow it to boot.

● The power stack reports all of the Cisco StackPower information to the stack master; therefore, configuring a power stack that spans multiple data stacks is not recommended (refer to the “Best Practices” section).

…More use case for the Cisco StackPower feature you can read the full Cisco StackPower Technology-Efficient Use of Power White Paper: https://www.cisco.com/c/en/us/products/collateral/switches/catalyst-3850-series-switches/white-paper-c11-737746.html