The high-density large campus design has multiple distribution layers connected to a core layer and dense de­mands in the access layer for wired ports and WLAN devices. The preferred design has capacity for supporting 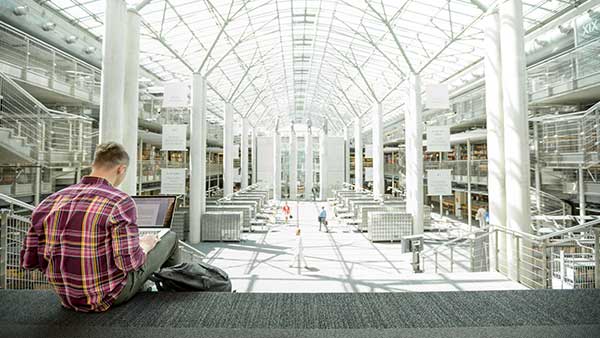 over 15,000 wired and wireless users and devices, is highly available for critical business continuity, and has the capabilities to support advanced features such as NetFlow and network virtualization and segmentation. You may select this design for cases where densities may not be as high as supported; however, the requirements dictate needs for critical business continuity or advanced capabilities.

If there are three or more interconnected distributions or requirements for connectivity at a common location, you use a Layer 3 LAN core in order to simplify the connectivity and management. You use one of the two core op­tions in order to meet the core needs in the high-density large campus design. The flagship platforms for these options:

Cisco Nexus 7700 Series—Family members in the Cisco Nexus Series have a variety of density options and can be segmented into virtual device contexts, allowing the same devices to be used for a campus core and a data center core. When there are requirements for core switches to be independently managed with the ability to have virtual PortChannels between the switches, or a need for high-density 10/40/100 Gigabit Ethernet, these switches are the preferred option.

Catalyst 6800 Series with Supervisor 6T—Family members in the Catalyst Series accommodate a variety of core densities, covering the features commonly used in a campus core. Optionally, you can merge the devices into a VSS mode, with options for redundant supervisors in each member switch offering a highly available configuration, managed as a single device.

In the high-density large campus, you make choices for the wired distribution and access based on the most highly available platforms for the role, the highest density and widest selection of interface options, redundant power and modular control plane, with the most advanced software feature capabilities.