What is Wi-Fi 6? You can watch the video at first and get to know it in 2 minutes.

As the number of Wi-Fi 6-capable Stations (STAs) continues to increase, wireless networks built using enterprise-class Wi-Fi 6 Access Points (APs) are becoming more popular than ever before. When upgrading legacy Wi-Fi networks or deploying new Wi-Fi networks, Wi-Fi 6 is the obvious choice for enterprises. However, IT management personnel are often concerned about how to select the Wi-Fi 6 APs most suited to their service requirements, from among the numerous types available. They are also concerned about how best to quickly deploy high-quality wireless networks.

There are two critical factors affecting the throughput, access capacity, concurrent capacity, and per capita bandwidth of an AP, namely: radio spectrum resources (bandwidth) and the number of spatial streams of the AP (MU-MIMO capability).

Radio spectrums on wireless networks are similar to valuable land resources, and are usually insufficient in continuous networking deployment scenarios. So, adding spatial streams can help increase WLAN throughput. A single radio of an enterprise-class Wi-Fi 6 AP supports up to eight spatial streams, delivering a throughput of up to 9.6 Gbit/s.

Figure 1. Throughput corresponding to the different number of spatial streams @ HE80 MHz on the 5 GHz radio 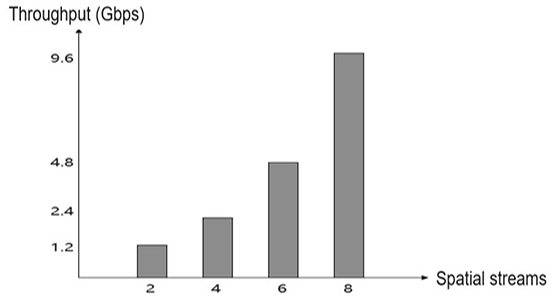 2.4 x 4 MU-MIMO: A Must-Have for Building an Enterprise Wi-Fi 6 Network

More spatial streams means higher throughput and higher hardware costs. As such, enterprises need to choose APs based on their actual service requirements for the most cost-effective deployment.

In the past, services such as web browsing, email, cloud desktop, and 1080p video streaming dominated network traffic in wireless networks, with a per-user bandwidth of only 4 to 10 Mbit/s on average. However, with the emergence and popularization of new technologies and services — such as streaming media advertisements, Virtual Reality (VR) and Augmented Reality (AR), 4K High Definition (HD) video, and intelligent office systems — the per-user bandwidth requirement has increased sharply, from 8 Mbit/s to 50 Mbit/s, or even 100 Mbit/s. According to Tolly’s test data, if services are initiated on 20 STAs concurrently, the total throughput of an enterprise-class 2 x 2 MU-MIMO Wi-Fi 6 AP at HE40 MHz is only 210 Mbit/s, with an average per-user bandwidth of only 10 Mbit/s, clearly failing to provide sufficient bandwidth. To achieve a two-fold increase in the per-user bandwidth, with the same number of concurrent STAs and maintaining experience levels, enterprise-class Wi-Fi 6 APs working in 4 x 4 MU-MIMO mode or higher become must-haves.

Figure 2. Two-fold increase in the number of concurrent STAs on each AP 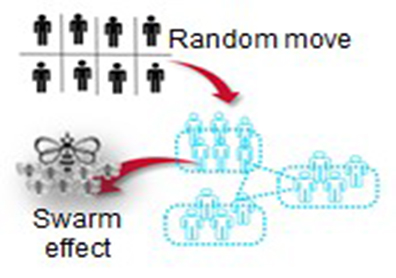 Wireless networks will gradually outnumber wired networks. Of course, STAs can access wireless networks anytime and anywhere, and the number of STAs connected to each AP is going to increase significantly. Before network construction, the advice to the majority of enterprises must be to plan a minimum of 30 to 40 concurrent STAs connected to each AP, if enterprise office and production requirements are to be met. As previously stated, if services are initiated on just 20 STAs concurrently, the provided bandwidth of an enterprise-class 2 x 2 MU-MIMO Wi-Fi 6 AP only meets service requirements of 1080p video streaming. Therefore, Wi-Fi 6 APs working in 4 x 4 MU-MIMO mode or higher are essential. 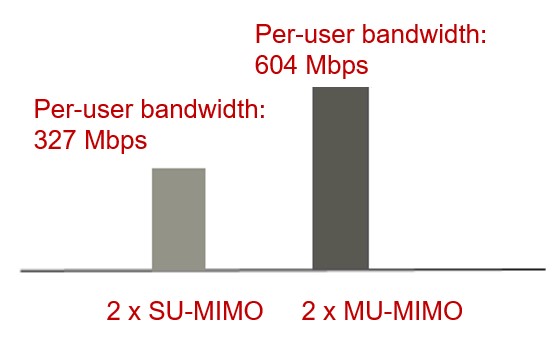 When two STAs with two spatial streams concurrently access a single 5 GHz radio of an enterprise-class 2 x 2 MU-MIMO Wi-Fi 6 AP at HE80 MHz, the average throughput of each STA is just 327 Mbit/s, due to air interface resource contention. When an enterprise-class 4 x 4 MU-MIMO Wi-Fi 6 AP is deployed in the same scenario, it can schedule the two STAs at the same time. As such, the average throughput of each STA can reach up to 604 Mbit/s. Simply put, in scenarios dominated by STAs with two spatial streams, enterprise-class Wi-Fi 6 APs working in 4 x 4 MU-MIMO mode or higher are required to fully unleash the potential of MU-MIMO.

With all-wireless access already a cornerstone for enterprise digital transformation, the importance of Wi-Fi is self-explanatory. Whether the benefits of a software scheduling algorithm can be fully realized is heavily dependent on hardware capability. Clearly, enterprises must consider both their service requirements and future service evolution, as well as upgrade costs, during network construction. And the case for choosing enterprise-class Wi-Fi 6 APs in 4 x 4 MU-MIMO, when building a service-oriented, experience-centric Wi-Fi network, is an extremely strong one.