You are here: Home 2021 October How does Video Surveillance System Work?

These days, video surveillance systems seem to be everywhere. It allows individuals, enterprises, institutions, and businesses to monitor, record, and account for what occurs on their premises even when they are not around.

Installing a video surveillance system and pressing record on a VCR to record what the cameras observed used to be the norm. You may go back and watch the video recording to see what happened after the fact if anything went wrong. In the case that a criminal is apprehended, the video recording could be utilized to assist identify them and prosecute them.

There is a better way today, and it’s called Video Surveillance System Monitoring. It goes far beyond your normal surveillance system by having your cameras monitored in real-time, 24 hours a day, by expert personnel. This enables you to react to a situation as it occurs and make a significant impact on the result. 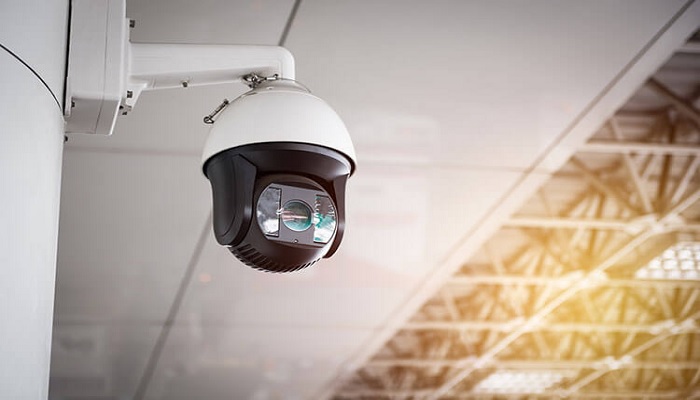 A video surveillance system is a network of one or more video cameras that sends the captured video and audio data to a specific location. The images are not available to the public like television. They are live monitored or transmitted to a central location for recording and storage.

Cameras to capture images and some sort of recording device or monitoring service are the most basic components of a video camera surveillance system; one- and two-way audio speakers are also becoming more popular every day, adding yet another tool to the arsenal of a surveillance system monitoring company’s trained technicians. Aside from the usual miscellaneous supplies used when installing any kind of A/V equipment, you’ll only need cameras, possibly speakers, and a recording device or monitoring capabilities.

Closed-circuit television, abbreviated as CCTV camera is a self-contained surveillance system that transfers the video recordings of the connected cameras to a DVR (Digital Video Recorder) through coaxial cabling.

Because the system makes use of traditional radio frequency (RF), it is considered to be the most efficient and cost-effective means of video surveillance.

Analog: Analog cameras are older models with lower resolution and require coaxial cable connections to the DVR for each camera and separate wired connections for power. Furthermore, the cameras must be placed near the DVR to ensure higher-quality footage. Because their field of vision is often smaller than that of IP/digital cameras, more cameras may be required to cover the same area as one IP camera. Finally, the recorded footage will further distort if an attempt is made to enlarge an image.

However, these cameras are cheaper, and they do have a wide variety of design options to ensure that you can find what you need at a reasonable price. Additionally, they won’t take up any of your network’s bandwidth, unlike IP/Digital cameras.

IP/Digital: Digital cameras with far higher resolution and clarity than analog cameras are known as Internet Protocol cameras. They use power over ethernet (PoE) switch to connect to an NVR and only have one cable to connect to both the NVR and the power supply.

IP cameras don’t need to be close to the NVR to create high-quality images, and their images may be digitally expanded without losing quality. Finally, IP cameras offer a wider field of view as well as a variety of extra functions such as motion-activated auto-recording, object recognition, and smart-technology options.

IP cameras don’t need to be close to the NVR to create high-quality images, and their images may be digitally expanded without losing quality. Finally, IP cameras offer a wider field of view as well as a variety of extra functions such as motion-activated auto-recording, object recognition, and smart-technology options. 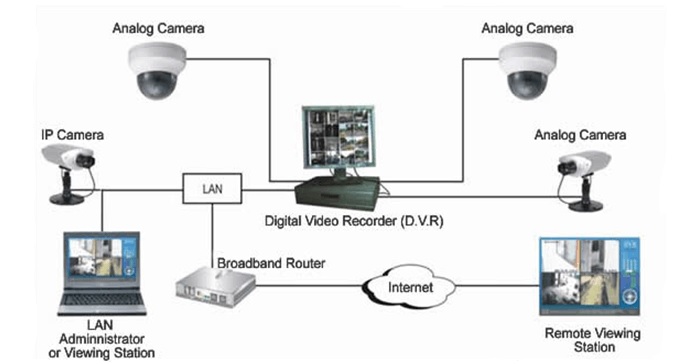 Digital IP cameras have the disadvantages of being significantly more expensive, consuming more bandwidth from your network to transmit images, and requiring more storage. Furthermore, while being Wi-Fi cameras provides the convenience of being able to access their feed from anywhere, it also makes them hackable, therefore special attention to their security features is required.

The footage produced by a video surveillance system can be monitored in a variety of ways.

Having a security guard or team responsible for viewing the live footage on the monitors/display devices connected to the recorder is perhaps the most traditional and familiar option. The displays for analog systems that use coaxial cables to connect the cameras to their DVRs and display units are typically monochrome, but they can also be HD with color.

However, with a vast majority of today’s security cameras being digital internet protocol cameras, the feed is now available via one’s network. While it can still be monitored on an official display unit, computers and mobile devices can also access it. Furthermore, certain systems and cameras can wait until movement is detected before sending mobile notifications to authorized workers who can then view the live feed.

The CCTV system collects the video feeds of all the connected cameras and transmits them to the receiving equipment like a monitor. Generally, a coaxial cable is used to make this connection. An entire network of surveillance cameras makes up the closed-circuit system that is used for monitoring and controlling a specific property. These cameras often work on IP (internet protocol) networks which connect the security (surveillance) cameras from the remote location to the main location.

CCTV camera is used for managing the security of the public as well as industrial facilities. These systems can be combined with intrusion-detection devices for providing better protection. While the security or surveillance camera is better used for simply monitoring a particular area and thus controls any unwanted situation.

If you want to order video surveillance products, welcome to visit:  Shop Video Surveillance at Router-switch.com .