You are here: Home 2011 October What Will Mr. Jobs Say to Socrates?

Steve Jobs passed away, and people all over the world are so sad, especially Apple fans. Well, maybe genius who has some special talent is also loved by God. Some people who lived nearby Cupertino saw rainbow in the sky when Mr. Jobs left and took a picture of it, which is a particular way to commemorate Jobs. 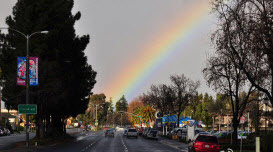 What Jobs brought to us is so much, “Stay hungry, stay foolish”, “Follow your heart”, which inspired so many young people and people who have dreams. Indeed, Apple products changed the world, and Jobs’ thoughts influenced people in the information era.

All we know about Jobs is his Apple and his educational and work backgrounds. And many people like to describe him as a great creator in the PC field. But I would rather believe that Mr. Jobs is a great thinker as Socrates, because his spirits and thoughts inspired thousands of people and even change someone’s life. So maybe somebody is interested in what Steve Jobs will say to Socrates while he is in the heaven.

There are some famous sayings by Jobs and Socrates, and then you’ll find they are so similar to each other.

“Remembering that you are going to die is the best way I know to avoid the trap of thinking you have something to lose. You are already naked. There is no reason not to follow your heart.”

“So when a good idea comes, you know, part of my job is to move it around, just see what different people think, get people talking about it, argue with people about it, get ideas moving among that group of 100 people, get different people together to explore different aspects of it quietly, and, you know – just explore things.”

“We don’t get a chance to do that many things, and everyone should be really excellent. Because this is our life.”

“You can’t just ask the customers what they want and then try to give that to them. By the time you get it built, they’ll want something new.”

“I want to put a ding in the universe.”

“Bill Gates‘d be a broader guy if he had dropped acid once or gone off to an ashram when he was younger.”

“My job is not to be easy on people. My jobs are to take these great people we have and to push them and make them even better.”

“Innovation distinguishes between a leader and a follower.”

“So when a good idea comes, you know, part of my job is to move it around, just see what different people think, get people talking about it, argue with people about it, get ideas moving among that group of 100 people, get different people together to explore different aspects of it quietly, and, you know – just explore things.”

“True wisdom comes to each of us when we realize how little we understand about life, ourselves, and the world around us.”

“I cannot teach anybody anything, I can only make them think.”

“The really important thing is not to live, but to live well. And to live well meant, along with more enjoyable things in life, to live according to your principles.”

“Wonder is the beginning of wisdom.”

“The way to gain a good reputation is to endeavor to be what you desire to appear.”

“An unexamined life is not worth living.”

“To find yourself, think for yourself.”

“The only good is knowledge and the only evil is ignorance.”

I would trade all of my technology for an afternoon with Socrates.        – Steve Jobs

Most people’s concern is the future fortune of Apple after Jobs’ death—how long will Apple go in the future; Is Apple still a leader in PC; Will Apple surprise its fans by its fantastic user experience and products?…

No matter what the Apple looks like in the future, Steve Jobs’ experiences told us that to be a thinker and follow your heart are like fresh air and water in our life. Also some famous enterprises(such as Cisco, HP, Myspace, Google) who suffer some troubles will learn something from Jobs’ experiences.