You are here: Home 2011 November Cisco Catalyst Switch: How to Create and Delete VLAN on It?

VLANs are a mechanism to allow network administrators to create logical broadcast domains that can span across a single switch or multiple switches, regardless of physical proximity. This function is useful to reduce the size of broadcast domains or to allow groups or users to be logically grouped without the need to be physically located in the same place.

One of the typical configuration activities you’ll perform on a Cisco Switch is to manipulate VLANs. 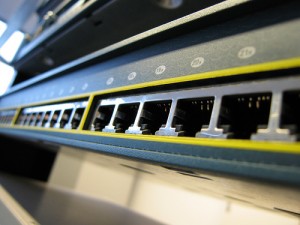 In one physical Cisco Catalyst switch, you can create multiple VLANs that connects to different network.

While these commands were tested on a cisco catalyst switch 3750 series, similar commands (may be with slight variation to the port number format) should work on all cisco switches.

In the following example, we are creating 192 VLAN network (for 10.10.192.0 network). While creating a VLAN you also need to specify the range of ports from the switch that needs to be part of this VLAN network.

In this example, ports 3 through 6 are configured as part of 192 VLAN network.

In the above commands:

Apart from providing the access to the vlan 192 for the port numbers 3 through 6, you can also specify the following additional switchport configuration parameters (for example, nonegotiate and mode access)

Once you’ve created a VLAN verify it as shown below,

On a side note, it is always recommended that you upgrade ISO image on your cisco switch to the latest version.

Let us assume that you want to delete the VLAN 192 (ports 3 through 6) that you just created.

Deleting a VLAN is as simple as assigning the default VLAN 1 to the ports that are part of the VLAN you want to delete, and delete the VLAN.

First, assign the default VLAN 1 to ports 3 though 6 as shown below.

Next, delete the vlan itself as shown below.

Finally, verify that the VLAN 192 got deleted as shown below.

As a final note, if you don’t know what you are doing, do not execute any of the above commands on production switch, as you might bring down your network. Do this only on a test system, where you can play around and learn how to manipulate VLANs on cisco switch.