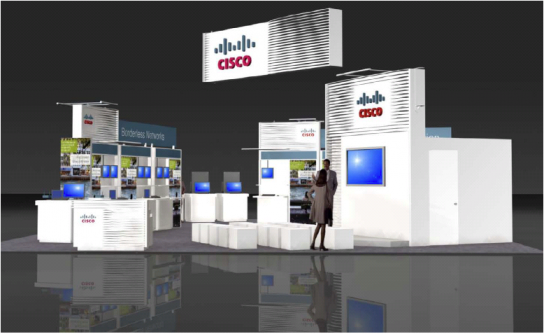 2011 was a tumultuously transitional year for Cisco. The company came to the realization that its strategy for growth by entering new markets spread it too thin, distracted it from core markets and impacted profits. It cost thousands of employees their jobs and forced Cisco to scale back on its aggressive growth plans and tactics. At the same time, Cisco became more aggressive in its sales and marketing, looking to protect and gain share against the likes of HP and Juniper while honing its structure to be more responsive to customers.

These and several other events listed below helped define Cisco in 2011 and reshape it for the future:

• Upping the Internet TV ante with competitors Google, Microsoft and Apple, Cisco unveiled its Videoscape products and strategy at the Consumer Electronics Show. Videoscape is a cloud-based platform targeted at service providers looking to offer video services as a new revenue stream. It is designed to combine digital TV, online content, social media and other communications applications into an all-inclusive home and mobile video session.

• Cisco reports a disappointing second quarter in which revenue and profits in Ethernet switching drop amid a challenging product transition and distraction from adjacent markets, like consumer.

• In an effort to streamline operations, Cisco names Gary Moore as its first chief operating officer, a post CEO John Chambers says he’s been lobbying to fill for 10 years despite the coincidental timing with profitability issues.

• Cisco hosts its Partner Summit in New Orleans where CEO Chambers admits that the switching product transition issues caught the company by surprise.

• Also, word leaks out that Cisco is developing an additional fabric switch line to Nexus, under the code-name “Jawbreaker.” Jawbreaker will use merchant silicon instead of custom ASICs, sources say, adding that it’s a response to Juniper’s QFabric launch.

• Later in the month, Cisco rolls out the Nexus 3000, a low latency top-of-rack switch based on merchant silicon for the high-frequency trading market.

• Cisco also pays its first ever cash dividend to shareholders.

• CEO Chambers issues a memo to staff stating that Cisco’s lost focus, momentum and credibility after a couple of disappointing quarters. He acknowledges in the memo that Cisco is flawed, has failed to execute and been slow to make decisions over the past couple of quarters, and prepares employees for some major changes to come.

• Cisco also implements a voluntary early retirement program, its first in two years, in an effort to cut positions and reduce expenses.

• Cisco streamlines operations, revamping its sales, services and engineering organizations, and trimming its council-based management structure and lines of businesses. This is done in an effort to simplify operations and speed decision-making.

• Cisco also reports an 18% drop in net income in Q3, and Chambers reiterates that the company still has its work cut out for it.

• In an effort to block inroads from Arista and IBM, Cisco announces its “high-performance trading fabric” anchored by the Nexus 3000 line and the Nexus 5500. Cisco claims these switches outperform Arista and IBM switches, obtained from its acquisition of BLADE Network Technologies, in latency and jitter.

• Cisco eliminates 6,500 positions in its continuing efforts to streamline operations and regain lost profitability, the largest layoff in the tech industry in 2011. Cisco also sells a cable set-top box manufacturing facility in Mexico, eliminating another 5,000 Cisco jobs. Combined with the 550 positions cut with the consumer business restructuring in April, Cisco has shed more than 12,000 employees.

• Cisco adds life to its aging Catalyst 6500 switch by unveiling a 2Tbps supervisor engine for the most successful switch in Cisco’s history. The upgrade kicks off a war of words with rival HP.

• Cisco reports Q4 results that beat its and Wall Street’s expectations, even though the switching business continues to struggle.

• Cisco also exits the premises-based building energy management market it entered with the 2009 acquisition of Richards-Zeta.

• Cisco releases results of a study that indicate that people 30 and under, either working or in school, consider Internet access to be as vital to their lives as air, food and water. The findings stoke the debate on whether offices are necessary in an age where employees can work from anywhere as long as they have Internet access.

• Cisco launches a major upgrade to its Nexus 7000 switch with Fabric 2, which takes it to 15Tbps.

• While collaborating with its rival, Cisco also criticizes HP. It issues a memo slamming HP’s consideration of exiting the PC, tablet and smartphone businesses, and the detrimental effect it will have on the company’s networking business. The memo is intended to arm Cisco’s sales force with some competitive ammunition and is another display of Cisco’s reinvigorated aggressiveness as it looks to recover lost momentum in previous quarters.

• Cisco releases two more studies that show: 1) that global cloud computing traffic will grow twelvefold from now to 2015, representing a 66% compound annual rate and comprising 33% of data center traffic; 2) that young professionals and college students might value Internet-connected mobility and social networking in the workplace over monetary compensation.

• Ramping up the competitive aggression against its rivals, Cisco blogs a challenge to HP to cease litigation against employees who leave the company to work elsewhere.

• Cisco releases another study, the third surveying college students and young professionals, that finds the under-30 set to disrespect and openly circumvent IT policies in order to access the Internet over any device at their disposal.