The Cisco Catalyst 6000/6500 family represents the flagship of the Cisco Catalyst switching product range. The switch is aimed at the enterprise network and also at service provider networks. The Catalyst 6000/6500 is chassis-based, which means that it consists of the same fundamental components as a Catalyst 4000/4500 switch (i.e., chassis, supervisor engine, and switching modules), which are now discussed in more detail. 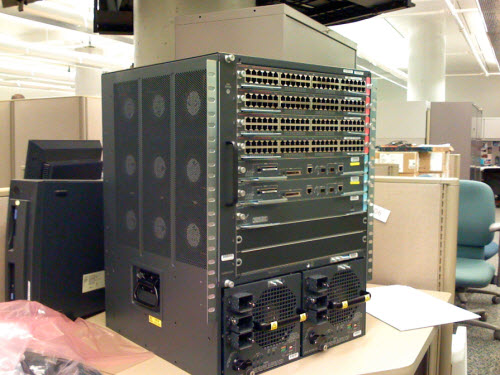 The Cisco Catalyst 6000/6500 switch family consists of three Supervisor engines, which each vary in terms of functionality and performance:

All supervisors can be installed in redundant pairs, ensuring maximum availability in the event of an active supervisor failure. Any additional add-on modules that extend system performance or functionality (e.g., SFM, PFC daughter card, and MSFC daughter card) can also be installed in a redundant configuration, ensuring the highest levels of availability

Without a MSFC, the Catalyst 6000/6500 Supervisor engines operate the CatOS operating system. When you add a MSFC, by default, the Supervisor still runs CatOS and the MSFC runs Cisco IOS (this configuration is known as referred to as hybrid IOS). You can then configure the switch to operate in native IOS mode, where the Supervisor and MSFC are managed by the same Cisco IOS management interface, as long as the switch has an MSFC installed.

Even though there are three types of modules, all modules can communicate with each other, even if they are attached to different switching backplanes (e.g., classic and fabric-only cards are not connected to the same bus). In this situation, an interconnection between the crossbar switching matrix is interconnected with the shared bus backplane allows classic cards and fabric-only cards to communicate. Table 1-8 lists some of the LAN switching modules available for the Catalyst 6000/6500.

As you can see from the preceding, the Catalyst 6000/6500 is not just a LAN switch; it is a platform that can integrate LAN switching features with advanced security, application, and network management features.

Today there are two main operating systems that are used on Cisco Catalyst switches:

You are most likely familiar with Cisco IOS; Cisco IOS is the popular operating system installed on nearly all Cisco routers and is a very mature, feature-rich, and extensible operating system that offers Cisco customers significant value-add and return on investment. Historically, Cisco acquired a few major switch vendors in the early- to mid-1990s, which resulted in the introduction of what is now known as CatOS. CatOS is used to operate the following platforms:

CatOS has a very easy to use command-line interface and has traditionally supported bulk administration tasks much more effectively than Cisco IOS. These are important features when configuring a device that potentially has more than 500 ports.

The ability to perform bulk administration tasks has been addressed in later releases of Cisco IOS.

Unlike Cisco IOS, which has many configuration modes and different commands, CatOS provides three basic types of commands:

Other commands are used for system management, such as copy and write; however, for configuration tasks, you will only ever use the set and clear commands and then use show commands to verify your configuration.

Many chassis-based CatOS switches support optional Layer 3 routing modules (e.g., Catalyst 5000/5500 RSM, Catalyst 6000/6500 MSFC), which include their own Cisco IOS. This means that the module essentially just uses the switch chassis for power and network connectivity, with management of the module performed separately from the Supervisor that runs the switch. When CatOS is used to manage the Layer 2 switching component, and Cisco IOS is used to manage the Layer 3 routing component, the switch is said to be managed using hybrid IOS, because two different operating systems (CatOS and Cisco IOS) are used to manage the switch.

Cisco plans to eventually phase out CatOS, moving all switching platforms to Cisco IOS, which will allow for a uniform management interface across all Cisco switches and routers, as well as better integration of Cisco switching and routing features.

Today, the following platforms are based upon Cisco IOS:

As you can see from the preceding list, the Catalyst 4000/4500 and Catalyst 6000/6500 switches can either run CatOS or Cisco IOS, which leads to the question: Which operating system should I run? On the Catalyst 4000/4500, the operating system is tied to the type of Supervisor engine, and normally the much higher performance capabilities and integrated Layer 3 switching capabilities of the Cisco IOS-based Supervisor 3/4 engines make them the obvious choice. It should be noted, however, that many features are still present in CatOS that are not present in Cisco IOS and that many new features are first released into CatOS code before Cisco IOS. This applies also to the Catalyst 6000/6500, where you can use either CatOS or Cisco IOS regardless of the Supervisor engine installed.

Although Cisco IOS might be the way of the future, for now and many years to come, there still exists a large deployment of CatOS-based switches. This means you must ideally be proficient in both Cisco IOS and CatOS if you want to design, implement, and support Cisco switched networks.