“What differences btw catalyst 4500 and 6500 series? Our company is looking to get a new switch for or core/OC. The switch being replaced is an Enterasys matrix, I don’t know which model, but is very old, and all servers have been upgraded, we’re looking to get all of them on Gigabit Ethernet.”

“The network guy is looking to get a 4500, but I’m interested in get real view of both the 6500 and 4500, and how them compares to each other. I can see the 4500 are more compact, and both of them are current line switches. Interest points would be:
-how much time is left for each one before they become EoL
-what options can support one that the other can’t
-what is performance like on both of these beasts” 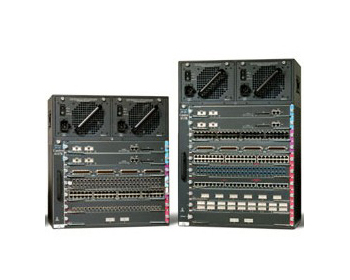 The questions above were put forward by Cisco users. All right, what the main difference btw catalyst 6500 and Cisco 4500 Series. Besides reading specific datasheet of Cisco 6500 and catalyst 4500 switches from Cisco’s website, here we collected some experiences from Cisco 6500 and 4500 users, which may give you some hints and advices to select a right one for your company or enterprise.

Let’s have a look:

1. Review on Cisco catalyst 6500 & Cisco 4500 Series: Everything depends on how much load/throughput you’re pushing through the core now. The 4500 can act as a downsized core switch, and with SupV you can even get 10Gb links.

The 6500 can support a lot more functions with special feature blades, like firewall, content load balancing, FlexWAN, etc. Both support PoE. The blades between 4500 and 6500 are NOT compatible or inter-changeable.

You should check out Cisco’s site for that, but 6500 is the core datacenter switch, whereas the 4500 is positioned for more wiring closet or server aggregation.

In real world, I use 4507Rs and 4510Rs as my wiring closet/server aggregation switches, as well as 3750Gs for server aggregation, and I use 6500s for core and distribution (I also recommend not looking at 6513, unless it’s 6513-E, which I don’t think is out yet). The environment is gig to the desktop (with PoE) and gig to the server (sometimes bonded 2gig to database servers).

In addition QoS support on the 6500 and 6500 line cards is far superior to the 4500. The newer blades on the 6500 are fabric-enabled, and have a 40-Gbit connection to the backplane, which connects the blade to a Supervisor module. Internally within those blades that have DFCs (Distributed Forwarding Card), the throughput on the card itself (say going from one port on the card to another) is 64-Gbit. 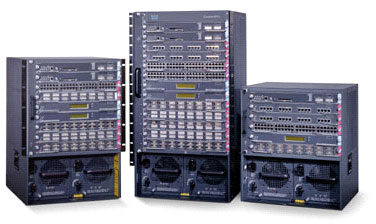 I believe the supervisor engine in the 6500 is also more powerful, and you have a wider range of card options for the 6500.

3. Cisco 6500 and 4500 Switches User’s Experience: “There are indeed many many differences. And many of the difference will come in the supervisors. I use both 6500 and 4500 switches.  Both do layer 3, voice vlans, QOS.   However, if you need functions such as nbar or netflow, the 6500 is the way to go.  4500’s either have limited or no support of these functions, because of their supervisors.  A supe IV for a 4500 can support netflow if you buy the netflow daughter card.  Same is true with a Supe V.  A Supe V 10 Gig supports netflow without an extra purchase.  The newer supe 6’s don’t support it at all.”

4. Cisco Upgraded Catalyst 4500 and 6500 Switches in 2007. The new improvements on Cisco 4500 and Catalyst 6500 Series are designed to better support peer-to-peer and real-time applications. They are the Cisco Catalyst 6500 Series Virtual Switching System 1440, which combines multiple Catalyst 6500 switches into one and scales system bandwidth capacity to 1.44 terabits per second; and the Cisco Catalyst 4500 E-Series with CenterFlex technology, which the company says it provides high network performance for rich applications.

The Cisco Catalyst 6500 Series Virtual Switching System 1440 is enabled by the Virtual Switching Supervisor Engine 720 with 10 Gigabit Ethernet, hardware module that can make two 6500 switches behave and appear to administrators as one.

The Cisco Catalyst 4500 E-Series with CenterFlex technology now delivers 320 gigabits per second and a fourfold increase in per-slot bandwidth using its unique centralized and flexible architecture. It provides 250 mpps (million packets per second) centralized performance and is based on Cisco’s new CenterFlex technology which resulted in the filing of 19 new technology patents enhancing security, quality of service (QoS) and performance, the company claims.

How to Configure a DHCP Relay on Cisco Catalyst 4500 Switches?