You are here: Home 2012 June 3 WAN Protocols: HDLC, PPP, and Frame-Relay You Should Know

Your company is connected to the Internet, isn’t it? So what WAN protocol do you use to connect to the Internet? Chances are, that if you have a T1 leased line to the Internet or a private network between locations, you use one of these 3 WAN Protocols: HDLC, PPP, or Frame-relay. Let’s explore the differences and similarities of these protocols.

HDLC stands for High-Level Data Link Control protocol. Like the two other WAN protocols mentioned, HDLC is a Layer 2 protocol (see OSI Model for more information on Layers). HDLC is a simple protocol used to connect point to point serial devices. For example, you have point to point leased line connecting two locations, in two different cities. HDLC would be the protocol with the least amount of configuration required to connect these two locations. HDLC would be running over the WAN, between the two locations. Each router would be de-encapsulating HDLC and turning dropping it off on the LAN.

HDLC performs error correction, just like Ethernet. Cisco’s version of HDLC is actually proprietary because they added a protocol type field. Thus, Cisco HDLC can only work with other Cisco devices. 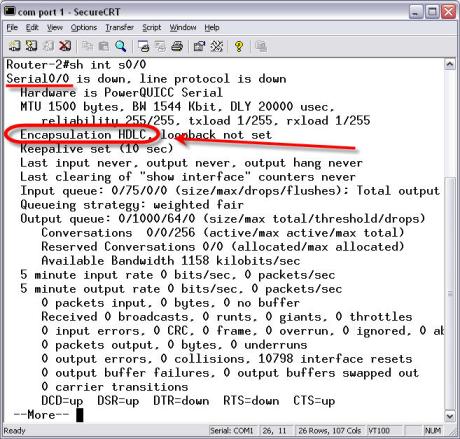 You may have heard of the Point to Point Protocol (PPP) because it is used for most every dial up connection to the Internet. PPP is documented in RFC 1661. PPP is based on HDLC and is very similar. Both work well to connect point to point leased lines.

The differences between PPP and HDLC are:

NOTE: How to Configure PPP on Cisco Router？

To change from HDLC to PPP, on a Cisco router, use the encapsulation ppp command, like this: 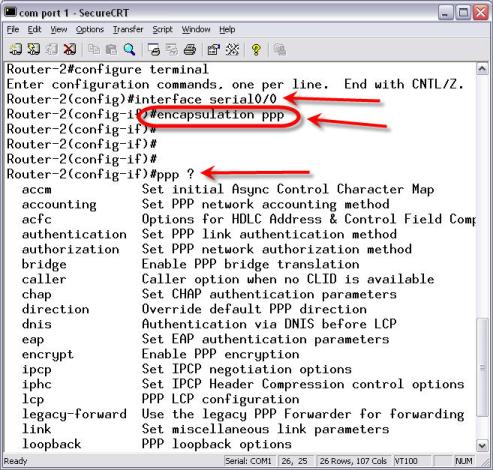 After changing the encapsulation to ppp, I typed ppp? To list the PPP options available. There are many PPP options when compared to HDLC. The list of PPP options in the screenshot is only a partial list of what is available.

Frame Relay is a Layer 2 protocol and commonly known as a service from carriers. For example, people will say “I ordered a frame-relay circuit”. Frame relay creates a private network through a carrier’s network. This is done with permanent virtual circuits (PVC). A PVC is a connection from one site, to another site, through the carrier’s network. This is really just a configuration entry that a carrier makes on their frame relay switches.

Obtaining a frame-relay circuit is done by ordering a T1 or fractional T1 from the carrier. On top of that, you order a frame-relay port, matching the size of the circuit you ordered. Finally, you order a PVC that connects your frame relay port to another of your ports inside the network.

The benefits to frame-relay are:

Some other terms you should know, concerning frame relay are:

How to Setup VLAN Trunking Protocol (VTP) on Cisco Switches?