You are here: Home 2012 August How to Configure OSPF in a Single Area?

OSPF routing protocol is classified among the best dynamic protocols that exist in networks today. It is also considered to be a sophisticated routing protocol that aims to maintain loop-free and accurate routing tables.

Here we’ll go over the necessary commands that are needed to enable the OSPF routing protocol, define OSPF networks, configure advanced options, and more. We’ll also look at how and why OSPF is used.

Let’s get started by taking a look at some

Based on OSPF LSAs, each router constructs a topology table which contains every connection link within the network. Then, the Dijkstra algorithm runs over the topology table to find the shortest path to every other router, and hence creates the routing table.

This algorithm, which is also known as the SPF algorithm, runs on every OSPF enabled router on the network, and routers within a particular area all have the same topology tree of the specific area.

The following command is needed in order to enable OSPF routing protocol on the router:

The process-number is nothing more than a number local to the router. It’s only used to distinguish processes within a router and can be given an arbitrary value. This value does not have to be the same on every router within the area. However, it is always good practice to keep this number the same for better administration.

Enabling OSPF is not enough to activate it. The OSPF process needs to know the networks that are going to be advertised (i.e. the interfaces on which OSPF will run) and the area they reside in. Therefore the following command is needed to make OSPF operational:

The address can be the network address, subnet, or the address of a specific interface.

Therefore the wildcard-mask parameter needs to be defined for accurately identifying the necessary interfaces.

The wildcard-mask consists of 4 groups of 8-bits each. Each 0 bit indicates a “must” and each 1 bit indicates an “any”. This will become clearer in the next section on Defining OSPF Networks Examples.

The area-number specifies the area to be associated with the specific address and consequently the interfaces to be grouped within that area.

By default, area 0 is used; if more than one area is to be created in a network, area 0 is the first one that needs to be defined.

The schematic diagram below illustrates how a single command is able to cover all router interfaces and also how individual interfaces can be specified. 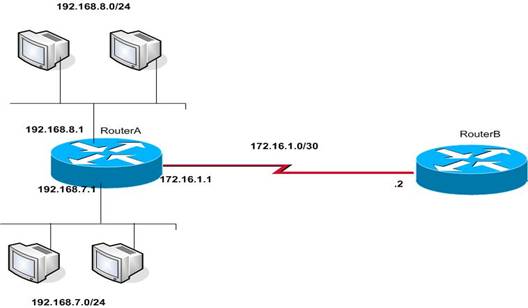 The following command will force only interfaces addressed from 192.168.0.0 to participate in OSPF:

The following command specifically forces the serial interface to participate in OSPF area 0:

A few advanced options can be useful in administrating OSPF, though they are not necessary for OSPFs normal operation. These options include:

The source of Link-state Advertisements in a given area is identified by the RID. This ID has the form of an IP address and can be automatically or manually defined.

This is the preferred method of defining the RID. Any unique IP address can be defined as RID and it never changes even if the interface that the router is using for the RID goes down.

Even when a manual configuration change of the RID is performed, this does not take effect until the next router reload or OSPF routing restart.

The following commands show how to manually configure the RID. The clear ip ospf process command is used to activate the RID on a router that is already running OSPF:

Configuring the Cost of an Interface

As already mentioned, the OSPF process assigns cost values to interfaces based on the inverse of the bandwidth parameter assigned to the interface with the bandwidth command.

For calculating the SPF to a given destination, the router takes into consideration the costs of the links along various paths. The path with the lower cost is selected as the shortest path.

To force the router to pick up a certain path, manual setting of the cost on a link along the path can be achieved using the following command:

Setting Priority for the Selection of the Designated Router

In multi-access networks the router with the highest priority value is chosen as the DR which acts as the central point of LSAs exchange.

The priority command is assigned on an interface. Default priority for an OSPF interface is 1. The range is from 0 to 255. 0 means that the interface does not involve in the DR election.

The following command configures a priority value on an interface.

As I mentioned at the beginning, OSPF routing protocol is classified among the best dynamic protocols existing in networks today. It has all the necessary features of an interior gateway routing protocol:

OSPF uses multicasting so that each router informs all other routers in the area of its neighbors and costs. This information allows each router to build a complete topological tree consisting of routers and omnidirectional links connecting them together. Each of these links carries a cost value.

SPF algorithm runs over this topology tree and computes the shortest path from every router to every other router in the area. The results from SPF algorithm construct the router’s routing table.

OSPF, How to Configure OSPF in the Cisco IOS?