Cisco launched the Nexus 9000 series of top-of-rack and chassis switches with its Application Centric Infrastructure (ACI) product suite. The Nexus 9000 switches run NX-OS–the operating system that powers all of Cisco’s Nexus data center switches–but they also run in a slimmed-down ACI mode that allows the switches to participate in the SDN framework. Existing Nexus switches, including the beefy core Nexus 7000 series, will not participate in ACI. Instead, the Nexus 7000 and its big brother–the 84 Tbps Nexus 7700–will function as interconnect devices, linking together multiple ACI deployments.

An Example: A Cisco Nexus 7 switch aggregating the Dedicated Cloud traffic in RBX2 (from OVH.CO.UK) 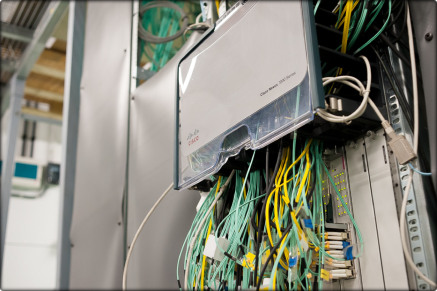 The Nexus 7000 “seems to have become an expensive cog,” said Anthony Burke, a network architect and blogger. “I would have hoped a Nexus 7000 investment would have been protected a little more. My recent 7000 purchase leaves a bad taste in my mouth, knowing I am a little crippled in the ACI grand plan.”

Burke is heavily invested in the Nexus 7000 and 5000 series, which means it will be a long time before he can make a business case for ACI and the Nexus 9000.  In fact, his current Cisco fabric will deliver value and functionality comparable to ACI if he deploys a software overlay from VMware or Juniper.

“I could right now go get (VMware) NSX or (Juniper) Open Contrail and solve my issues and leverage my Clos fabric of Nexus 7000 and 5000,” he said. “I see the ACI fabric as a lock-in. NSX can ride across any vendor.  [ACI] is impressive if you are building green field networks. There are some features [in ACI] that are nice–a closer integration of hardware and overlay–but that cannot justify lock-in or forklift upgrades.”

Although ACI’s Nexus 9000 series bears the same name as Cisco’s existing line of Nexus data center switches, networking consultant John Herbert senses that Cisco is asking customers to start over again in the data center. First Cisco asked customers to migrate from the Catalyst 6500 to the Nexus 7000. Now, Cisco is pushing customers again toward the Nexus 9000, with Nexus 7000s as interconnects that don’t participate in ACI.

“Cisco says the Nexus 7000 is still an essential part of my data center, but it sounds like what I’m going to end up with are islands of SDN connected by legacy Nexus 7000s, which doesn’t sound to me like an ideal situation; nor does it give me true end-to-end control,” Herbert said. “What the Nexus 9000 brings to the table is higher density 40 Gigabit ports perhaps, and ACI mode. But how does that truly integrate with my existing investment in the Nexus 7000 platform?”

Herbert will take a wait-and-see approach for now. He’s seen Cisco do an about-face on product roadmaps before. He said Cisco led the market to believe the Catalyst 6500‘s days were numbered when the Nexus 7000 came along. Then Cisco introduced a new supervisor engine that extended the 6500’s life for years, although Cisco now recommends it as a campus core and aggregation platform. And this year Cisco extended the core Catalyst platform even further with a new chassis, the Catalyst 6800. Herbert thinks Cisco could change course again and do more to integrate existing Nexus switches into ACI.

“How do I know that if I invest in the 9000 now, a year down the line Cisco won’t add ACI-capable line cards and NX-OS to the 7000 platform instead?” he asked. Cisco declined to be interviewed for this story, saying its spokespeople are stretched too thin while introducing ACI to its customers. But it did issue the following statement from Shashi Kiran, senior director of marketing, about the future of legacy Nexus platforms in relation to ACI and the Nexus 9000:

“We will continue to invest in the existing portfolio, including Nexus 7700. The Nexus 9000 can be deployed in a standalone mode with existing Nexus switches. If customers want an Application Centric Infrastructure or are exploring … new deployments, then the Nexus 9000 would be the recommended platform for choice along with the Application Policy Infrastructure Controller. In an ACI environment, the Nexus 7000 would function as the data center interconnects.”

“The Nexus 7000s still have a place in that interconnection point doing all the typical Layer 3, high-functionality pieces [that] we continue to associate with traditional networking tasks,” said Eric Hanselman, chief analyst with New York-based 451 Research.

Cisco doesn’t necessarily want customers to replace their networks with Nexus 9000s and ACI, Hanselman said. Instead, it wants customers to get their feet wet with the new technology. “They will sell the Nexus 9000 into data center pods or expansions and the Nexus 7000s will stay in the traditional core.”

Hanselman said product maturity will ensure Cisco remains committed to the Nexus 7000 and other pre-ACI Nexus switches. The features and functions of the Nexus 7000 will remain far more mature and reliable than the Nexus 9000 for some time, he said, adding that no one expects the Nexus 9000 to support MPLS any time soon.