Network engineers are always discussing the Nexus and Cisco Catalyst after Nexus 7000 was released. Some of them are accustomed to use the Cisco 6500 series, but those who are looking forward to Nexus mentions the newer line’s speed and virtualization capabilities.

Of course, each side has their reasons to select the one they preferred. So, should you use the Nexus or the Catalyst? Do you really need the Nexus 7000? 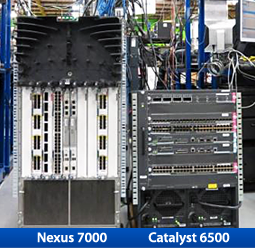 In fact, it depends. Both the Nexus and Catalyst lines provide a rich set of capabilities, so it all comes down to deciding which interfaces and features your business requires. Cisco may attempt to push the market toward the more expensive Nexus 7000 Series, but your decisions should be based on what your network needs.

Let’s make a comparison between CISCO catalyst 6500 and Nexus 7000 in many ways. You can get a better understanding of those two types of Cisco switches.

System Construction: The Nexus 7000 and Catalyst 6500, while both highly reliable core switching platforms, have a number of differences in physical construction.

Switch Fabric: The Catalyst 6500 integrates its switch fabric onto the supervisor itself, while the Nexus 7000 has the switch fabric located in a separate part of the chassis, independent of other cards. The effect of this is to make the Nexus 7000 supervisor a pure control plane module (i.e., it runs the OS and manages the system), with no forwarding capability on it at all. On the other hand, the Catalyst 6500 supervisor acts in many ways like a line card as well as the supervisor.
Interfaces: The available interfaces for the two platforms are so different.

100GbE: While both the Nexus 7000 and the Catalyst 6500 have 40GbE interfaces available, currently only the Nexus has a 100GbE line card available.

Line Cards: The Nexus 7000 has a fair number of compatibility issues with line cards compared to the Catalyst 6500. Because the various Nexus 7000 line card families present different feature sets, more care needs to go into a Nexus 7000 system to avoid incompatible line cards in the same system. Line card incompatibility can cause a reduction of capabilities or even line cards being shut down by the system.

Features: Both the Nexus 7000 and Catalyst 6500 share a common set of high-end L3 switching features, such as full routing protocol support, MPLS/VRF capabilities, and QoS capabilities. However, each platform has unique capabilities that often influence which platform to use.

Here are several common platform-specific features:
VSS (Virtual Switching System): VSS mode, a Catalyst 6500 feature, allows a pair of Catalyst 6500s to be joined together into one logical switch with a unified control plane. This allows for multi-chassis link aggregation and subsequently high availability, without Spanning Tree concerns. Compared to the vPC feature of the Nexus, the unified control plane aspect of VSS mode allows for the full system capabilities to be used on a multi-chassis EtherChannel, so L3 EtherChannels, MPLS awareness, full QoS capabilities, and other features are usable across both of the systems.

vPC (Virtual Port-Channel): vPC is one of the most commonly used Nexus features, and like VSS mode, it is used to provide multi-chassis link aggregation. However, vPC mode does operate differently, and as such, it has a different set of uses. The key difference is that vPC does not rely on a unified control plane, so both switches still operate independently. Because of this, layer 3 (L3) multi-chassis Ether Channels are not supported, and for L3 high availability, HSRP, or another router redundancy protocol will still need to be used.

Service Modules: The Catalyst 6500 has the capability to accept a number of service module line cards that can significantly extend the capabilities of the system. Some examples of service modules are the ASA-SM card, which provides high-throughput firewall capabilities, and the NAM cards, which provide a direct view of traffic traveling through the switch for reporting and analysis.

Virtual Device Contexts (VDC): This Nexus 7000 feature allows the user to partition the switch into multiple independent logical switches (up to four for a SUP1- or SUP2-based system, and up to eight for a SUP2E-based system). The VDC feature actually implements a separate control plane for each context, ensuring that each context is kept independent at a very low level. This allows for not just overlapping IP ranges, but also overlapping VLAN ranges. Other organizations use VDCs for device consolidation while maintaining departmental separation (i.e., the storage team only has access to the storage VDC, the security team only has access to the DMZ VDC, and so on). Because of this, there is no possible way to have VDCs communicate with each other, aside from physically connecting a port in one VDC to a port in another VDC.

WAN and Services Interfaces: Through the use of the 7600-SIP-200 or 7600-SIP-400, the Catalyst 6500 can support a wide range of WAN interfaces, from T1 to OC48, allowing even greater flexibility in how the switch can be used. For applications that demand fine-grained QoS or additional Ethernet services, some of the 7600 Ethernet Services cards are also supported.

Fabric Extenders: The Nexus 7000 supports the use of the Nexus 2200 Series fabric extenders to additionally expand the system and provide a large-scale virtual chassis in the data center. Up to 32 of the fabric extenders can be supported by the Nexus, which can greatly simplify management of a data center network.

Software and Licensing: The Catalyst 6500 is an IOS-based platform, providing the same command set and user interface as any other Catalyst series switch. Because the Catalyst 6500 has been in constant usage for over a decade, the software for the platform is a proven component of the switch. All Catalyst 6500 switches rely on Cisco’s traditional right-to-use licensing methodology.

The Nexus 7000, however, runs NX-OS; a fairly new hybrid operating system originally derived from the MDS 9000 line of Fibre Channel/SAN switches, and as such, has only been in use for a limited time in an Ethernet environment and is more likely to be affected by software bugs. NX-OS licenses feature on an à-la-carte basis, each activated via a chassis and feature specific license key. This license key model, like any other form of DRM, is a potential point of failure that can cause the switch to stop forwarding.