Hey, attention: “If Cisco Systems, storage partner EMC, and its virtualization and cloud minion VMware are all such good buddies in the Virtual Computing Environment, then why does Cisco need to buy Cloupia, a maker of cloud management software?”

With VMware, and therefore EMC, buying into the virtual networking space with the Nicira acquisition and Cisco forging partnerships with NetApp to build FlexPod alternatives to the VCE vBlock integrated server-storage-networking stacks; it looks like Cisco reckoned it had better get its own cloud management tools. Just in case.

And it was willing to shell out $125m to hedge its bets, just in case there are some customers who don’t want to use VMware’s virtualization and cloud tools – perish the thought – or EMC’s disk arrays – bite your tongue.

Cloupia is one of what seems like a zillion management vendors that have come out of the woodwork in recent years, taking on the management of virtualized and sometimes physical infrastructure. And in a way, it is coming back home to Cisco.

“Cloupia helps simplify the process of building a cloud. It’s a bit of a different strategy for Cisco, who for years never really paid much attention to management software,” said analyst Zeus Kerravala. “But over the last couple of years Cisco has invested a lot into management tools and I think they finally understand that IT is a lot more complex now.”

Raju Datla founded Jahi Networks, a maker of network management appliances, in 2003. At the end of 2004 sold the company to Cisco for $16m and took a job there for a few years. In 2009, Datla founded Cloupia to take on cloud management along with co-founder Raju Penmetsa, another former Cisco executive. The company is headquartered in Santa Clara, California and has a development lab in Hyderabad, India.

Cloupia uncloaked out of stealth mode in February 2010, and got the first beta of its Unified Infrastructure Controller out the door in May. The initial product could control freak atop VMware’s ESXi hypervisor, and added support for Rackspace cloudy servers soon thereafter.

The 2.0 release of UIC came out in June of that year, adding support for Microsoft’s Hyper-V hypervisor and Amazon’s EC2 compute cloud. That August, the UIC tool was certified to run on Cisco’s Unified Computing System (UCS) blade servers, and then Cloupia exposed its APIs so other cloud providers could link into UIC slices and manage them through their own control freaks.

This year, Cloupia expanded its control freak so it could boss around virty and physical NetApp FlexPod setups and now it also supports EMC’s VNX unified storage and VSPEX integrated stacks (the latter of which can have Cisco, IBM, HP, or Dell x86 servers in them, unlike vBlocks, which are based solely on Cisco servers).

Basically, it looks like either Cisco or EMC/VMware was going to eat Cloupia, and Cisco struck first. (As far as we know, anyway.) 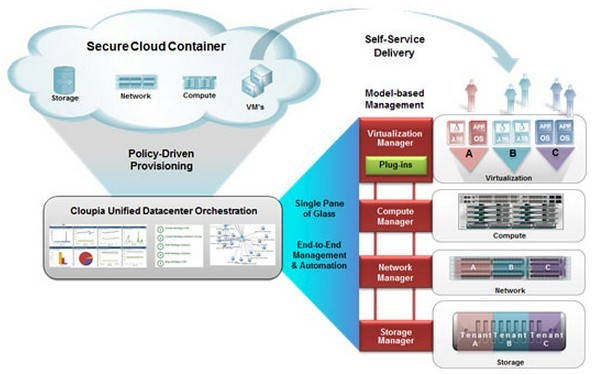 The UIC control freak is based on a resource manager that has plug-ins to physical machines running agent software, to hypervisors (KVM is now supported in addition to ESXi and Hyper-V), and clouds (Amazon and Rackspace are still the biggies).

The software has a self-service portal for allowing end users and departments to request infrastructure for their workloads, a service delivery orchestrator for scheduling it, chargeback features to make sure you pay for it, and operations automation and capacity analytics to make sure it runs well.

To its credit, Cloupia’s top brass have understood from the get-go that not all applications will be virtualized right now and yet have to be brought into the same management framework as the cloudy infrastructure. And that system admins want one tool and one pane of glass to manage both kinds of servers.

To close the deal, Cisco is paying $125m in cash plus retention-based incentives to buy Cloupia’s shares. The company has not received any venture funding so far as El Reg can identify. Cisco expects the Cloupia deal to close by December and will tuck the employees and UIC product into its Data Center Group, which is managed by former Sunner and Juniperer David Yen.

Cisco, EMC Team Up on IT Certification Program