You are here: Home 2013 February When Do You Use Static Routes?

Every router must have a route to know where to send traffic. We compare this to the post office’s predetermined ways to route your postal mail to its destination. When a router receives a packet from the LAN or the WAN, it must know the “next hop” where it needs to deliver that packet. That next hop is the IP address of the destination router. The router learns the next hop for packets by one of two methods:

Here is a sample routing table to help you visualize what I mean: 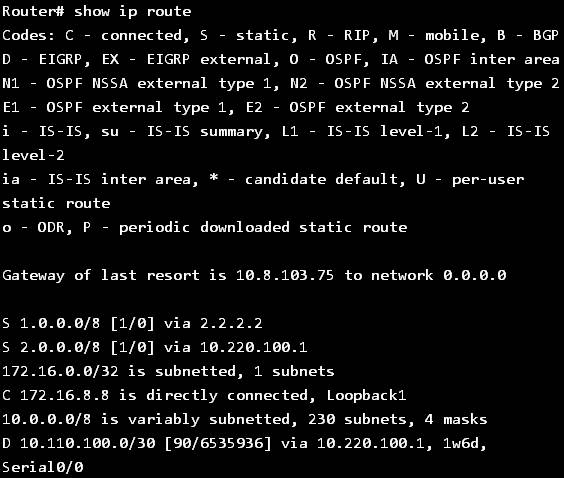 Here is an example of how to create a route on a Cisco router:

Notice how you enter the network, the subnet mask for that network, then the next hop for traffic.

Sometimes, a default route is called a 0/0 route, because it has a network address of 0.0.0.0 and a subnet mask of 0.0.0.0. Just like other routes, it must have a next hop. Here is an example of how to create a default route on a Cisco router:

Static routes could be considered more secure. Because you aren’t learning any routes from any other routers over the network, there is no chance that an incorrect or unsecured route will be learned by your router.

Don’t be fooled into thinking that static routing is always the best tool for the job, however. The greatest negative to using static routes is that they don’t scale as your network grows. This is because all static routes must be configured manually. Let’s say that you have four routers, and you add a new network on one router. For the other three routers to learn about this, you must enter three static routes. That doesn’t sound so bad, until you have 400 routers and add one new network. In that case, you would have to enter the static route on the other 399 routers. That is a lot of typing!

When Do You Use Static Routes?

As a network administrator, you should be familiar with how and when to use static routes. The ip route statement creates a static route. Static routes should be used in limited application but are very necessary in many network configurations.

David Davis (CCIE #9369, CWNA, MCSE, CISSP, Linux+, CEH) has been in the IT industry for 15 years.  This article reference from https://searchnetworking.techtarget.com/tip/Cisco-IOS-IP-routing-Static-routes

How to Configure GLBP in Cisco IOS Routers?