There are three sure things in life – death, taxes, and the insatiable hunger of people for more and more bandwidth.

By 2017, over 1.4 zettabytes of data will be flowing over global networks, Cisco said in its latest Visual Networking Index forecast, which it released on Wednesday. The annual survey predicted faster broadband speeds, more devices and connections, and more global internet videos. 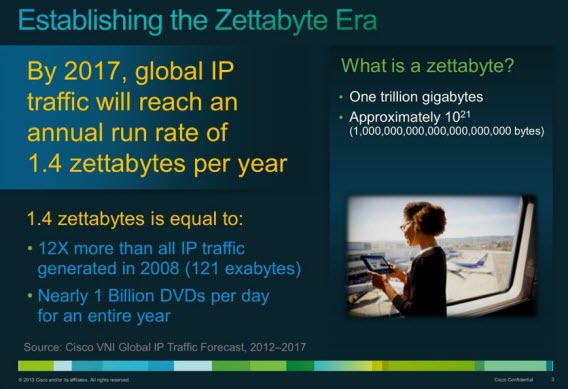 Cisco sells network gear, so its bread gets buttered by statistics pointing to a dramatic growth in data use, but the company’s VNI forecast is done with a reasonable methodology and has a lot of granular information that’s worth delving into.

By 2017, around 3.6bn people will be online, Cisco says, representing 48 percent of the world’s projected population. This is up from the 32 per cent (2.3 billion) currently, and slightly higher than the 3.4bn Cisco has predicted for 2016.

The number of devices and connections will grow as well, with the company projecting 19bn global network connections, up from about 12bn today. Many of these are expected to come from machine-to-machine technologies like sensors that are feeding data from the physical world into the digital.

The compound annual growth rate (CAGR) of machine-to-machine (M2M) modules as a component of overall internet traffic will be 82 per cent between now and 2017, along with 79 per cent for smartphones, 104 per cent for tablets, and 24 per cent for TVs. Some of the major applications driving the growth in M2M will be video surveillance, smart meters, chipped pets, digital health monitors, and others.

Broadband speeds should zoom ahead, with Cisco foreseeing a 3.5-fold increase from 2012’s average speed of 11.3Mbps to 39Mbps – just 961Mbps less than the speed Google is advertising for Google Fiber!

The economic miracles of China, India, and the smaller Asia Pacific companies will all conspire to grow their infrastructure, as well, and should see the region leapfrog North America on broadband speed.

Another way of looking at it is that although this represents a staggering infrastructure build-out, it’s still pitting the networking needs of 4.1 billion people against North America’s 380 million.

What Brings to Cisco While Internet Traffic to Quadruple by 2015