Preface: The advent of software-defined networking and increasing traffic volume puts new demands on networking equipment. So Cisco has 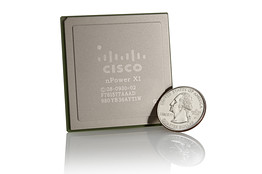 unveiled what it calls the world’s most scalable and programmable network processor, the nPower X1, which handles 400Gbps to keep up with increasing Internet traffic volume on Sept. 12.

As more people, processes, data and things become interconnected, Cisco released the world’s most scalable and programmable network processor, uniquely designed to power the Internet of Everything (IoE).

The architecture of networking hardware and software is going through big changes thanks to the advent of software-defined networking (SDN), which has the potential to make networks more flexible and reduce operational expenditure. The X1 was built to allow administrators to reprogram its functionality on the fly, according to Cisco.

12 Big Proposals for SDN IT Buyers