You are here: Home 2013 June Cisco Chambers: “IoE is the Next Big Transition for Businesses” 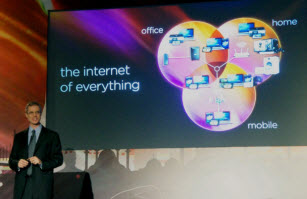 And he insisted that his company is uniquely positioned to help organisations take advantage of it.

In his keynote address 25 June at the Cisco Live 2013 show in Orlando, Florida, Chambers noted that over the past several years, the company has worked to transform itself from the world’s top networking vendor to the top IT solutions provider. In that time, Cisco has rapidly grown such businesses as cloud computing, collaboration, video and security, and has built up its software capabilities.

All of that has come as the company has continued to innovate around its core networking capabilities, looking to bring greater programmability, intelligence and application awareness to its offerings and embracing such trends as software-defined networking (SDN). Cisco on 24 June announced a refresh of some of its switch and router product families with capabilities that fall in line with the company’s push to make the network simpler and more flexible, programmable and application-aware.

The result is a broad architecture that far outpaces what other networking vendors – from Hewlett-Packard and Huawei Technologies to Juniper Networks and Avaya – have to offer, and will help businesses as they deal with the increasing speed of change and innovation, Chambers said.

“This is architecture. You can’t do that with individual products,” he said, adding that as Cisco has built out its capabilities, many of its networking rivals have remained with their product silos. “It is going to be an architectural race.”

It’s a message that Chambers and other Cisco executives consistently have been putting out, most recently at the company’s Partner Summit 2013 earlier this month in Boston. Cisco officials said that more than 20,000 people are attending Cisco Live, with another 250,000 attending virtually.

Cisco officials describe the Internet of Everything (IoE) as essentially whatever is connected to or crosses over the Internet, from people and devices to things and data. As more connections are made, the value to businesses goes up. By 2020, businesses will realise $14.4 trillion (£9.37tn) in profits from the IoE, according to Cisco executives, who have added that even in 2013, the IoE will generate more than $613 billion (£397bn) in profits. The opportunity is significant, according to Cisco officials, who have pointed out that currently 99 percent of the world is not connected.

The number of connections will continue to grow, as will the network’s role in helping organisations profit from those connections. According to Blair Christy, Cisco’s chief marketing officer, there currently are about 2.4 billion people and 20 billion things – from computing and mobile devices to machines – connected to the Internet. By 2020, those numbers will grow to more than 5 billion people and 50 billion things.

Chambers noted Cisco’s strong market positions of many of its businesses, from networking, cloud and video to IP telephony and mobility, and said that Cisco has seen growth in nine of its top 10 product portfolios. All these capabilities, which create an overall architecture, will help businesses adapt to new business models and the rapidly changing landscape, he said.

“It is a united framework that’s going to allow you to do this with budgets that will be extremely tight,” Chambers told the keynote audience.

More: Are you fluent in the language of the Internet? Take our quiz!