We divided the networks into two types: Local Area Network (LAN) and Wide Area Network (WAN). The two networks are generally classified on the basis of their coverage area.

Typically, a local area network exists in a house or a university campus, while a wide area network exists over many office buildings separated by a vast distance. The office buildings in a WAN may be in different countries or even continents. For example, the headquarters may be in USA, the regional office may be in the UK, and the branch office may be in India. The workers in these three buildings use a Wide Area Network to collaborate with each other. The Internet can also be considered as a WAN, with the Ethernet being a classic example of WAN.

In a LAN, computers and hardware such as printers can be connected by cable (copper wiring), fibre optic cabling (glass fibres) or using a wireless (radio waves) connection.

LAN and WAN play different roles in the networks. But what are their main functions and differences? Here let us check the main points of LAN and WAN.

We know that a Wide Area Network is not confined to one building. The computers and terminals forming part of the network can be spread around the world. External communication links such as satellites, microwaves, and telecommunication links and optical fibre will be used to connect the parts of a WAN. The connection must normally be paid for because the links are external.

The Internet is a worldwide WAN and a LAN can be connected to it using a router.

Revision points-you should be able to do the following:

What is a network?

An arrangement of two or more computers that are linked electronically so that they can communicate, share processing power and/or storage facilities. A network may include a dedicated file server, but does not have to.

State one advantage and one disadvantage of a WAN.

Advantages and disadvantages of WANs are the same as for LANs, but on a larger scale. WANs can share information around the world. The connection must normally be paid for because the links are external. Security is of particular importance.

When using a LAN, why is it necessary to have a password?

A password stops unauthorized users from logging onto the network or accessing another users files.

Describe the software that makes up a network.

A network is controlled by network software. This may be part of the operating system, or it can be designed specifically to manage the network.

Describe the devices that make up a typical network.

Cables and connectors are required to link hardware devices together, and network cards are built into computers used as terminals in a network. Other typical hardware devices that may form part of a standard network are: One or more computers acting as dedicated file servers or print servers, scanners and printers.
Quick Comparison: LAN vs. WAN /the Differences between LAN and WAN 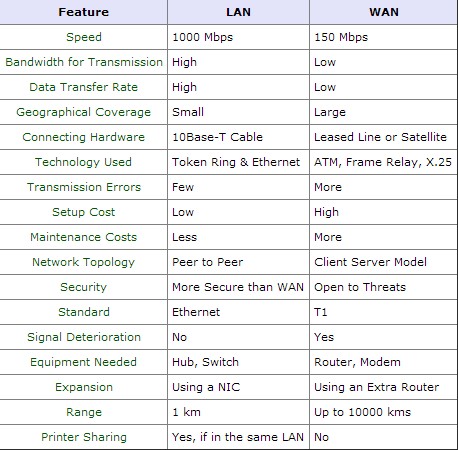