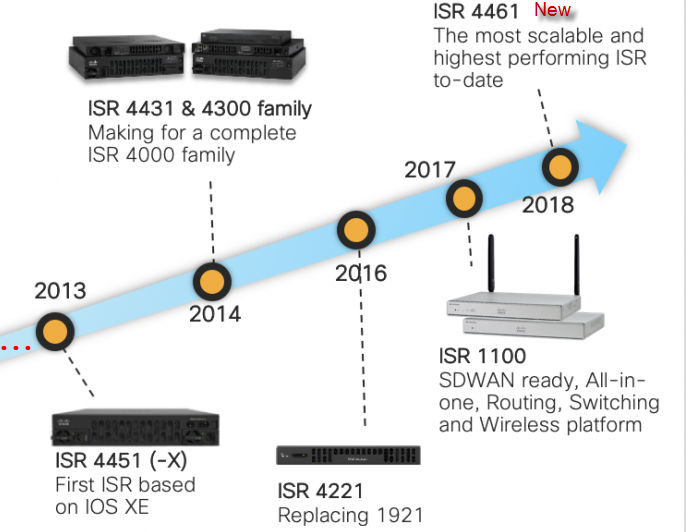 Read the general questions and answers to help you know the new ISR 4461 features. 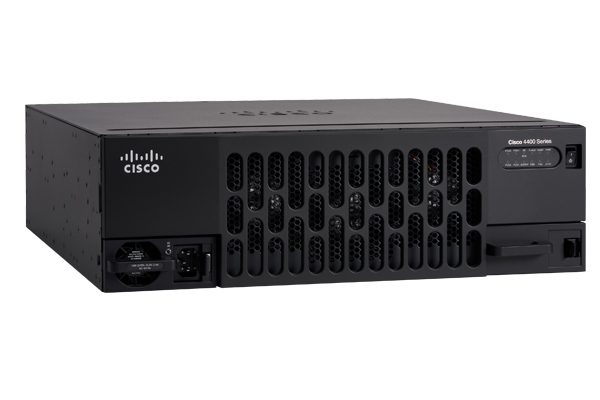 Q. Where do I position the Cisco 4461 and the 4451-X in comparison to the Cisco 3900 Series ISRs and the ASR 1000 Series Aggregation Services Routers?

A. The Cisco 4451-X is positioned for high-end enterprise branch offices or enterprise headend where there is a performance requirement of 1 to 2 Gbps with services (4Gbps without services). Performance-wise the Cisco 4451-X is positioned between the 3945E ISR and the ASR 1001. Similarly, the 4461 is proposed for branch locations where the router performance requirement varies between 1.5Gbps and 3Gbps with services (nearly 10Gbps without services) 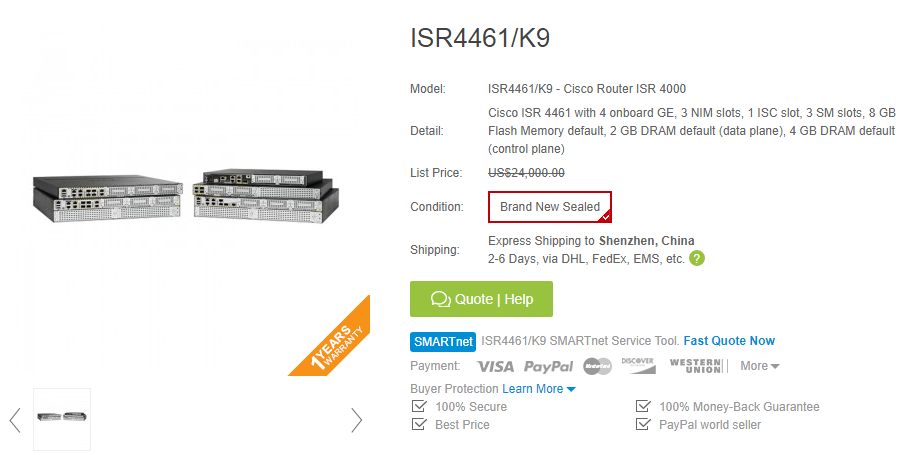 Q. What software are the Cisco 4461 Series ISRs capable of running?

A. Yes, the Cisco 4461 supports two 10Gbps on the front panel interfaces using either of Ethernet or Fiber Optics.

Q. Can I support more than one double-wide Service Module on the Cisco ISR 4461?

A. Yes, the Cisco 4461 supports upto two double-wide Service Modules (SM). However the same router can support only three single wide SM modules. Only one of the lower slots supports a single-wide SM module.

Q. What memory upgrade options are available on the Cisco 4461?

Q. How many Dual Inline Memory Modules (DIMMs) does the 4461 have?

Q. In the case of control-plane memory, can I put, say, a 4-GB DIMM in one slot and a 2-GB DIMM in the other slot?

A. Yes. You can configure auto-failover on any of the front-panel ports with both RJ-45 and SFP connections. When auto-failover is configured, if the primary interface type fails, either RJ-45 or SFP, the other media type becomes active and allows traffic to continue over the backup physical connection. In this scenario, the backup connection needs to be connected with the same speed and duplex as the primary connection.

Q. What type of backplane is used between components in the Cisco 4000 Series?

A. The 4000 Series uses multigigabit fabric (MGF) for Layer 2 connectivity between the modules. On the 4451-X, the MGF can provide either 2 Gbps to all NIM slots or up to 10 Gbps to all SM-X slots. The MGF is completely nonblocking and can forward in excess of 50 Gbps.

Q. What power cables work with the Cisco 4000 Series?

A. All power-supply options for the 4000 Series use a standard IEC C13 connector. No special IEC C15 cord is necessary for the Power over Ethernet (PoE) power supply because higher-efficiency power supplies (85 percent) are used in the 4000 Series. This cord thus helps lower the maximum current the power supplies can draw.

A. Yes. The power supplies can be replaced in the field.

A. Yes. You do not need to power down the chassis to insert or remove a power supply. Also, unlike the 3900 Series ISRs, the bezel and fan tray can remain in place while a power supply is replaced.

Q. Does the Cisco 4000 Series have a DC power-supply option?

Q. What are the power options for PoE on the Cisco 4000 Series?

A. The Cisco 4461, 4451-X and 4431 have two PoE options. Two of the FPGE interfaces can be powered with the addition of a dedicated power-conversion module installed into the system (PWR-GE-POE-4400). This module does not require a higher-capacity system power supply and will work with the default power supply. The PoE power for the FPGE ports is completely independent from PoE power to the rest of the system.

Q. What is the difference between PoE Redundancy mode and PoE Boost mode?

Q. With redundant power supplies, can we switch the power to primary when it fails and the router is running on the secondary power supply?

A. There is no concept of primary or secondary power supply for the Cisco 4400 series. The power supplies are simply redundant, so that when one fails the other Power-Supply Unit (PSU) takes over by transparently providing power to the entire system. No switching or intervention is required. Both share the load when running in the system; however, when one fails the other provides power to the complete unit. When the failed PSU is replaced with a new PSU in the system, the two power supplies are redundant.

Q. Are the PoE interfaces PoE+?

A. PoE+ is available on the new SM-X Ethernet switch modules as well as on the FPGE ports.

Q. How does the system fan speed vary?

Q. Can the Cisco 4000 Series ISRs handle the failure of a fan?

Failure of a power-supply fan will likely result in overheating and shutdown of the power supply. If power redundancy is required, you should install two power supplies in an ISR4400 series router.

Q. Is a rack-mount kit available for the Cisco 4000 Series? How do I order it?

Q. How can I calculate the Mean Time between Failures (MTBF) information for the Cisco 4451-X with the plugged-in modules? Is a MTBF calculator available, such as for the ISR G2 routers?

A. The MTBF for all the routers is listed on the data sheet at https://www.cisco.com/c/en/us/products/collateral/routers/4000-series-integrated-services-routers-isr/datasheet-c78-732542.html.

Q. What else is part of the default accessory kit?

A. The default accessory kit includes:

Q. What is the purpose of the GigabitEthernet0 on the Cisco 4000 Series?

A. The GigabitEthernet0 is the dedicated management port on the Cisco 4000 Series. This interface connects directly to the control-plane CPU and is ideal for managing the router through Telnet, Secure Shell (SSH) Protocol, Simple Network Management Protocol (SNMP), and other management protocols. It is also ideal for downloading software images, uploading logs, and connecting to other management devices such as RADIUS, Network Time Protocol (NTP), Domain Name System (DNS), Dynamic Host Configuration Protocol (DHCP), and TACACS servers. This interface should never be used for forwarding normal data traffic through the system because every packet goes directly to the control-plane CPU, bypassing the platform data plane. Because of this sensitivity, G0 is in a dedicated Mgmt-Intf Virtual Route Forwarding (VRF) port by default. This setup prevents accidental routing mistakes that could cause data traffic to be routed to the management network.

Q. Is a console port available on the Cisco 4000 Series?

Q. Is Online Insertion and Removal (OIR) supported on the Cisco 4000 Series?

A. Yes, OIR is supported on the Cisco 4000 [1]Series for the following scenarios:

Q. Will the NIMs and service modules continue to function as they normally do after OIR on a Cisco 4000 Series ISR?

A. Yes, provided the OIR was carried out using a like-for-like module.