You are here: Home 2022 May What are POE Switches? ｜ 5 Things You Need to Know

As technology advances, so does the need for efficient networks in the telecommunications industry. POE switches are one of the key elements. The features, advantages, and limitations of POE switches are described below. Let everyone know more about POE switches

What is a PoE Switch?

A PoE switch is a conventional Fast Ethernet or Gigabit network switch with integrated Power over Ethernet. Power over Ethernet switches not only support communication between network clients, but also power powered devices. This key feature of PoE can save businesses some of the cost of installing electrical and network cabling. According to the port number, there are 8, 12, 24-port PoE switches and 48-port PoE switches commonly found on the market. When moving to the network control level, both unmanaged and managed PoE switches can be used. PoE switches can be used in various places, from home to office, from indoor to outdoor. And it can transmit power and data to different devices at the same time.

Why You Need a PoE Switch?

Injectors or other midspan PSEs can receive data signals while adding power when connected to a cable other than a PoE switch, and then pass the data and power to the PD (powered device). A power cord is also required during this process. But a PoE switch only needs a switch power cable and a network cable connected to the PD to send data and provide power. 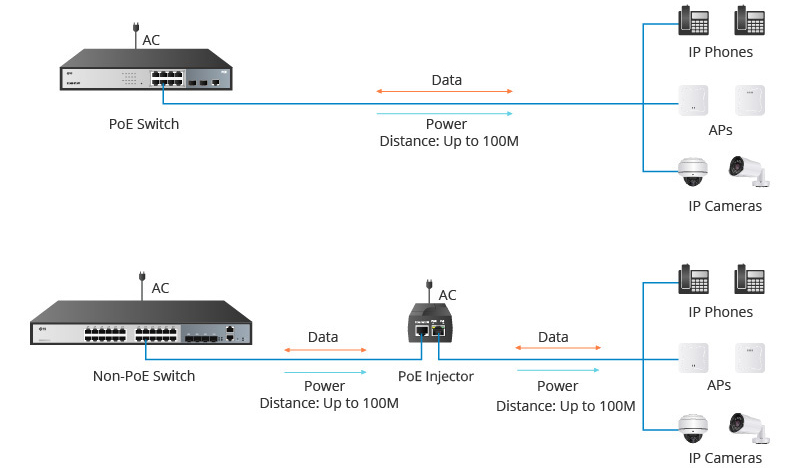 Unlike non-PoE switches that require additional PSEs and extension cables, PoE switches provide users with great flexibility in network cabling and simplify the deployment of the entire network. You don’t need extra power cords, which helps you reduce infrastructure costs. PoE switches maximize the use of power resources because power consumption is automatically detected, so only the power required is supplied, reducing power waste. Good PoE switches also support Simple Network Management Protocol (SNMP), which provides an easier way to supervise and manage the switch.

But that doesn’t mean PoE switches are perfect. The distance of PoE switch transmission through Ethernet is generally up to 100 meters. In large facilities, this is not enough. However, if you have an extender, the data transfer can reach 1,219 meters. Also, while technology is advancing, not all technologies have reached the status of PoE. If your device is not PoE compliant, you will need an injector/ splitter. If you need to deliver high power through a PoE network, you must ensure that the power capacity of the PoE switch meets your needs because of power limitations based on PoE standards and PoE power. 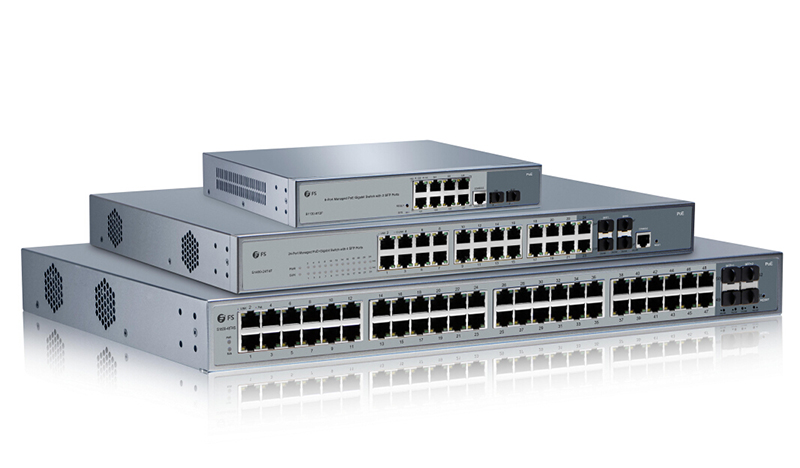 There are several types of PoE switches: unmanaged, smart, and managed.

Unmanaged PoE switches are ideal for home networks or small business offices. They can’t modify the configuration, so you don’t need to worry about enabling or disabling interfaces.

Smart PoE switches are also used in smaller networks but with full security features. The functionality of these switches is limited. They offer QoS and VLANs and are ideal for labs and small workgroups.

Managed PoE is used in data centers and large networks. It is complex and has full management and security features. As a result, the level of network security, control and management is high. These are the most expensive PoE switches.

Managed vs Unmanaged Switches｜What’s the Difference?