GBIC (gigabit interface converter) is a transceiver that converts between electrical and optical signals for high-speed networking. 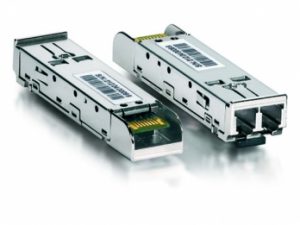 A gigabit interface converter (GBIC) module is available in many forms depending on the model and brand manufacturer. Each has the same job, which is increasing the transfer speed of data over a network. Companies who need large amounts of data transferred quickly sometimes use a GBIC module for increased control and cost-effectiveness.

A GBIC module acts as a transceiver that turns electric currents into optical signals, before changing those optical signals into digital electric currents, as stated by searchcio-midmarket.com. The process was created to simplify switch and hub design. Each GBIC module is in place for making system administration of electro-optical communication networks easier. These modules plug directly into a system. They were first designed to support Fibre Channel data networks but are also used with Gigabit Ethernet setups. This device made it possible for users to avoid buying fully populated switching equipment.

Data transfer rates vary on GBIC module model specifications, but they have a minimum of 1 gigabit per second. Manufacturers, such as Cisco, make GBIC modules with varying transfer speeds.

A GBIC module allows a user to reconfigure fiber links, configure tailor receiver costs, link networking distances and organize network topologies based on set requirements. Used on a fiber optic or an Ethernet system, GBIC modules can be upgraded, swapped out or plugged in without turning off the computer. This flexibility eliminates the need to replace entire system networking boards.