You are here: Home 2012 January IT Demands More of Networks, Rivalry between Cisco & HP More Intense

As cloud computing, consumerization, and mobility boost demands on enterprise networks, HP and Cisco will escalate their battle to supply the IT infrastructure. 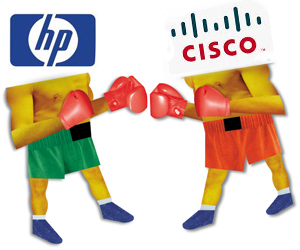 Across IT, many observers have identified three broad trends going forward: mobility, cloud computing and the consumerization of IT. When it comes to networking, these trends are expected to drive demand for more bandwidth capacity and, increasingly, wireless network architecture. In addition, 2012 is expected to see a continuation of the intense rivalry between industry leaders Cisco Systems and HP, as the latter tries to chip away market share from the former.

The combined trends of mobility and consumerization will force network administrators to invest more in wireless networks and less in wired networks because of the simple fact that tablet computers don’t have Ethernet ports, notes Saar Gillai, CTO of HP’s networking business. “Tablets don’t have cable,” Gillai says, adding that younger workers, in particular, are increasingly bringing their tablets to work with them. “A tablet is something they expect, not something that’s new and exciting. If their primary tool is something they can’t connect to the network, it’s going to be a problem for them.”

At the same time, newer smartphones are usually equipped to connect to the Internet via Wi-Fi at a user’s home, workplace or in public places instead of just on the carrier’s network, he adds, which will increase workload demands on Wi-Fi networks. Also, as mobile devices become more powerful, they are used for more sophisticated applications, such as videoconferencing, requiring even more bandwidth.

Demand for higher-capacity networks is also driven by cloud computing, be it on public or private clouds, Gillai says, noting that legacy network technology is being replaced by network fabrics that offer multipath connectivity for ever-increasing loads. But while HP is offering technology such as Intelligent Resilient Fabric (IRF) that aggregates multiple switches to act as one, he says, other HP innovations are more long term.

In the rivalry with HP, Cisco has positioned itself as the innovator in networking while portraying HP as the provider of the “good enough network.” Conversely, HP has touted itself as the best alternative to Cisco’s market dominance. “Customers need to have choice. If customers have choice, we believe we will win more often than not,” Gillai says.

While HP claims to be taking market share from Cisco, the record is actually mixed. HP touts market share gains that it says are at the expense of Cisco, but it has lost market share more recently. While HP’s share of the Ethernet switch market –just one component of all networking technology–reached 12%, based on revenue, in the first quarter of 2011, it fell to 10% in the third, according to numbers from Dell’Oro Group.

Cisco CEO John Chambers pointed that out in an address at Cisco’s shareholders meeting Dec. 9, after mentioning Cisco share of 72%. “And HP, who is one of the competitors who has said they were going to leave us behind, shrunk by 2%,” Chambers said.

But HP can also claim success by other measures, says Chris DePuy, a WLAN research analyst at Dell’Oro. Cisco enjoys a 54.6% share of the WLAN market, based on units, in North America, but only 22% in the Asia-Pacific (APAC) region. HP has only a 5% share in North America but a 27% share in APAC, exceeding Cisco’s. DePuy attributes that primarily to the operations in China that were formed as a joint venture (called H3C) between 3Com and Huawei that HP inherited when it acquired 3Com in 2010.

In the broader global enterprise WLAN market, Cisco remains the undisputed leader, with 51% market share, based on revenue, to HP’s 7.5% share, in the third quarter of 2011. Cisco’s share is down from a high of 59.4% in the fourth quarter of 2010, which could give some credence to HP’s claims that it’s winning business away from Cisco, except that HP’s share has stayed in the 7.3% to 7.5% range during the last year. Dell’Oro numbers do show other WLAN vendors–including Alcatel-Lucent, Aruba Networks, Motorola Solutions, Ruckus and a number of small start-ups–gaining share.

“You have a percent here, a percent there, a couple of the small players are growing fast. It’s not like you have some big monster breathing down the neck of Cisco. They have more than half the market. They’re just losing a little here and a little there,” says DePuy.

More Related: Awesome, What Happened to Networking in 2011?