You are here: Home 2012 February Cisco, After Google, at Top of Green IT Rankings

Greenpeace released the latest version of its Cool IT Leaderboard, tracking progress among 21 IT companies in embracing green energy for their own operations as well as advocating for policies that promote clean energy use worldwide. 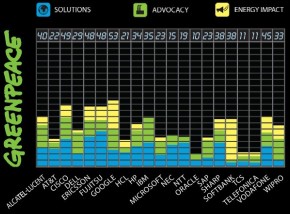 Google came out on top of the rankings this year, scoring 53 points out of a total 100. Cisco moved from first to second with a score of 49, and Ericsson and Fujitsu tied for third place with 48 points earned.

Greenpeace started evaluating ICT brands through its Leaderboard in 2009, primarily to identify those companies that are making an effort to drive change in the energy sector. The Leaderboard also examines how the companies use their influence to change government policies regarding clean energy.

Quote: “According to the report: “The fifth version sees a steady increase in the quantity and strength of energy solutions offerings from many companies such as Cisco, IBM, Ericsson and Fujitsu, we also see a significant reduction in policy advocacy to change the rules to drive investment in clean technology and renewable energy deployment.”

The rankings in order of great to pretty good (since all these companies are praisworthy) are shown in the following table:

The companies in the Leaderboard were evaluated in three key areas:

Overall, the latest rankings show a steep decline from the fourth round of scores, which were published in December 2010, during the Cancun climate talks. Cisco led the prior round’s pack with a score of 70, while Google held down fourth place with a score of 47.

The decline in overall scores reflects what Greenpeace calls a lack of steady progress in the greening of IT, even as demand for IT services, particularly in cloud computing, is rapidly increasing.

“While we see a steady increase in the quantity and strength of energy solutions offerings from many companies such as Cisco, IBM, Ericsson and Fujitsu,” Greenpeace writes in the intro to the report, “we also see a significant reduction in policy advocacy to change the rules to drive investment in clean technology and renewable energy deployment.”

That finding tracks alongside what we have uncovered in two recent reports published by GreenBiz.com: In the State of Green Business 2012, we found that progress has slowed, stalled or even reversed on a number of fronts, suggesting that much of the progress made in recent years were driven more by the economic downturn rather than a stepping-up of commitments from companies.

Secondly, the results of the GreenBiz Salary Survey in 2011 found that forward-looking companies are indeed committed to internal sustainability efforts, but that the one area they’ve cut back funding and personnel hours is in advocating for policy changes.

All of which underscores the importance of companies that are actively engaged not just on their own operations, but on calling for greener policies. Greenpeace offers effusive praise for Softbank, a Japanese telecom and internet company making its first appearance on the Leaderboard. The company, which scored 38 out of 100, dominated the Policy Advocacy section of the leaderboard with 33 out of 35 total points.

Softbank’s chairman, Masayoshi Son, has been outspoken about his company’s, and his country’s need to shift to renewable energy in the wake of the devastating tsunami and nuclear meltdown in Fukushima last spring. Son has actively apposed a Japanese business group’s energy priorities, and work to amend its corporate charter to become a power generation firm, with the goal of lauching a solar power subsidiary.

Although Softbank is leading Greenpeace’s rankings for policy efforts, the company is only slightly trailed by Google, which leads the pack with a score of 53. Google’s boost — up from 47 in a round featuring much higher overall scores — comes largely from its big disclosure of its energy footprint, coupled with its major investments in clean energy.

Among the other highlights from the latest Cool IT Leaderboard:

Cisco, Ericsson, and Fujitsu stand out once again in the solutions criteria for providing detailed case studies of how their unique technology is creating pathways towards significant emission reductions.

Google, Cisco, and Dell stand out for sourcing over 20 percent renewable energy globally for each company’s infrastructure.

Alcatel-Lucent debuts on the leaderboard in sixth place, earning high points for its efforts to reduce its own energy impacts

Oracle remains in last place in the rankings with a score of 10; Greenpeace says that the company “holds significant potential to be a leader in the ICT sector, and seems to recognise that its customer base is increasingly moving towards more environmentally sustainable practices. However, the company is currently failing to realise its potential to help its customers measure and manage its energy use.”

Other notable omissions are Apple and Facebook, but for two very different reasons. Apple continues to fail to live up to Greenpeace’s expectations for using its platform as the world’s largest, and one of the richest, companies to push its customers, suppliers and policymakers to step up their efforts to reduce their energy impacts.

Facebook didn’t make the latest round of the leaderboard because the actions the company took last December — including energy efficiency and clean energy for its data centers as well as promoting more efficient IT through its Open Compute Project — happened too late to make the cut for the Cool IT Leaderboard.

Both Apple and Facebook will be included in Greenpeace’s second annual “How Dirty Is Your Data” report, which profiles energy use by cloud computing providers, and which will be published in April.

PDF files: More Details of the Cool IT Leaderboard rankings

After Salesforce.com, Cisco is the Second Popular Company in Silicon Valley