Note: Greenpeace is the leading independent campaigning organization that uses peaceful protest and creative communication to expose global environmental problems and to promote solutions that are essential to a green and peaceful future.

Greenpeace based the rankings on three main criteria—climate solutions, carbon footprint and political policy and advocacy.

Cisco and Google have tied for first place in Greenpeace’s latest ranking of IT sector climate leadership.

Google and Cisco both scored 58 out of a possible 100 on Greenpeace’s sixth Cool IT leaderboard after logging gains of five and nine points respectively over their 2012 rankings. The top five is comprised of Ericsson, which finished third, Fujitsu in fourth and Sprint. There are a total of 21 firms ranked on the leaderboard. 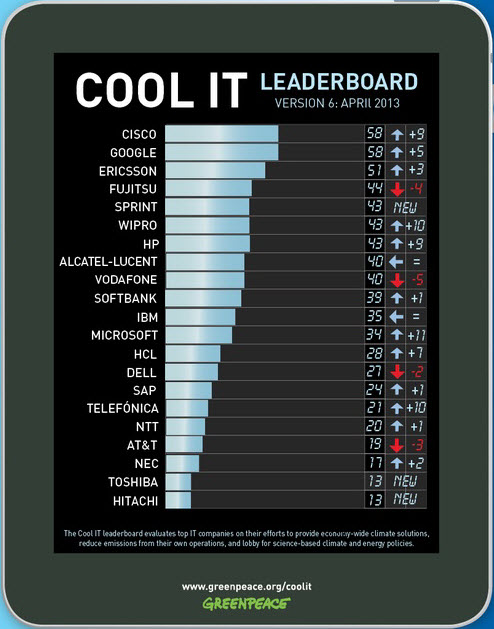 Related Reading: Cisco, After Google, at Top of Green IT Rankings

Cisco’s leadership improved across each of the three evaluation areas, particularly for its updated commitments to manage its energy footprint and increase the amount of renewable energy powering its operations, Greenpeace says

Greenpeace says that Google’s continued advocacy for clean energy and willingness to “put its money where its mouth is” helps keep it a top the CooI IT Leaderboard for the second year in a row. Google’s clean energy investments, now topping $1 billion since 2010, illustrate that corporations can play an important role in providing a new and much needed source of capital to the renewable energy sector, Greenpeace says. Google’s continued “strong leadership” in making clean energy investments has not only driven significant deployments of renewable energy, but also enhanced its standing as a credible corporate advocate for stronger clean energy and climate policies, Greenpeace says.

The internet giant scored 22 out of a possible 35 on political advocacy–better than any other company on the leaderboard – and 19 out of a possible 25 for its IT energy impact, putting it second in that category only to Cisco. However, Google ranked just seventh in the climate solutions category with a score of 17 out of 40.

The ranking comes in the same week that Google and fellow tech giant Facebook announced major green IT projects. Google this week committed an additional $600 million investment in its Lenoir, N.C., data center site, and said its local electricity provider, Duke Energy, has pledged to develop a new program for large companies like Google that want to buy renewable power for their operations. Facebook meanwhile in planning a $1 billion data center in Iowa that experts are predicting to be the world’s most technologically advanced.

Facebook is not in the ranking as Greenpeace says the firm is “not yet offering services that can directly help us use our energy smarter and cleaner.”

Cisco, After Google, at Top of Green IT Rankings