PAT is the many-to-one form of NAT implemented in many small office and home networks where many internal hosts, typically using RFC 1918 addresses such as 192.168.0.0/24, share a single external address on the public Internet. Static NAT is a one-to-one mapping which is used when an internal host needs to be accessible from the public Internet or some other external network.

This is based on ASA software Version 9.0(1) and applies to Version 8.3 and later.

Use the following diagram with this documentation. This diagram uses RFC 1918 addresses. In the real world, the outside interface would most likely be configured with a registered, public address.

There are four steps involved in enabling static NAT:

4. Apply the ACL to the outside interface using the Access-Group command: access-group OutsideToWebServer in interface outside. This is the complete configuration:

When successfully implemented, this configuration will permit a host on the outside network, such as the public Internet, to connect to the internal Web server using the address on the ASA’s outside interface.

Configuring the ASA with Multiple Outside Interface Addresses

It is not possible to assign multiple IP addresses to the outside interface on a Cisco ASA security appliance. It is possible, however, to configure the ASA to forward different outside addresses to different hosts on the inside network.

For example, you have a /29 block of addresses assigned by your ISP. Also, suppose you have a mail server using POP3 and SMTP and a Web server using HTTP and HTTPS on the inside network. You want each of the servers to be reachable via different outside addresses. You can configure static NAT to accomplish this (see diagram, and again, in the real world the outside interface would probably be configured with registered, public addresses instead of the RFC 1918 addresses shown here). 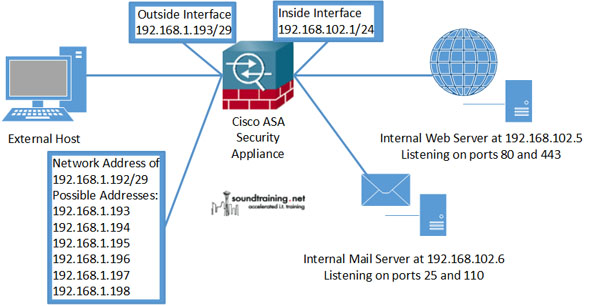 The steps are similar for single-address static NAT configuration:

1. Configure network objects. Configure a network object for each internal host with a static NAT static statement specifying the outside address to be used and the service types (port numbers) to be forwarded. These identify the internal hosts, the desired outside IP address, and the type of service to be forwarded. (The exclamation marks are for formatting to improve readability and are not required for the configuration.)

3. Apply the Access-Control List to the outside interface with an access-group statement.

access-group OutsideToInside in interface outside

Here is the complete configuration:

How to Configure Static NAT for Inbound Connections?