Cisco has unveiled its third generation CRS system-the Carrier Routing System-X (CRS-X) with 400 Gbps of slot capacity this week. It is the latest core router. When it comes to big, fast routers, Cisco’s CRS family has helped to pioneer the space.

Cisco is introducing a new router that will be able to handle the dramatic increase in demand for Internet downloads.

The Cisco CRS-X, which will be available this year. The system will use the company’s new CPAK optical transceivers to support 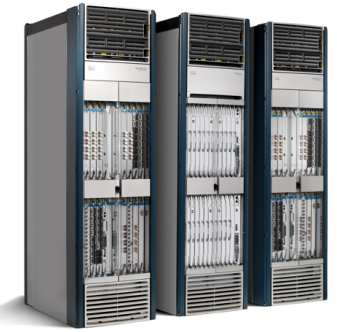 400 Gbps per slot. The system capacity will be able to expand to nearly 1 Pbps in a multi-chassis deployment. The result is a system with 10X the capacity of the original CRS-1, which was introduced in 2004 as a new class of core routing system designed to scale network capacity to accommodate the proliferation in video, data and mobile traffic, which has taken place over the last decade.

The CRS family of routers focus on extreme scale, and the CRS-X is no exception. One standard 7 ft rack chassis CRS-X deployment can deliver up to 12.8 terabits per second. The system can be clustered together in a massive configuration of up to 72 chassis, which would deliver up to 922 Tbps of throughput. The original CRS-1 in a similar clustered configuration could only scale up to 92 Tbps.

The CRS-X delivers such massive scale thanks in part to an enhanced fabric backplane that can enable a new generation of line cards. The CRS-X can now handle up to 400 Gbps per slot, up from only 40 Gbps on the CRS-1 and 140 Gbps on the current CRS-3.

The CRS-X line cards employ Cisco’s new CPAK CMOS photonic technology, which is designed to reduce power consumption and the cost of sparing. Interfaces on these line cards can be configured for either single port 100GE, 2x40GE, or 10 x10GE and either short-, long-, or extended-reach optics by selecting a specific CPAK transceiver, Cisco says.

The remote virtual line cards are provisioned and managed as distributed line cards of the host CRS-X routers. This allows operators to provision the bandwidth they need with a single management and control plane, Cisco says.

Cisco did not disclose pricing for the CRS-X. It will go up against Juniper’s T4000 and PTX core routing systems and perhaps Alcatel-Lucent’s 7950 XRS.

Mike Haberman, vice president of network operations, Verizon Wireless: “The Cisco CRS provides Verizon Wireless with an intelligent core solution and the ability to scale up to 400 Gbps per slot, which will meet our service demands well into the future.”

“We are very pleased at the continued development of the Cisco CRS platform, which has served as the foundation of our advanced network infrastructure for many years. With the ability to scale to 400 gigabits per second and highly available architecture, the CRS continues to provide unparalleled investment protection and help ensure SoftBank Mobile’s ability to remain one of the leading broadband content and service providers in Japan.”

“Cisco’s flagship networking platforms are designed with investment protection for decades and beyond, unlike other technology providers, which force operators to rip and replace their products on a regular basis.  Service providers, large educational and research networks, and government agencies around the world are preparing for the next-generation Internet and the increasing demand for video, collaboration and distributed computing.  Cisco CPAK technology and 400 Gbps per slot CRS-X demonstrate Cisco’s commitment to leading the industry in IP core technology and protecting the investment of our existing CRS customers.”