802.11ac is the next generation of Wi-Fi–the fifth, to be specific–and it is expected to be at least three times faster than 802.11n–in theory, as much as 10 times faster. The theoretical maximum speed of 802.11n is 600Mbps while 801.11ac boasts about 6.93 Gbps, although in reality that figure will be much lower, especially as the client devices get further away from the APs. Today, 802.11ac is a draft specification, with final 802.11 Working Group approvals and publication scheduled for late 2013/early 2014. However, there are already several APs and client devices out there.  Client devices include Apple’s latest MacBook Air, Samsung Galaxy S4, and the HTC One. 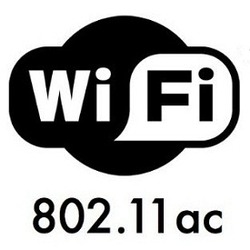 Simply put, Wi-Fi works by transmitting and receiving data streams using 20 MHz spectrum “spatial stream.” In 802.11n, the data streams that span the 20 MHz spectrum do so at 75 Mbps. To get more than 75 Mbps, two techniques are used–channel bonding and spatial stream multiplexing. In 802.11n channel bonding is done by combining two 20 MHz streams to get 40 MHz spectrum, or bandwidth of 150 Mbps per stream. With 802.11ac, more channels are bonded to get 80 MHz and eventually 160 MHz spectrum, which can carry 433 Mbps and 866 Mbps per stream, respectively. (Note: today’s 802.11ac devices do not support the 160 Mhz spectrum).

Current 802.11ac devices in the market place are based on the first generation 802.11ac chipsets, known as wave-1. These devices currently perform at almost the same bandwidth as 802.11n because of the limitation in wave-1 chipsets. The limitations include: support of three streams maximum (rather than eight), no multi-user MIMO, and no 160 MHz wide channel support.

Operating in the 5GHz band. In the US, 5.0 GHz offers 23 non-overlapping channels and has less noise, which means higher bandwidth. However, it also means it has shorter range and does not penetrate solid objects well. This means more APs are needed.