You are here: Home 2013 July The RIGHT Cisco Data Center Switches for the Cloud

Cloud data centers have unique requirements, and selecting the right hardware as the backbone is critical for guaranteeing agile and scalable cloud services. Data center switches can enable high-speed access to applications and services that customers expect, but different cloud providers will have unique switching needs. 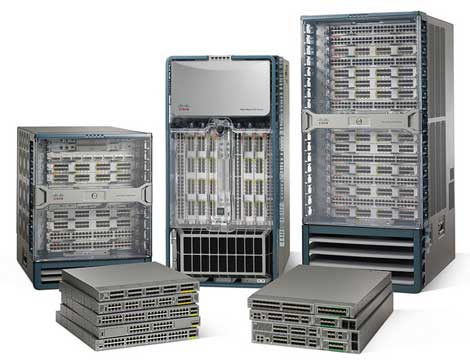 The right infrastructure on the back end allows cloud providers to offer competitive service-level agreements. While service providers have data center requirements similar to those of a large enterprise, providers are the first to break the boundaries of scale, said Shashi Kiran, senior director of data center, cloud and open networking solutions for San Jose, Calif.-based Cisco.

Many Cisco provider customers that are starting from scratch – or are upgrading their cloud data center infrastructure — are leaning towards the Cisco Nexus switches, the flagship switch series of the company’s data center portfolio that offer a high degree of scalability and capacity, said Eric Hanselman, chief analyst for London-based 451 Research.

The Nexus 7000 switch provides 1, 10, 40 and 100 Gigabit Ethernet (GbE) scalability and up to 17 Tbps, making it well-suited for the data center, Cisco’s Kiran said. Cisco’s new Nexus 7700 has a similar feature set as its 7000 predecessor with 10, 40 and 100 GbE ports, but offers over 83 Tbps. “We increased the throughput for each of the line cards by almost 2.5 times from what it has been before, so there has been a significant performance jump,” Cisco’s Kiran said.

The Nexus 7700 switch series is also environmentally conscious. The efficient 3-kW power supplies allow for flexible power provisioning, and the fan trays in the switches adjust to changing temperatures. “There is a 33% decrease in energy consumption with this switch,” Kiran said.

Cisco also has a data center core option for high-density, but space constrained, virtual and cloud environments — its Nexus 6000 series. This switch offers 10 and 40 GbE scalability at a lower price and in a compact form factor. “Unlike large, chassis-based switches, the 6000 is purpose-built and has fixed-functions so [providers] can’t mix and match capabilities like they could with larger switches,” 451’s Hanselman said.

While investment protection and scalability is important, many providers have Catalyst switches in their environment. Even though Cisco now markets the Catalyst line for campus switching, the Catalyst 6800—Cisco’s latest addition to the Catalyst family–can still have its place in the data center, Hanselman said.

It’s possible to have the similar feature set with the Catalyst series that the Cisco Nexus switches offer, but providers may have to invest in more Catalyst switches to reach that higher level of throughput, Hanselman said.

Most service providers are at the point where they know they need to make the transition to Nexus switches, Hanselman said. “The real question is: What’s involved in making that shift?” he said.

Many Cisco provider customers have been using Catalyst switches for years and are familiar with Cisco’s IOS software. A large obstacle for many providers in moving to Nexus switches is the new NX-OS Software.

“Nexus is still very much the new kid on the block, and routing and switching transitions typically move very slowly,” he said. “There are good reasons for making the move to Nexus, but there are still a set of unknowns for any provider that’s been running IOS — like retraining staff on the new software,” he said.

The size of the provider, or the services being offered could help determine what switch series a provider needs. “It’s a matter of what size [switch] that cloud environment requires and how much growth that provider predicts,” ESG’s Laliberte said. “The Nexus line — especially the Nexus 7700 — gives providers a lot more room to grow.”

Providers that have increasingly dense environments may find that space, cooling and power constraints will dictate a move from Catalyst to the higher-density, energy-efficient Nexus line, 451’s Hanselman said.

“Providers can architect and build out high-density networks with just Catalyst 6000’s, but they consume a lot more power to give the cloud provider the same capabilities that could be consolidated and managed more simply with Nexus switches,” Hanselman said.