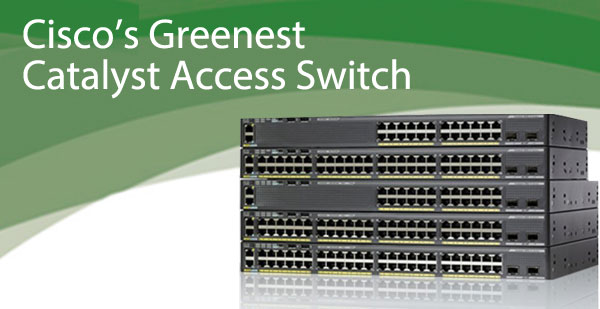 Cisco’s Catalyst access switch, the 2960-S/SF is the most widely deployed Ethernet switching platform in the world. It’s a hardware platform that offers 40Gbs of stack bandwidth, enough to support a stack of four switches, 2MB of buffer memory and four hardware queues. But while this platform has served Cisco’s customers exceedingly well.

The new Catalyst 2960—simply called the Catalyst 2960-X. Cisco promises that the 2960-X will double every benchmark of the 2960-S, as well as add a series of features that improve the platform’s ability to scale intelligently while increasing security and simplicity of deployment and operations. Here we will review the latest edition of the most popular access switch on the planet, the Cisco Catalyst 2960-X.

Why is Cisco introducing a new Catalyst 2960-X when its existing product set is doing so well? The short answer is the networking market, and IT, in general, is changing, and Cisco needs to keep ahead of these trends. Consider that IT organizations across the world are working to transition from an operational posture to being a catalyst for business transformation.

It’s a well-known fact that 80% of network engineers’ time is spent configuring and optimizing network devices. The Catalyst 2960-X seeks to provide operational relief through simpler operations. As BYOD was the number one IT spend over the last few years, securely on-boarding iOS and Android devices is a main concern of IT business leaders. The Catalyst 2960-X addresses secure on-boarding BYOD with a new feature set, discussed below. In addition Local Area Network (LAN) bandwidth requirements continue to increase while the cost of LAN bandwidth drops.

That is, as network traffic increases, thanks to video, BYOD and desktop virtualization plus 10GbE price per port falls, many network architects are adding 10GbE uplinks into their access network design. Therefore, in the LAN market, network operations need to be simplified, BYOD support is fundamental, and LAN bandwidth demands continue to grow.

The Catalyst 2960-X is equipped with increased scale in terms of performance, port density and network services. Finally, IT designers seek to build smarter and greener networks that are programmable, automated and application plus context aware to address a wide range of business requirements. The Catalyst 2960-X will have OpenFlow, onePK, EnergyWise and other intelligence, making it potentially the smartest fixed access switch on the market.

To accommodate all of the above, the new Catalyst 2960-X is doubling the capabilities of the Catalyst 2960-S’s hardware platform. That is, the 2690-X sports 80Gbps of stack bandwidth, which now enables eight switches to be members of a single stack. Buffer memory is now 4MB while the number of queues is eight, offering a wider range of quality of service options.

The form factor offers 24 or 48 ports of triple speed 10/100/1000 Mbps Ethernet plus 4x1GbE or 2x10GbE uplink ports. Both PoE and PoE+ are supported too. The 2960-X is equipped with a dual core CPU and dual field replaceable power supplies for increased availability.

Just like the Catalyst 6500, the Catalyst 2960-X offers investment protection through backward compatibility with the 2960-S/SF, where both 2960-S/SF and 2960-X can be members within the same stack. The increased CPU, buffer and queue depth enable a range of new services to be added to the 2960-X that can be categorized into smart, simple and secure.

Smart: To increase visibility of applications flowing throughout the corporate network and to provide network engineers better network traffic control, Cisco added NetFlow-Lite support into the 2960-X. That is, now network engineers will have a full end-to-end view and control of application flows from the point of access to egress, thanks to NetFlow support in access switching.

In addition, IP Lite or layer 3 routing is now offered in the 2960-X, providing RIPv2, OSPF and EIGRP routing plus Protocol Independent Multicast PIM for multicast, policy-based routing and redundancy with HSRP or Hot Standby Router Protocol. IP Lite offers a new range of network design options that were never offered at the access switch level. The 2960-Xs are also programmable access switches as they are OpenFlow and onePK Ready.

In addition to NetFlow Lite, layer 3 routing and programmability, Cisco is adding new green features, such as innovative hibernation modes, Energy Efficient Ethernet and EnergyWise support. This package of smart services makes the 2960-X both intelligent and green.

Simple: To simplify network operations at the access switch level, Cisco added its smart install, which is a zero touch deployment feature set, whereas upon booting, the 2960-X’s configuration is downloaded from the network without operator intervention. Also included is Cisco’s Auto Smartports, which detects end points connected into the 2960-X that comply with Plug and Play for End Devices and automates their configuration.

Secure: The 2960-X is being equipped with state-of-the-art threat mitigation and secure access technology, making it one of the most secure access switches on the market. The 2960-X will support 802.1X for secure access. In addition, role-based security is enabled with the inclusion of Cisco’s TrustSec. Role-based access can be enhanced and scaled via role-based ACL support. IPv6 first hop security is implemented as well as the integration of Cisco’s Identity Service Engine, which enables one policy to be defined and implemented across wired and wireless networks independent upon end point.

Power Efficiency at a New Level

Out of the suite of new services above, the 2960-X’s energy efficiency is one of the most impressive attributes. Its power consumption is based upon traffic flow plus EnergyWise control. Consider a typical business day. At 8am, when the workday starts, the 2960-X would be at full utilization taking advantage of its high efficiency power supply that offers 3 to 10% power savings when compared to other access switches. At noon, when Ethernet traffic is low, power is saved, thanks to the 2690-X’s Energy Efficient Ethernet feature. At closing time at 5pm, EnergyWise can place IP endpoints in energy saving mode, cutting power by as much as 60% for non-active EnergyWise enabled IP devices. At 6pm, back office tasks may take place where the 2960-X can be placed into downlink hibernation mode, providing 0.5 watt savings per port or 24 watts for a 48-port switch. During off hours and weekend, the 2960-X can be placed into hibernation mode, consuming as low as 6 watts vs. 50-85 watts when active. IT departments now have multiple options for lowering energy costs.

The new Catalyst 2960-X doubles the hardware capabilities of the Catalyst 2960-S while adding application visibility and control, plus layer 3 routing, security, simplified operations, and the benefit of being one of the greenest access switches on the market. The ability for the 2960-X to stack with the 2960-S/SF provides investment protection through backward and forward migration and compatibility. All of this adds up to a major addition to the most popular access switches on the market. If the 2960-X lives up to its promise, then IT executives will have a tool to address their growing requirements to securely support BYOD, 802.11ac in the future and increased bandwidth pressure with a platform that reduces total cost of ownership through simplified operations and energy savings.