The trend towards Datacenter consolidation has resulted in reduction in application software deployed at branch location. However for business continuity and application performance reasons some applications must still be deployed at branch infrastructure network. UCS E-Series blade servers gives users the flexibility of running these applications on blade servers inside Cisco ISR G2 series routers. This reduces the amount of space and power consumption by the traditional server infrastructure and lowers the cost of deploying and managing applications at branch. E-Series servers are ideal solution for retail stores, bank branches, clinics and small hospitals where space is a constraint and IT help is not readily available. E-Series servers are ideal solutions for hosting AD, DNS, DHCP, and file & print services at branch location. They are also an ideal way for customers to introduce virtualization in their branches. 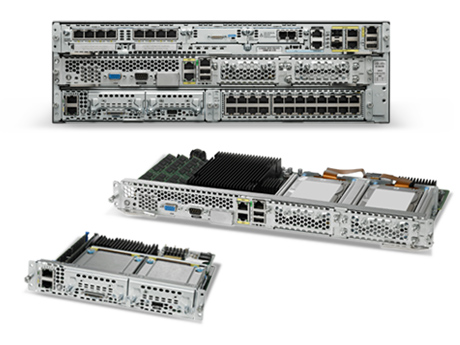 E-Series servers are supported on Cisco 2911, 2921, 2951, 3925, 3925E, 3945, and 3945E ISR routers running Cisco IOS Software Release 15.2(4)M. These servers operate independent of the ISR G2 router and communicate with the router through two internal network interfaces; one L3 connection to router processor and one L2 connection to router multi-gigabit fabric backplane switch. They can also directly connect to the network, without using the router interface, by using the integrated external Gigabit Ethernet ports. In case the router IOS is reloaded the server does not reloads, however any connection through the router interface will not work; although any direct connection via the integrated external Ethernet ports will still work. If the router is hard booted or during a power fluctuation the server will reload.

Following are the hardware specs of E-Series servers:

Power consumption on the units are as follows:

There are two types of VMware hypervisor available to Cisco UCS E-Series customers:

• Custom images, for which Cisco sells the license, but the customer downloads the Cisco and VMware certified version from the VMware website.

d) FCoE is supported on a double-wide blade with a 10 Gigabit Ethernet PCIe card.

a) Cisco UCS E-Series Servers do not include features such as Cisco Unified Fabric, Cisco Extended Memory Technology, Cisco VN-Link, and other hardware and large deployment management features that are relevant to data centers and not necessary for most lean branch-office environments.

b) Cisco UCS E-Series management is not integrated into Cisco UCS Manager today because of the differences in features and deployment scenarios for the Cisco UCS B-Series, C-Series, and E-Series product lines.

10 Tips You Should Know about Cisco UCS