You are here: Home 2014 February Cisco ACL In and Out Questions

But see this is where I get a little confused. Wouldn’t I want the ACL for blocking PC0 from the Internet on IN on the router interface for PC0. This way -the ACL would save processing power? Does it matter if the ACL is Standard or Extended?

If the data is moving from the internet to PC0, it is flowing (in the example picture) from right to left. When it hits the router, it’s flowing IN the right-most port on the router, and back OUT the left port.

Similarly when data is flowing from PC0 out to the internet, it’s flowing from left to right; IN the left-most port of the router and OUT the right-most port.  Regarding where you would want to place an ACL; that depends on if it’s a standard or extended ACL. I don’t know if you’re studied that material yet, but once you do it makes more sense about WHERE you would want to apply it.

Q2: Access List In/Out clarification. I have a clarifying question re: placing an access list into or out of an interface.
Let’s say for the sake of keeping it basic that I have this topology:
PC1—>E0Router1E1<—-PC2

Would the Cisco recommended way be to put it on E1 since it’s the closest to the destination?

This is regarding Standard ACL’s but I’m assuming this will also come up on Extended ones. 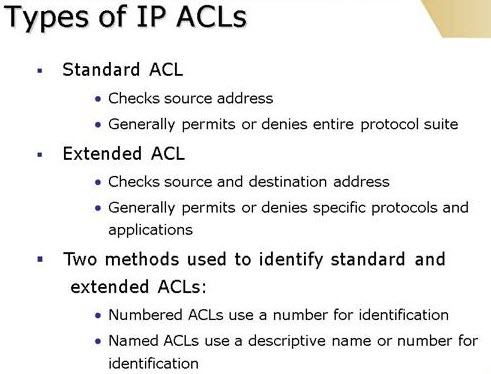 There’s just two different ways of saying the same thing but there is a best practice (placing close to destination in standard and close to source in extended.) I thought there was some secret algorithm you had to run to determine which one it was.

As said above, for _extended_ ACL’s you always want them as close to the source as possible. The reason this is done is to have the traffic dropped *before* the CPU has to spend cycles looking at the packet and making judgments of where to send it. …

So packets from the internal network to the Internet are “in” on e0 and “out” on s0.

Are my assumptions of in/out correct?

Or should they be applied to the same interface?

Since it’s applied to the interface, you must consider it that way, not ‘to the router’ per say…

Anything leaving interface s0 will be covered by 102, anything entering the interface s0 will be covered by 101. Where you put the ACL is really up to you. I’ve seen it done both ways (sorry, had to edit this part, must remember to have a cup of coffee before reading/responding to posts), generally with the consideration of avoiding passing packets through the router only to drop them as they attempt to leave the interface…

Indeed, you usually try to drop traffic as close to the edge as possible.

Standard ACL should be placed close to destination Extended ACL should be placed close to source that should be your guide when you think about placing ACLs, the other is really up to your wishes. Oh, and you shouldn’t watch it from the routers perspective, take the interfaces point of view when you say in it means inbound traffic on that interface out means outbound traffic on that interface so on every interface you can have in and out…