Cisco 2960S series, Cisco 3560X and 3750X switches are so popular and commonly used by Branch, Business and Campus. If an organization decides to set up a better and more secure network, there are some key elements considered such as Power Consumption, Product Performance, efficiency, business Processes and so on. Miercom tested Cisco’s three catalyst switches-Catalyst C2960S-48TS-L, C3560X-48T-S and C3750X-48T-S. What are the main findings and conclusions? Let’s share the main points that Miercom reported.

Additional configuration is provided through CLI and Web browser GUI.

The switches are compatible with Cisco’s EnergyWise software that manages power usage for optimum cost savings. With EnergyWise, devices can be placed into sleep mode when they are not needed so that power consumption is reduced. 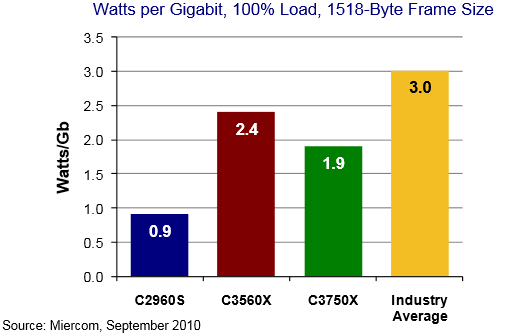 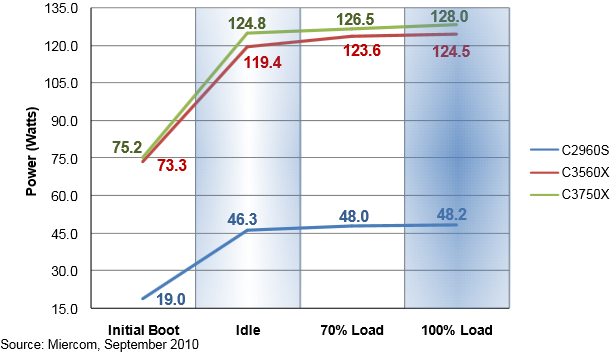 Power profile showing the power consumption in various modes of operation from power up, idle and 70% and 100% link utilization at 1518-byte frames for the switches under test.

When examining energy consumption based on a function of throughput, all the switches under test outperformed the industry average based on Watts per Gigabit.

As technology advances in power efficiency and cooling, these switches can be upgraded rather than replaced. 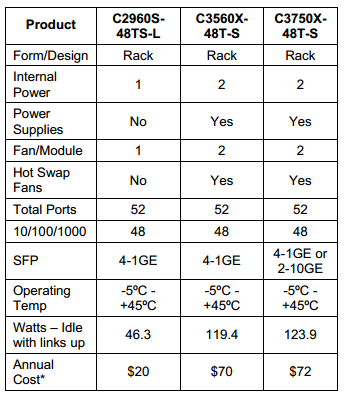 The C3560X and C3750X can be configured to use the StackPower feature that requires between two and nine physical switches to enable power sharing efficiency. StackPower technology reduces the number of power supplies needed per switch, and allows the switches to perform at optimum efficiency.

The three Catalyst switches can be easily managed via a secure Web browser interface with Cisco Network Assistant and CiscoWorks LAN Management System. The Cisco IOS CLI can be used for more thorough configurations via serial console, Telnet or SSH. Configuring interfaces, IP addresses, VLANs and many other features with the Cisco Web GUI makes it extremely easy to configure and takes very little time.

The C3560X and C3750X series switches are capable of using the Cisco StackWise feature that enables multiple switches to act as one. The switches in the stack use special stack interconnect cables that create a continuous connection between the switches. Once the switches in the stack are configured properly, the stack can be managed with a single IP address. Switches can be added or removed to and from the StackWise implementation without affecting performance. The C2960S series switch has a similar feature called FlexStack. FlexStack also combines multiple switches to act as one to gain redundancy and high availability.

Cisco reduces waste output by engineering products that use fewer materials to operate. Cisco products are capable of being upgraded, refurbished and recycled, instead of being disposed of which would increase landfill waste.

Cisco aims to reduce both operational and environmental costs by offering new ways of communication and manageability. They believe that there is a need for working productively across distances without travel, to reduce emissions and keep the environment sustainable.

Cisco has two green programs that they endorse: EnergyWise and SmartGrid. Cisco’s EnergyWise software controls power consumption of network devices to reduce overall cost and provide energy savings. Cisco’s SmartGrid is a combination of products, technologies, services, and ecology-minded partners that optimize communications and reduce the operational cost and intricacy of the energy grid.

The Cisco Catalyst C2960S, C3560X and C3750X switches are able to run in higher temperature ranges so that fans run at lower speeds, lowering energy consumed by the fans. Cisco also has the ability for its switch power supplies to be put offline when they are not in use. Since 2008, Cisco has reduced the amount of paper, plastic and metal materials that ship with their products. They have replaced these materials with more environmentally friendly solutions, such as using 100% recyclable materials and removing nonessential materials like magnets, rubber feet and generic cables.

More Cisco Catalyst Switch Topics you can read at https://blog.router-switch.com/category/reviews/cisco-switches/