You are here: Home 2012 May Access Point Vs. Wireless Bridge

Wireless bridge and access point offer radio link connectivity over a computer network, but they are structurally and functionally designed to serve slightly different purposes. Setting up a vast wireless network for a corporate office space requires the installation of many networking devices that facilitate connectivity over the entire network. Two such devices are ‘Wireless Bridges‘ and ‘Wireless Access Points‘. Since both have overlapping areas of functionality, there seems to be confusion regarding how they differ from each other. 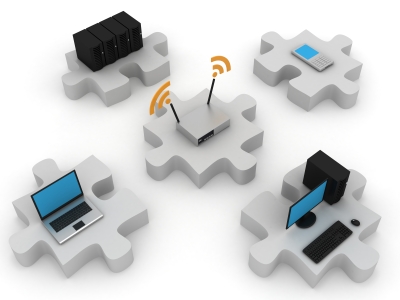 “Does anyone know the differences between bridges and access points? Are they the same thing? And any info of wireless bridges vs. wireless access points.”

“Can anybody tell me what the difference between a wireless Bridge and an Access Point?”

“I am confused in Concepts of Access Point and Wireless Bridges.
What i have figured out is that Wireless bridges relay frames between 802.11 WLAN and 802.3 LAN.
What about AP?”

“I have a Linksys 10/100 wireless router with several computers connected to it, both wired and wirelessly.

I recently purchased a ReplayTV digital video recorder for my living room, which I attach to my router via an ethernet cable every two weeks to download new program listings from the Internet. I would like to replace this cable with a wireless solution by buying a wiress device and plugging my ReplayTV into it, and having this device give me access to the Internet through my router.

My question is: A) Do I need a wireless access point or a wireless bridge, and B) what’s the difference between the two?”

All the questions mentioned above show that many network users may be confused with what are wireless bridge and access points, and the main difference between Wireless Bridge and Access Point.

Well, let’s have an overview on wireless bridge and access point, the main features, the main difference…

Wireless Bridges
A computer network tends to be divided into various segments that need to be integrated together. A network bridge connects such divided network segments together, facilitating data sharing. Before the advent of Wi-Fi technology, network bridges were connected through wired ethernet cables. Specifically, in context of the OSI model, network bridges connect segments on layer 2 (data link layer).

These are intelligent devices compared to hubs and repeaters, that control data flow to and fro, from the connected network segments. A wireless bridge performs the same function of linking network segments, but it does that through a Wi-Fi link, instead of a wired ethernet link. It can connect two networks together with a radio link, to facilitate connectivity and data transfer between them.

Such bridges may also be used to connect an ethernet network, with an access point or wireless router, for Internet connectivity. Using a ‘Wireless Distribution System’, bridges are set up to connect multiple networks. There are more than one types of wireless bridges, ranging from basic ones, which facilitate ethernet connectivity with a wireless access point, to ones that double up as a wireless access point and a bridge. That seems to be the source of confusion between the two devices.

Firstly, look at the simple illustration of wireless bridge and Access Point:

In the *strict* use of the terminology, the following does NOT work

The AP cannot associate with an AP.

With that being said, this is usually a software limitation and a lot of AP’s can actually function as a bridge.

Though wireless bridges and access points were separately manufactured before, today a combination of these two devices is more popularly used. These devices offer both bridging and multiple device wireless connectivity. Therefore, the boundary between the functionality of both devices has become blurred. If you are thinking of buying a wireless access point/bridge device, make sure that you go for a 802.11n wireless networking standard based device, which offers the highest data transmission speed currently.