You are here: Home 2017 April Upgrade Your Cisco Routers 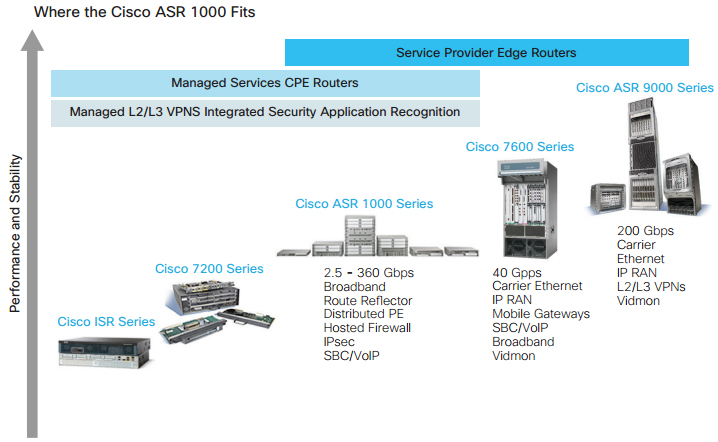 Cisco ASR 1000 Series Routers were developed as a direct replacement for Cisco 7200 Series Routers. Cisco ASR 1000 Series Routes are feature-rich edge routers that address the complex requirements of the modern networks. These routers meet the needs of both service providers and enterprises. They are available in sizes ranging from 1 rack unit (RU) to 13 RU. The feature set is common across the 1 RU to 13 RU size range. The only difference is performance and level of hardware redundancy that may be needed. In most cases, the 2 RU sized Cisco ASR 1002-X will be the appropriate replacement. It offers switchable performance from 2.5 Gbps up to 36 Gbps with no hardware upgrade. Note that the performance is sustained even when multiple built-in features such as secured VPN technology and a zone-based firewall are switched on. Cisco ASR 1000 Series Routers were developed to sustain multiple features beyond traditional routing protocols and packet forwarding.

Which Platform is most Suitable?

Once you have determined that the features you require are supported, in general any router within a series will be suitable. With the Cisco ASR 1000 Series Routers, the differences between the platforms relate to performance and level of redundancy. The larger platforms are capable of higher throughput. A typical choice is the Cisco ASR 1002-X platform which can be purchased to support 2.5 Gbps of performance (with features) but can be turned up to 36 Gbps with no hardware swap-out needed.

For highly resilient WAN aggregation and Internet Edge scenarios the Cisco ASR 1006 platform is more suitable because it can continue to operate with hardware failures within the chassis. The smaller Cisco ASR 1000 series platforms offer software-based resiliency with multiple redundant IOS processes running on the Linux kernel in IOS XE, and hardware based redundancy using protocols such as Hot Standby Router Protocol (HSRP) operating between devices.

For lower throughput scenarios or for scenarios that require in-box WAN acceleration, the Cisco ISR 4451-X is the most suitable platform.

If an unusual feature is needed that is not supported on the Cisco ASR 1000 or Cisco ISR4451-X platforms, then the Cisco ISR G2 3945E should be considered.

Q: What if further assistance is needed?

A: The Cisco 7200 Series Routers have been successfully migrated to more modern Cisco routers in thousands of customer networks over the past two years. So, we are confident that all common Cisco 7200 scenarios have been addressed or enhanced. If it is possible for Cisco to obtain a copy of your router configuration file then it can be submitted to your Account Team. The router configuration file will be checked for any CLI that has been deprecated, and workarounds suggested.

Q: Is there a list of every single feature that is not supported on replacement hardware?

A: There are hundreds of thousands of command line combinations in IOS, of which we believe very few are not supported today. They are the ones which are either removed because the scenarios have become outdated, or ones that are uncommon and not likely to be required by any customer, or are planned for a later release.