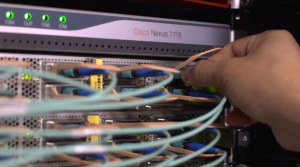 The Nexus 7000 and Nexus 7700 product family is modular in design with great focus on the redundancy of all the critical components; this has been applied across the physical, environmental, power, and system software aspects of the chassis.

NOTE: There are dedicated slots for the supervisor engines in all Nexus chassis; the supervisor modules are not interchangeable between the Nexus 7000 and Nexus 7700 chassis.

NOTE: The fabric modules between the Nexus 7000 and Nexus 7700 are not interchangeable.

NOTE: When you go through Table 1-5, you might wonder how the switching capacity was calculated. For example, the Nexus 7010 has eight line cards slots, so the calculation is

In some bandwidth calculations for the chassis, the supervisor slots are taken into consideration because each supervisor slot has a single channel of connectivity to each fabric card, so that makes a total of five crossbar channels.

So, for example, the Cisco Nexus 7010 bandwidth is being calculated like so:

The Cisco Nexus 7009 switch chassis shown in Figure 1-20 has two supervisor module slots and seven I/O module slots; the complete specification for the Nexus 7009 is shown in Table 1-5. The Nexus 7009 switch has a single fan tray. The fan redundancy is two parts: individual fans in the fan tray and fan tray controllers. The fan controllers are fully redundant, reducing the probability of a total fan tray failure. The fans in the fan trays are individually wired to isolate any failure and are fully redundant so that other fans in the tray can take over when one or more fans fail. So, there is redundancy within the cooling system due to the number of fans. If an individual fan fails, other fans automatically run at higher speeds, and the system will continue to function, giving you time to get a spare and replace the fan tray.

Although the Nexus 7009 has side-to-side airflow, there is a solution for hot aisle–cold aisle design with the 9-slot chassis.

The Cisco Nexus 7010 switch chassis shown in Figure 1-21 has two supervisor engine slots and eight I/O modules slots; the complete specification is shown in Table 1-5. There are multiple fans on the 7010 system fan trays. The fans on the trays are N+1 redundant. Any single fan failure will not result in degradation in service; the box does not overheat, and the fan tray will need replacing to restore N+1. 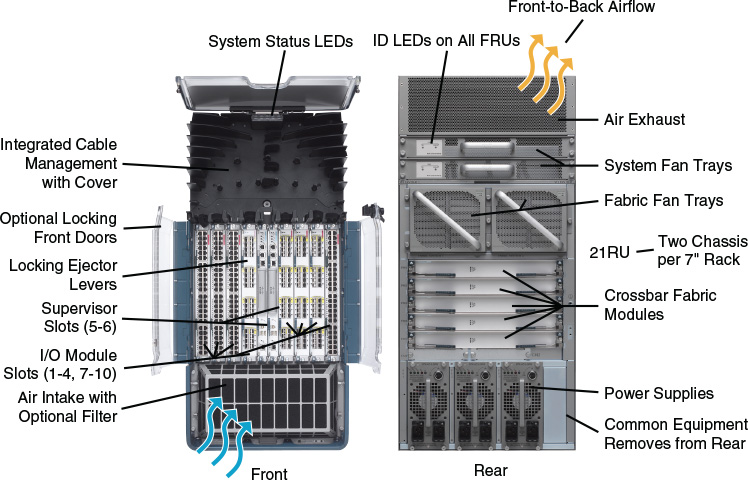 There are two system fan trays in the 7010. If either of the fan trays fails, the system will keep running without overheating as long as the operating environment is within specifications, until the fan tray is replaced. Fan tray replacement restores N+1 redundancy.

There are two fabric fan modules in the 7010; both are required for normal operation. If either fabric fan fails, the remaining fabric fan will continue to cool the fabric modules until the fan is replaced, restoring the N+1 redundancy. The system should not be operated with either the system fan tray or the fabric fan components removed, apart from the hot swap period of up to 3 minutes.

The Cisco Nexus 7018 switch chassis shown in Figure 1-22 has two supervisor engine slots and 16 I/O module slots; the complete specification is shown in Table 1-5. For the 7018 system, there are two system fan trays—one for the upper half and one for the lower half of the system. Both fan trays must be installed at all times (apart from maintenance). Each fan tray contains 12 fans that are in three rows of four. Each row cools three module slots (I/O and supervisor). The failure of a single fan will result in the other fans increasing speed to compensate, and they will continue to cool the system. The fan tray should be replaced to restore the N+1 fan resilience. Integrated into the system fan tray are the fabric fans. The fabric fans are at the rear of the system fan tray. The two fans are in series so that the air passes through both to leave the switch and cool the fabric modules. Failure of a single fabric fan will not result in a failure; the remaining fan will cool the fabric modules. 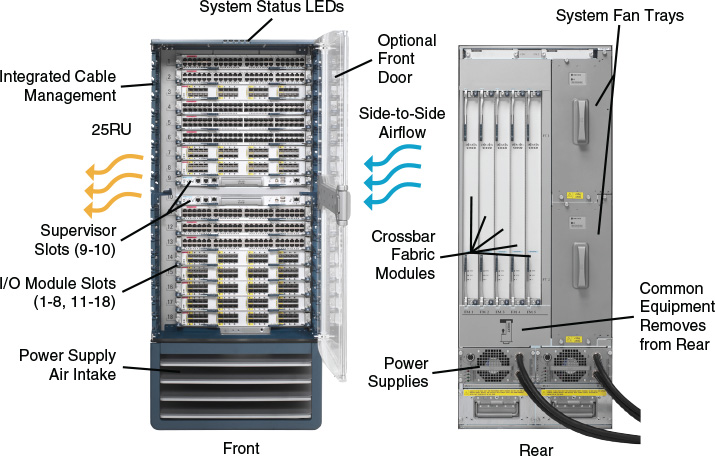 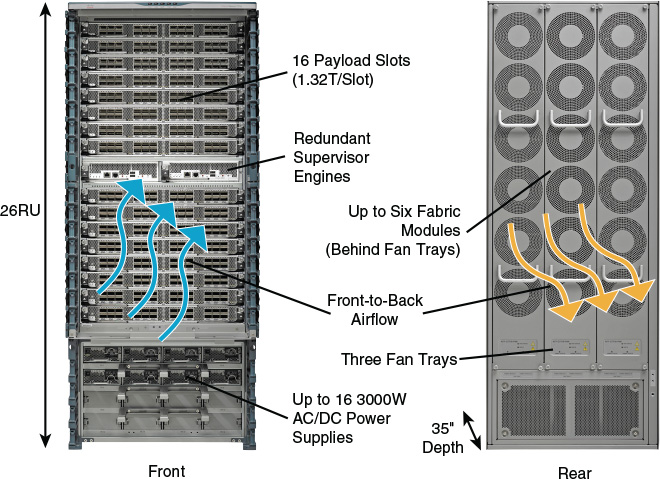 You can compare all available models at the following URL: https://www.cisco.com/c/en/us/products/switches/nexus-7000-series-switches/models-comparison.html