You are here: Home 2020 April Xiaomi WiFi 6 Router AX3600 Evaluation Has Excellent Cost Performance And Can Be Used As An e-Competition Router

In fact, the innovation of current network technology is not limited to 5G, but also some other technologies are being upgraded and improved together, such as the WiFi 6 that has attracted more attention recently.

With the release of Xiaomi 10 series products recently, WiFi 6 has been mentioned again.

This wireless local area network standard can provide faster network connection speed and stability, and will play a role in the future of the further explosion of network terminal equipment scale, and become the first choice for families, offices and public places to build wireless networks.

Watch this introduction video of WiFi 6 at first and learn more deatils in the following post.

Let’s take a look at WiFi 6. WiFi 6 standard was officially released in 2019. It is the latest version of IEEE 802.11 wireless LAN standard. It provides compatibility with previous network standards, including 802.11n/ac, which is now widely used.

IEEE 802.11ax is defined by the Institute of electrical and electronics engineers, and the WiFi alliance responsible for business certification is called WiFi 6 for publicity.

The previous 802.11n/ac was also renamed WiFi 4 and WiFi 5 in this renaming campaign.

The simplified naming can also directly reflect the iteration of technology. For consumers, there is no need to spend more time to understand the differences between different network standards, or to be misled by one-sided marketing vocabulary. Simple numbers can show the advantages and disadvantages of products.

With the same bandwidth, WiFi 6 can achieve near full rate access. However, in real life, the performance of WiFi will be different, which depends on the range of wireless access points and devices, obstacles, other air signals and the quality of radio.

Traditionally, when users use WiFi, the network performance can not be predicted under heavy load, including the delay and throughput will be greatly affected.

WiFi 6 can improve the connection speed to some extent, but its biggest feature is to solve the network congestion and capacity problems when “a large number of devices” connect to the network.

With the characteristics of low delay, high capacity and fast speed, in 2020, the number of devices that can support WiFi 6 standard is increasing.

At the launch of Xiaomi 10 series, Xiaomi also launched a router product AX3600 with high cost-effective WiFi 6 standard, which lowers the price standard of the expensive WiFi 6 routing equipment on the market and enables more users to experience the new network connectivity experience brought by WiFi 6. Next, I will send you the use evaluation of this router. 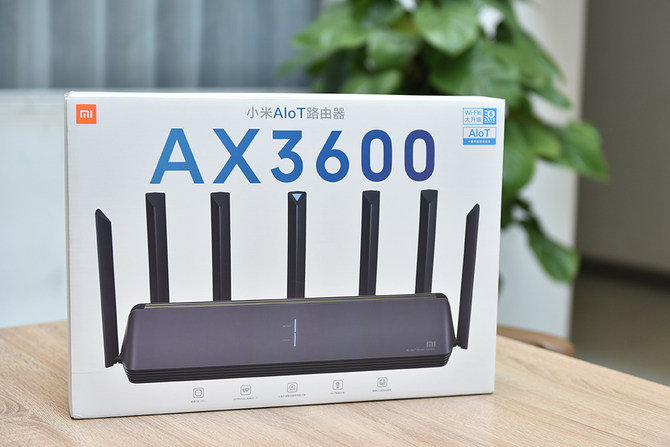 According to the Convention, first of all, the appearance of this product is introduced. Compared with the AC2100 and some ordinary home routers, which have hidden the simple column design or square box design of the antenna, the millet AIOT Router AX3600 is quite different.

On the whole, we can still see the shadow of Xiaomi’s simple style, but I’m afraid that the most prominent one is the design of seven antennas. The antennas around the route can be rotated and adjusted at will, which also ensures the stability of WiFi signal to the greatest extent. 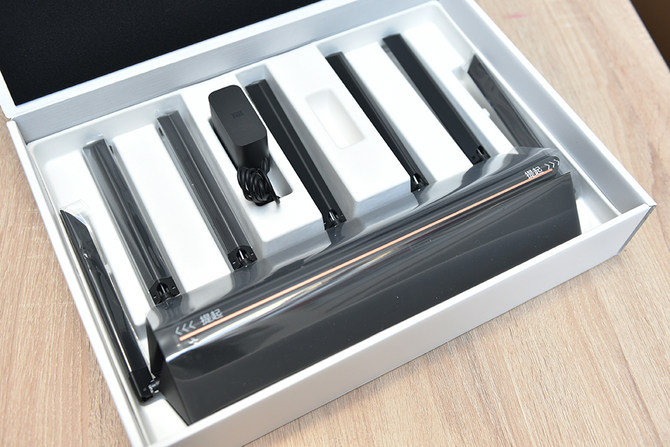 The indicator light on the antenna can mainly understand the alot status. When the network is in normal condition, it is light blue, and when the distribution network or the network has problems, it is orange.

In the Xiaomi WiFi app, you can also turn off the routing light. After turning off, there will be no flickering light to affect the rest at night. 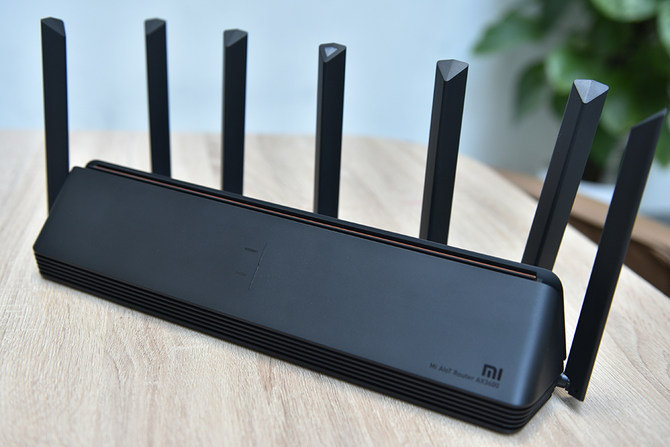 The Xiaomi AIOT Router AX3600 is designed with a long triangular shape, which can be suitable for multiple scenes.

The whole router’s cooling design is relatively perfect, and it can also get good cooling in the use of multiple devices.

One WAN port and three LAN ports are set at the back, which also meet the needs of using network cable to connect equipment.

Overall, the overall volume is indeed larger than that of ordinary home routers. Although the design style is somewhat different from millet, compared with some fancy high-performance routes, this AX3600 is still low-key. 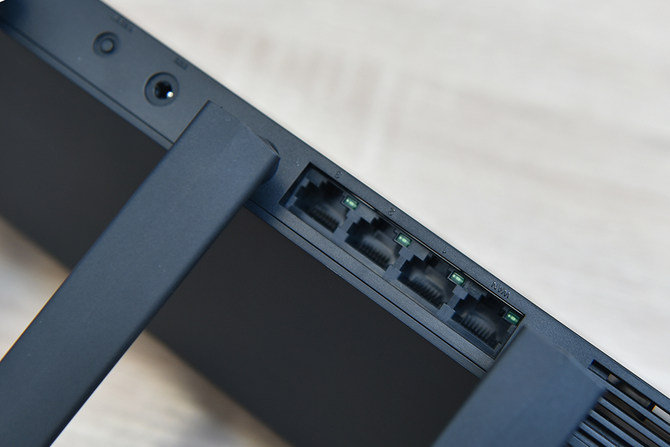 Compared with the previous 802.11b/g/n/ac (WiFi 4 and WiFi 5), WiFi 6 has natural speed and coverage advantages in technology.

If there is a need to make the home router cover the signal better, it is worth replacing with a WiFi 6 network router. 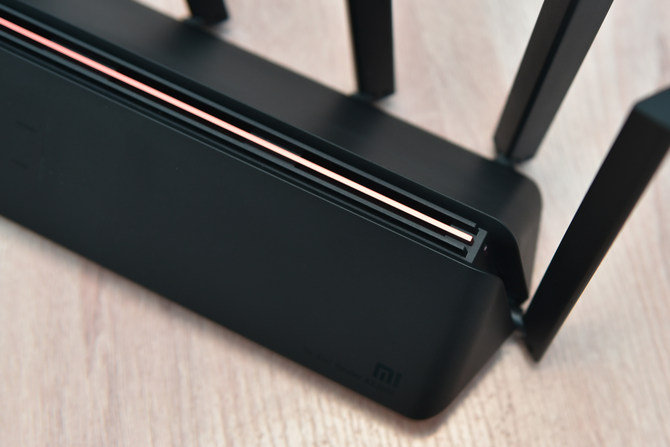 According to the official test data, it is no problem that the Xiaomi AIOT Router AX3600 can cover a typical scene of 100 square meters and three bedrooms. (except for some dead signal corners, such as the corner of the bathroom wall, the balcony protruding from the room with two walls apart, etc., there is no problem for covering most of the room area.)

My home area is about 45 square meters, and the signal has coverage in every corner.

Even the bathroom, which is separated by two walls, can easily search and connect to the 5G signal of the route.

The Xiaomi AIOT Router AX3600 provides 2.4GHz and 5GHz frequency bands, both of which support 11ax technology, and the dual frequency concurrent wireless rate is up to 2976Mbps. The theoretical speed of WiFi 6 AX3600 is 155% higher than that of WiFi 5 AC1200.

The most important thing is that with the increase of smart devices in the home, the devices connected to the wireless network show an increasing trend. In the scenario of multiple devices connected at the same time, WiFi 6 router can significantly reduce the data delay and jam.

When it comes to the networking of intelligent devices, we have to say the features of the Xiaomi AIOT Router AX3600.

This router has an independent AIOT smart antenna. As long as you open the Mijia app in the network environment, you can automatically discover the uninitialized Xiaomi smart devices around you, and you can distribute the network for new devices with one click, eliminating the process of manually adding search devices and manually entering passwords.

If there are multiple types of MI home devices in your home, you will also save a lot of tedious steps when replacing and upgrading WiFi, and quickly configure them.

Of course, if there are many access devices, there will inevitably be access problems of unknown devices, and even lead to network security risks.

Combined with years of technology accumulation of Xiaomi smart home, Xiaomi AIOT Router AX3600 can provide security protection for mainstream smart home devices of various brands on the market, and detect potential vulnerabilities with one click.

With the Xiaomi WiFi app, users will be prompted when new devices are connected.

By setting the security registration of protection in the app, when a strange device is found to be accessed, the access can be blocked or one click blacking can be performed.

Built in game acceleration reduces the delay of host game

For the use scenarios of game players, the Xiaomi AIOT Router AX3600 has built-in Netease UU accelerator plug-in, which supports the global network acceleration function of mainstream console games such as PS4, switch, Xbox one, and reduces the online battle delay.

New users can get free time of three months worth 90 yuan by binding Netease UU accelerator with Xiaomi WiFi app.

UU accelerator is also applicable to mobile phones and PC games. As long as you select the game that needs to be accelerated in response to the setting interface, you can achieve a low latency game experience.

Configuration and other features

In the current router configuration, these chips are very high-end components, which are only used by high-end brand thousand yuan level electric competition router.

At present, the pricing of WiFi 6 router with multi-core processor in the market is basically starting at 1000 yuan (considering that the actual price of e-commerce discount is also more than 800 yuan), and the price of some four core processor models is even more than 2000 yuan.

The Xiaomi AIOT Router AX3600 has a high-performance chipset, flagship antenna configuration, coupled with the natural leadership of WiFi 6 technology, and can even be used as an electric competition router. 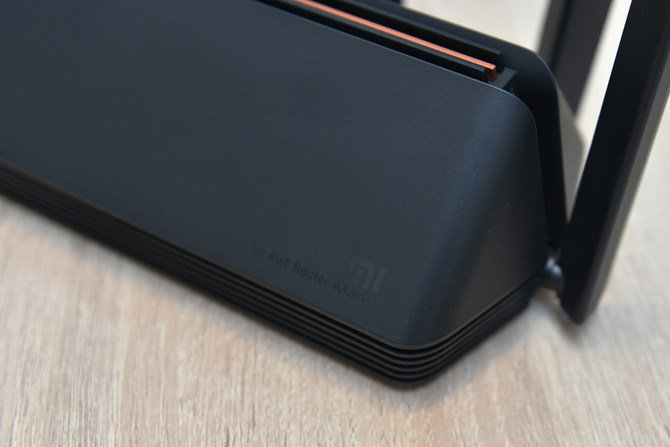 Use 5G network of mobile operator outdoors, and use WiFi 6 provided by router indoors. Complement each other in network coverage and tariff.

By upgrading the WiFi 6 router, a large number of smart home products can be stably and quickly connected to the router, ensuring the stable operation of the device.

The Xiaomi AIOT Router AX3600 uses Qualcomm’s four core SOC, with 512MB of memory and a hand price of only 599 yuan. It can be said that it has an excellent price performance ratio.

What is 5G Routers?