You are here: Home 2020 May New Climber! China’s 5G Signal Ascends to the Summit of Mount Everest

So far, China Mobile’s five 5G base stations at the 6,500-meter elevation campground at Mount Everest, the 5,800-meter elevation campground and 5,300 meters at the Everest base camp have all been put into use for Mount Everest, scientific research, environmental monitoring, high-definition live broadcast, etc. The activities provided communication guarantees, which effectively demonstrated the strength of China’s rapid development of 5G. 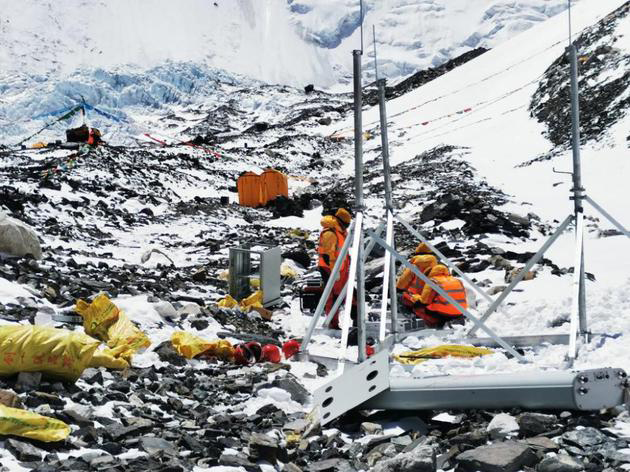 The staff set up a 5G base station in the forward camp at the altitude of 6,500 meters.

It is understood that this action is a special action for “Mount Everest on 5G” and has been officially launched since April this year. The action plan is to build 5 5G base stations in the form of SA + NSA networking at the Everest Base Camp at 5300 meters above sea level, the Transition Camp at 5800 meters and the Forward Camp at 6500 meters. At the same time, it will provide gigabit broadband and dedicated line access.

Specifically, the operation will lay 25 kilometers of optical cables in 5,300 meters, 5,800 meters, and 6,500 meters high and cold areas, transfer 8 tons of network construction equipment and life support materials through shoulder-bearing pig packs, and use Huawei equipment to build and open three 4G base stations and Five 5G base stations and 12 network maintenance and optimization personnel are on duty 7 * 24 hours in an area above 5300 meters above sea level to ensure smooth and good network performance in the Everest area.

In addition, the operation also upgraded, renovated, maintained, and strengthened the 177-km transmission trunk line around the Everest guarantee zone and the node machine rooms along the line, and opened up the Lhasa-Chengdu core network.

According to reports, in addition to meeting the basic communication needs of staff in the base camp, Huawei also launched a 5G + 4K slow live broadcast to the public in conjunction with media such as Migu Video to “Appreciate Mount Everest in the Cloud” anytime and anywhere. At the same time, in view of the high altitude of Everest and the difficulty of on-site operation and maintenance, Huawei HoloSens SDC innovates the “3 free 9 self” capability, supports one-click tuning of video quality, one-click fault positioning, and the device is always online, allowing 6500 meters of Everest live broadcast become possible. 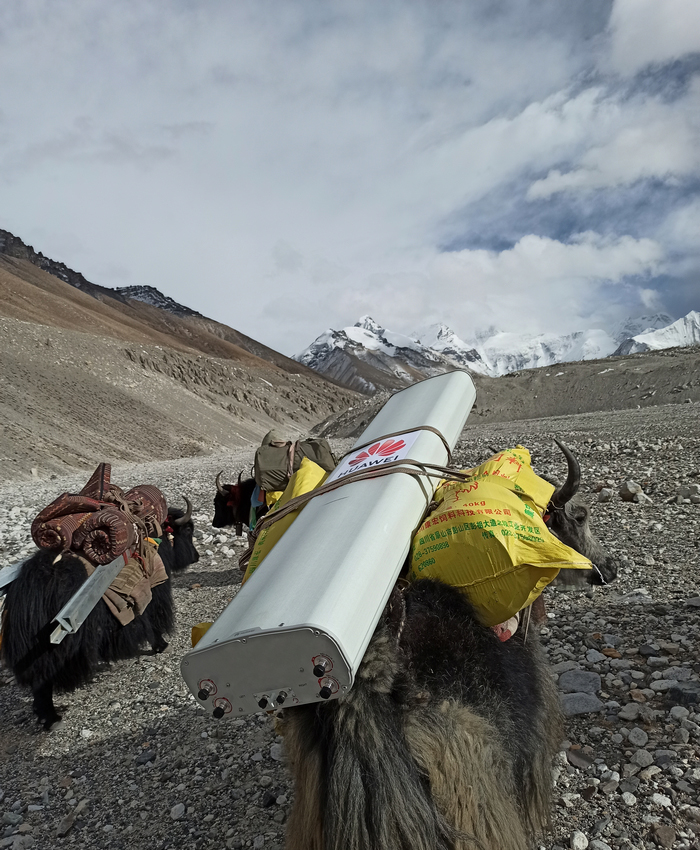 Since vehicles above 5300 meters above sea level on Mount Everest are impassable, Yak shoulders the heavy responsibility of transporting 5G base station equipment.

Success after many ups and downs

The reporter noted that on the 20th, China Mobile had sent a message that it was expected to complete the construction and opening of two 5G base stations and all points of the 6,500-meter advance camp by April 25. Why is the time delayed?

The reporter learned from people familiar with the situation that in the past few days, the snowstorm in the area of Mount Everest 5800 meters and above continued to consider the physical condition and construction safety of the construction workers. Rear. After the 25th, the weather conditions improved and the construction staff sprinted again.

According to reports, in order not to damage the natural ecological environment in the core area of Mount Everest, the construction plan design adopts the method of laying armored optical cables with the least damage to the natural environment to ensure that there is no excavation or damage in the core area; During the construction process, a living area shall be set up in a unified manner, and domestic and construction waste shall be treated in a centralized manner.

In addition, in order to ensure the realization of the goal of laying optical cables to the 6,500-meter forward camp, the construction and construction personnel should be trained in mountaineering in advance, and a responsibility letter should be signed to ensure the smooth and safe implementation of this work. In order to guarantee the operation, China Mobile sent more than 150 employees in charge of construction and maintenance. Huawei coordinated the technology delivery and network assurance team of more than 20 people to the area above 5300m above sea level for 7 * 24 hours to ensure the construction of 5G network in the Everest region. And activation to ensure optimal network performance.

Why build a base station in an area as dangerous as Everest, where few people use the network? Ren Zhengfei, the founder of Huawei, said on May 18, 2019, whether Everest is on the south or north slope, the base station is basically installed by us. There are not many people on Everest. What money can I make? But there may be an Internet that can save the climber’s life. 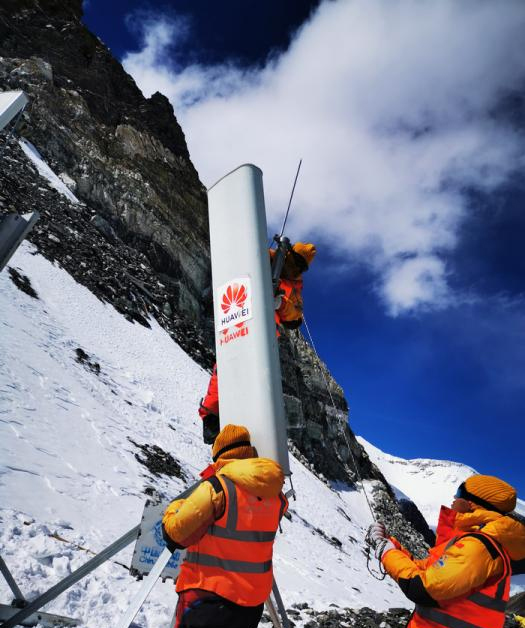 Mount Everest’s 5G base station at an altitude of 6,500 meters.

What kind of equipment can mount Everest?

Netizens who have watched the movie “Climber” must be impressed. The environment of Mount Everest is quite bad, and this time the construction technology of 5G

base stations is more complicated, the construction volume is larger, and the construction environment requirements are higher. It is understood that because the Everest Base Camp and the above areas belong to the National Nature Reserve, it is very difficult to transport materials and enter the site.

In order to solve these difficulties, this construction uses Huawei’s 5G minimalist site and Zhijian all-optical network. It has a high degree of integration, small size, light weight, easy handling and easy installation, which effectively reduces the difficulty of Everest deployment. Moreover, the equipment must be resistant to low temperatures. According to reports, Huawei’s 5G equipment can adapt to the extreme environment of Everest’s low temperature and low pressure, ensuring long-term stable operation.

In addition, the highest site of the 5G base station deployed by China Mobile and Huawei is at an altitude of 6,500 meters, and there is still a drop of more than 2,000 meters from the summit of Mount Everest. To effectively cover the peak, this deployment of 5G base stations uses Huawei 64-channel Massive MIMO ( Large-scale antenna technology) products, through flexible beam forming and high vertical dimension gain, can better match the complicated mountain scene of Mount Everest.

At the same time, combined with Huawei’s Massive MIMO technology and algorithm, the cell capacity and peak user rate have been greatly improved. According to the field test by the staff, the peak value of the downlink exceeded 1.66Gbps, and the uplink rate was up to 215Mbps, which can effectively meet the requirements of 4K + VR HD live broadcast on Mount Everest.

Huawei said that in terms of hardware, related 5G products have continuously improved single-board integration through the use of higher-integrated chip technology, and the product’s low energy consumption is very necessary for Everest sites with difficult energy supply and protection of Everest’s natural environment. 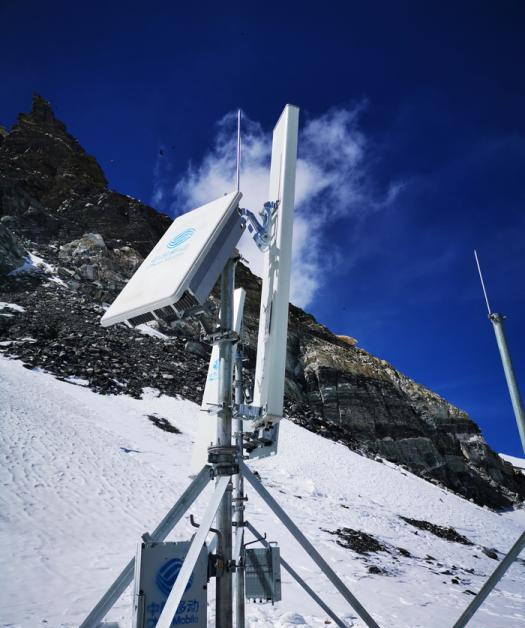 Mount Everest’s 5G base station at an altitude of 6,500 meters.

China Mobile’s communication coverage of Everest can be traced back to 2003.

On May 22, 2003, the Chinese mountaineering team made a call using the China Mobile network at the summit of Mount Everest, and notified the good news by text message.

On August 18, 2005, China Mobile opened a base station at the 5100-meter Rongbu Temple in Mount Everest to provide communication security for Chinese and foreign tourists, mountaineers and scientific expeditions who come to sightseeing.

On May 8, 2008, the Beijing Olympic Flame came to the summit of Mount Everest for the first time. At 9:20:32, China delivered the first Olympic Torch Mount Everest photo to the world, from China through the 2.5G GPRS network of China Mobile. The successful return of the pinnacle has become a feat to refresh the history of mobile communications in the world.

On April 30, 2020, China Mobile and Huawei completed the construction and opening of two 5G base stations and all points at the 6,500-meter forward camp on Mount Everest. The 5G signal covered the summit of Mount Everest.