In the age of digital transformation, AI has the potential to transform every business. From smarter products and services to better business decisions and optimized business processes, AI has the power to change almost everything. If businesses don’t capitalize on this transformative power, they risk being left behind. HPE today has built InfoSight platform to help companies efficiently adopt the Artificial Intelligence and the HPE ProLiant servers are supported by the HPE InfoSight.

What is the HPE InfoSight?

HPE InfoSight is the industry’s advanced Artificial Intelligence for infrastructure. Every second, it collects and analyzes millions of sensors from systems across the globe. HPE InfoSight is a portal that enables you to manage, monitor, and troubleshoot your HPE assets. Some of the benefits of using HPE InfoSight include the ability to monitor the performance of your assets, understand your future needs, troubleshoot issues, request support, and access documentation, KB articles, and release notes.

What are the HPE ProLiant servers with HPE Infosight?

HPE ProLiant is that intelligent compute foundation for hybrid cloud, delivering unmatched workload optimization, security and automation, all available as-a-Service your hybrid cloud infrastructure. The intelligence built into HPE ProLiant simplifies and automates management tasks, establishing a solid foundation for an open, hybrid cloud platform enabled by composability. Building on the operational data of tens of thousands of servers, HPE InfoSight provides continual AI-driven insight and oversight to server operations, predicting and preventing problems before IT operations are impacted.

The table below shows the related HPE servers with HPE Infosight. 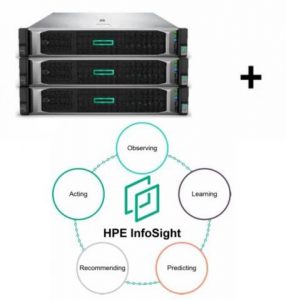 Increases AI adoption and removes the technology knowledge roadblocks to speed delivery of accelerated AI by handling the heavy lifting (expertise, time, and compute resources) with pre-trained NVIDIA GPU Cloud models and workflows with best-in-class accuracy and performance. HPE InfoSight is the secret to taking the guesswork out of your server management.

When you’re making decisions about a new infrastructure, efficiency should be at the top of your list of considerations. HPE’s ProLiant servers with HPE Infosight offer the world’s most energy-efficient tower servers, which deliver higher performance for lower cost and less energy use. In addition to this their rack servers consistently outperform competitors, with as much as 20% better performance!

If you are interested in HPE ProLiant servers with HPE InfoSight, welcome to contact us (sales@router-switch.com) to get more details or check the HPE servers right now.

3 Questions to Consider When Choosing an HPE Gen10 Server