You are here: Home 2022 February Differences Between Layer 2 and Layer 3 Switches｜Which one do you need？

Layer 2 switches are basically just switching, which means they redirect packets from a source port to a destination port using the MAC address of the device. It keeps track of which ports are assigned which MAC addresses by maintaining a MAC address table. MAC addresses operate within layer 2 of the OSI reference model. A MAC address simply distinguishes one device from another, and each device is assigned a unique MAC address. It utilizes hardware-based switching technology to manage traffic in the LAN (Local Area Network). Since the switching happens at layer 2, the process is fairly fast since all it does is order the MAC addresses at the physical layer. Simply put, a Layer 2 switch acts as a bridge between multiple devices.

Difference between Layer 2 and Layer 3 Switch

Switching operates at layer 2 of the OSI reference model, where packets are redirected to destination ports based on MAC addresses. So the layer 2 switch just does the switching. However, Layer 3 switches are specialized hardware devices used to route packets using IP addresses. So it just does routing.

The Layer 2 switch uses the MAC address of the device to redirect packets from the source port to the destination port. They redirect packets by maintaining a table of MAC addresses. Instead, Layer 3 switches use IP addresses to link the individual subnets together through a special routing protocol

Layer 2 switching is hardware based, the switch uses an ASIC (Application Specific Integrated Circuit) to maintain the MAC address table. Switches and bridges use Layer 2 switching like a typical LAN, which divides a large domain into multiple smaller domains. Switches use a process called Address Resolution Protocol (ARP) to determine the MAC addresses of other devices. Layer 3 switches are modern combinations of switches and routers, typically used for routing within virtual LANs (VLANs).

Switches operating at layer 2 typically take less time than switches operating at layer 3. All they do is assign MAC addresses to reroute packets from source ports to destination ports in Layer 2 switching. Conversely, a Layer 2 switch takes some time to inspect the packet before it can find the best route to send the packet to its destination port.

When torn between Layer 2 and Layer 3 switches, you should consider where to use it. If you have a pure Layer 2 domain, you can simply choose a Layer 2 switch. A pure Layer 2 domain is where hosts connect, so Layer 2 switches can function properly there. This is often referred to as the access layer in the network topology. Layer 3 switches are required if you need switches to aggregate multiple access switches and do inter-VLAN routing. This is called the distribution layer in network topology. 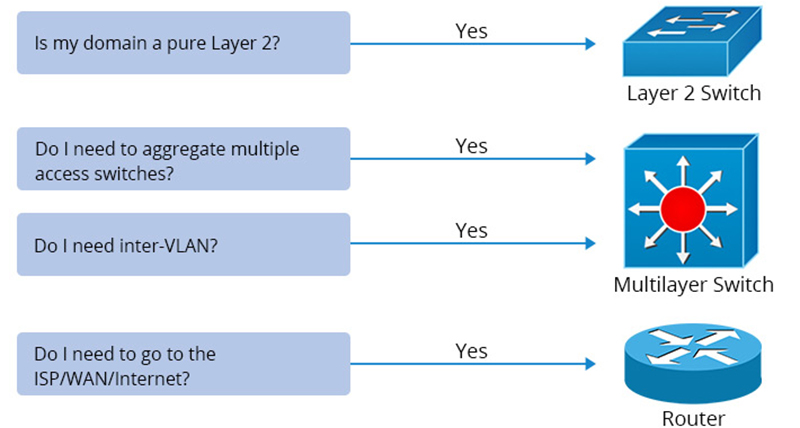 The speed and efficiency of a network switch depends on its processor, switching fabric, and its algorithms. Its complexity depends on the layers at which the switch operates in the Open Systems Interconnection (OSI) model. Generally speaking, ordinary computer networks have always been dominated by Layer 2 switches. But as complexity increases, applications require more robust and reliable network configurations. This is where Layer 3 switches come into play. More advanced equipment is not always better, but it is right to choose the most suitable equipment for your specific application.