Catalyst is the brand name for a variety of network switches sold by Cisco Systems. While commonly associated with Ethernet switches, a number of different interfaces have been available throughout the history of the brand. Cisco acquired several different companies and rebranded their products as different versions of the Catalyst product line. The original Catalyst 5000 and 6000 series were based on products originally developed by Crescendo Communications. The 1700, 1900, and 2800 -series Catalysts came from Grand Junction Networks, and the Catalyst 3000 came from Kalpana in 1994.

In most cases, the technology for the Catalyst Switch was developed separately from Cisco’s router technology. The Catalyst switches originally ran software called CatOS rather than the more widely known Cisco IOS software used by routers. However, this has changed as the product lines have merged closer together. In some cases, particularly in the modular chassis switches, a configuration called ‘Hybrid’ has emerged – this is where the layer 2 functions are configured using CatOS, and the layer 3 elements are configured using IOS. ‘Native IOS’ can also be found with newer software versions that have eliminated CatOS entirely in favor of IOS, even on hardware that originally required CatOS.

The latest version of IOS for the Catalyst 6500 series is 12.2(33)SXI which enables In-Service Software Upgrade (ISSU) via IOS Software Modularity.

Some newer Catalyst switch models (with recent versions of the Cisco IOS) also allow configuration via web-based graphical interface module which is hosted on a HTTP server located on the switch. The IOS config-mode command ‘ip http-server’ will enable this style of configuration. In series 12.x IOS, ‘ip http-server’ is always on as a factory default. The Catalyst 3750-series of switches is an example of a Cisco Catalyst switch that allows this style of GUI configuration via HTTP.

Some newer models of Catalyst switches (called Catalyst Express) no longer allow access to IOS or CatOS at all – these switches can only be configured by using a Graphical User Interface (GUI).

CatOS (Catalyst Operating System) is the discontinued operating system for many of the Catalyst brand of legacy network switches. It was originally called “XDI” by the switching company Crescendo Communications, Inc. Cisco renamed it to CatOS when they acquired Crescendo in late 1993.

As Catalyst devices are primarily Ethernet switches, all modern Catalyst models have Ethernet interfaces, ranging from 10 Mbit/s to 10 Gbit/s depending on the model. Some models can accommodate Asynchronous Transfer Mode interfaces which can be used to bridge Ethernet traffic across wide area networks. Other models can support T1, E1, and ISDN PRI interfaces to provide connections to the PSTN. Legacy models supported a variety of interfaces, such as token ring, FDDI, and 100BaseVG, but are no longer sold by Cisco Systems.

Most models have basic layer 2 functions and are capable of switching Ethernet frames between ports. Commonly found additional features are VLANs, trunking (Cisco proprietary ISL or IEEE 802.1Q) and QoS or CoS. The switches, whether IOS or CatOS, are fully manageable.

Many Catalysts that run IOS are also capable of functioning as a router, making them layer 3 devices; when coupled with TCP and UDP filtering, these switches are capable of layer 2-4 operation. Depending on the exact software image, a Catalyst that runs IOS may be able to tackle large-scale enterprise routing tasks, using router technologies like OSPF or BGP.

Most chassis-based Catalyst models have the concept of field-replaceable “supervisor” cards. These work by separating the line cards, chassis, and processing engine (mirroring most Cisco router designs). The chassis provides power and a high-speed backplane, the line cards provide interfaces to the network, and the processing engine moves packets, participates in routing protocols, etc. This gives several advantages:

Additionally, most high-end switches off-load processing away from the supervisors, allowing line cards to switch traffic directly between ports on the same card without using any processing power or even touching the backplane. Naturally, this can’t be done for all traffic, but basic layer-2 switching can usually be handled exclusively by the line card, and in many cases also more complex operations can be handled as well.

Cisco switches are very popular for a number of reasons, including advanced customization and manageability. The switches can be configured using a serial console or a telnet session (or ssh if the correct OS is loaded along with the ssh keys generated). SNMP allows monitoring of many states, and measurement of traffic flows. Many devices can also run an HTTP server, but this is often disabled because of the security problems it creates – either because it’s not encrypted, or because of the relatively frequent security vulnerabilities in the Cisco http daemon itself. Some Cisco switches focused on smaller organizations forego a command line interface and offer ONLY a web/html interface for configuration and management.

Configuration of the switch is done in plain text and is thus easy to audit – no special tools are required to generate a useful configuration. For sites with more than a few devices it is useful to set up a TFTP server for storing the configuration files and any IOS images for updating. Complex configurations are best created using a text editor (using a site standard template), putting the file on the TFTP server and copying it to the Cisco device. However, it can be noted that a TFTP server can present security problems.

Cisco StackWise is a technology offered by Cisco Systems that allows for up to nine Catalyst switch—3750 series switches to operate as though they were one 32-Gbit/s switch. This allows for greater resiliency, and performance.

One switch from the stack will act as the master switch. The master switch will maintain the stack and allow you to configure and monitor the whole stack as though one via a single console.

If one switch fails the remaining switches will continue to operate by looping back any information that would normally traverse the failed switch, effectively bypassing it. If the master switch fails, the next switch in the stack will automatically take over as master. This feature means greater redundancy, as one switch’s failure will not bring about a failure of the entire stack.

As each switch contains the entire configuration for the stack one of the benefits of this technology is the ability to replace a down switch (any including master) with a new un-programmed switch. The stack will configure the new switch on the fly and allow for minimal downtime

StackWise effectively replaced the GigaStack found on lower-price models such as Catalyst 3560 and 2960 series.

Recently, there is a new variation of the technology, known as Cisco Stackwise Plus, offering 64Gbit/s nonblocking switching fabric speed.

The master switch of a stack is determined in the following order. 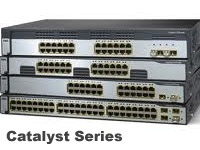 Like most Cisco product lines, the Catalyst Switch series evolves fairly rapidly. There are two general types of Catalyst switches: fixed configuration models/ fixed-configuration switch that are usually one or two rack units in size, with 12 to 80 ports; and modular switches/ chassis-based switch in which virtually every component, from the CPU card to power supplies to switch cards, are individually installed in a chassis.

In general, switch names start with WS-C, followed by the model line (2960). A letter at the end of this number signifies a special feature, followed by the number of ports (usually 24 or 48) and additional nomenclature indicating other features.

Cisco modular switches are much larger and are entirely configurable, beginning with a chassis, power supplies, the choice of supervisory engines (CPU mainboards), and switch modules. Among Cisco’s modular series are:

To sum up, the Cisco Catalyst range is designed to meet the needs of a wide range of customers—from small to medium businesses, right up to large enterprise networks and service providers. Cisco Catalyst switches provide high performance, scalability, manageability, and many other intelligent features that ensure their success to date.