You are here: Home 2011 December Twelve Global Executives to Watch in 2012

Reputations, money, survival. A lot hangs in the balance in 2012 for the prominent heads of many global companies. Here’s a rundown of a dozen of the more intriguing business scenarios and the executives who will need to navigate through them in the coming year. 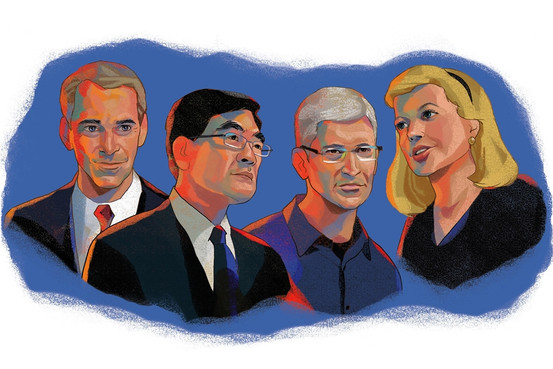 In his 10-plus years with Apple Inc., Tim Cook has proved he’s a whiz at running the technology giant’s operations. In 2012, the world will learn how comfortable he is being the frontman too.

In August, the 51-year-old was appointed CEO, replacing Apple’s co-founder Steve Jobs, who died in October after suffering from pancreatic cancer. So far, Mr. Cook has received high marks from employees and investors who say he’s affable but demanding and who add that he has dug into Apple’s operations and products with a similar attention to detail as did Mr. Jobs.

Next year will bring another set of tests: Mr. Cook will likely take the stage as Apple trots out new versions of old devices, like the iPhone and iPad, and possibly some brand-new products, like a much-anticipated Apple television.

For Akio Toyoda, the president of Toyota Motor Corp., 2012 may be a make or break year.

The head of Japan’s largest auto maker has pledged to keep domestic production at 3 million vehicles a year, even as his Japanese rivals race to offshore. The yen’s surge to record highs against the dollar has eroded profit margins on exports from Japan.

Mr. Toyoda, 55, entering his third year since taking over the quasi-eponymous company founded by his grandfather, has vowed to prevent the hollowing out of Japan’s industrial base. But with Toyota’s stock at 15-year lows, his commitment raises a question echoing a former General Motors Corp. CEO: Is what’s good for Japan good for Toyota and vice versa?

He vowed to protect his company’s labs from the deep cutbacks that rivals like Pfizer Inc. were embracing, and in the process the general counsel-turned-CEO became the leading advocate for the pharmaceutical industry’s science.

Whether Mr. Frazier can win over those who say R&D is wasteful depends on the fortunes of drugs like Bridion, a treatment designed to reverse the effects of surgical anesthesia that Merck expects to submit for U.S. regulatory approval in 2012.

Named chairman and chief executive of the carrier’s parent company, AMR Corp., on Nov. 29—the day AMR filed for Chapter 11—the 50-year-old Texan is now trying to figure out how to make a company that lost $10 billion over the past decade profitable again.

In 2012, his 23rd year with AMR, he will aim to cut costs on aircraft leases and labor contracts, while convincing 88,000 employees his decisions are in their best interest. He may also lead a merger with another airline, or see a competitor mount a hostile takeover.

Does he have the business chops or is he just there because of his father? That’s the question hanging over Cyrus Mistry, the 43-year-old heir apparent at India’s flagship conglomerate, Tata Group, which counts among its holdings Jaguar cars and New York’s Pierre Hotel.

Mr. Mistry’s curriculum vitae touts his achievements as managing director of his family’s construction firm, Shapoorji Pallonji & Co. But his father, reclusive billionaire Pallonji Mistry, also is the biggest shareholder in Tata Sons, Tata’s holding company, with a stake of about 18%.

Mr. Mistry will have time to learn on the job before the answer becomes clear: He will spend almost a year’s apprenticeship with the outgoing chairman, Ratan Tata, who retires in December 2012.

The former head of Apple’s retail stores took the helm of J.C. Penney Co. in November, and already is shaking up the sleepy department store chain.

Ron Johnson, who is largely credited with the “cool factor” in Apple’s stores, brought in a management team of former Apple and Target Corp. colleagues, and struck an exclusive deal with homemaking maven Martha Stewart Living OmnimediaInc.

During the company’s third-quarter conference call in November, Mr. Johnson said, “I am here to transform.”

Now all eyes are on what Mr. Johnson and his new team will tackle first, and how they will adapt to a store with much broader product inventory and a dusty image. Some expect Mr. Johnson to bring on other high-profile exclusive brands.

For Walt Disney Co.’s top executives, 2012 marks the first full year of competition for the CEO crown, and no two candidates are said to be more primed to face off for the job than Tom Staggs and Jay Rasulo.

Serving current Disney Chief Executive Robert Iger, who announced in 2011 his intention to step down from that position in 2015, the two longtime Disney employees two years ago swapped jobs at Mr. Iger’s behest. In the coming year, each is expected to oversee ambitious plans that will telegraph their potential to lead one of the world’s biggest media companies.

Mr. Staggs, chairman of the theme parks and resorts business, will shepherd development of Shanghai Disneyland, part of a $4.4 billion Disney resort that broke ground in April.

Mr. Rasulo, Disney’s chief financial officer, must position the company to measure up to the results of its most recent fiscal year, for which it posted record profit and revenue, as the company pushes into not just China but also media markets in India and Russia.

The top executives of China’s major state-owned companies often seem faceless and interchangeable, in part because authorities frequently shuffle them among different firms.

Nevertheless, Sinopec Chairman Fu Chengyu stands out for his aggressive attitude toward deals and his global ambitions.

Mr. Fu, 60 years old, is best known for running Cnooc Ltd. when it made its audacious, and unsuccessful, 2005 bid to acquire California-based Unocal. Now in a similar position at China Petroleum & Chemical Corp., or Sinopec, Mr. Fu has led a series of acquisition attempts around the globe this year.

Whether he can significantly broaden the company beyond China—and whether he can pull off an unusual unsolicited bid for China Gas Holdings Ltd.—remains to be seen.

On Jan. 1, International Business Machines Corp. will embark on a new era with its first woman at the helm. Virginia M. Rometty, now in her 30th year at IBM, got the nod after shepherding the company’s expansion into high-level consulting and emerging markets.

Chief on her priority list is to continue to drive IBM’s growth initiatives around enterprise software and cloud computing and to achieve greater focus on emerging markets.

At the same time, Ms. Rometty, 54, will have to navigate a turbulent global economy and major shifts in the way companies use technology.

She doesn’t plan any near-term changes to IBM’s strategy, business model or financial road map, she said in an October interview when she was named CEO.

Still, Ms. Rometty knows it is critical that IBM never stop reinventing itself, some advice given to her by outgoing CEO Samuel J. Palmisano, who will remain chairman.

Abilio Diniz spent a lifetime building up Brazil’s largest supermarket chain, Pão de Açúcar, battling his competitors, his family and his friends every step of the way.

At a moment of financial weakness in the last decade, he agreed to sell his empire to France’s Casino SA, but that complex transaction culminates in 2012, when Mr. Diniz, 74, must hand over a single crucial share to give Casino control.

In 2011, the audacious executive sought to keep his company, going behind Casino’s back to cut a deal with the French firm’s fiercest rival, Carrefour SA. The bid failed, but no one believes that has dissuaded Mr. Diniz, and plenty more fireworks are expected before the deadline next June.

Ms. Whitman was named CEO of the struggling computer and printer giant in September and so far has aimed to undo the damage created by her predecessor, Leo Apotheker, including putting the kibosh on a proposed split-off of the company’s PC business.

Ms. Whitman has made it clear she plans to generate steady profits as opposed to making big strategic bets that take H-P into far-flung areas. To that end, she’s already lowered the bar, setting conservative profit targets and declining to provide full-year revenue guidance.

Jack Ma, chairman of China’s largest e-commerce empire, Alibaba Group Holding Ltd., has become a key figure in the uncertain fate of Yahoo Inc., which owns a roughly 40% stake in his company.

Mr. Ma holds the right of first offer to take over Yahoo’s shares in Alibaba, and the executive has made no secret of his intention to get at least some of that stake back. That gives him significant say over the U.S. company’s single most valuable asset.

At home in China, Mr. Ma is trying to stay ahead of the game as competition rises for the first time against his massive online shopping sites, Taobao Marketplace and Taobao Mall, which rival eBay.com in terms of transaction value.

This year, he circumvented his board, including his two biggest investors, Yahoo and Japan’s Softbank, in a decision to transfer ownership of a key subsidiary to a separate company he controlled. Mr. Ma said he made the move to comply with regulations on online payment services but the decision brought him into the debate over Chinese corporate governance issues and heightened concerns that the government may try to further limit foreign investment in the nation’s high-flying Internet sector.

All right, only listing 12 CEO to watch 2012 is not enough according to every company’s reputation, foreground, and fortune. It’s no doubt that these 12 enterprises are super models in their fields, and what about others? Such as Cisco, Google, Facebook, Wal-Mart, Microsoft, etc. what the top 10 or 20 best CEO or companies in your mind, maybe everyone has the different answer. No matter who or which company will be listed in the top place, the most important is its decision-making and its development will influence its industry and the world…