You are here: Home 2012 June How Router Interfaces get Their Names on Cisco Routers?

Why is your router’s Ethernet interface called Ethernet0/0 on one router but Ethernet 3/0 on another router? Where do these names come from? This tutorial will explain how Cisco router interfaces get their names.

Where do Router Interfaces get Their Names?

Cisco router interfaces are named with the following convention:

Now let’s talk about the “slot#/port#” designation. On the old 2500 series routers, they had fixed ports so there was no slot numbers. Thus, if a 2500 series router had two Ethernet interfaces, they were called Ethernet0 and Ethernet1.  It is important to point out that Cisco slots and ports always start with zero first, then one.

On the newer model routers with slots, any interface built onto the router (a fixed port) is considered to be in slot 0 (zero).  This is even true for WAN interface cards (WIC) slots that are on the router.  Any WIC installed in a router is in slot 0.  So, the first WIC installed in the router will always be WIC 0, even if it is in slot 1. This can be confusing sometimes.  So if Slot 0 has a 2 port serial WIC and Slot 1 had a BRI interface, you have Serial 0/0, Serial 0/1, and BRI0/0.

Say that you had a Cisco 3640 router. That router has 4 NM slots and no built in network interfaces. The network module numbering on a 3640 starts with zero and goes to three. This number starts on the bottom right of the router (there are four slots, two and two, each two on top of the other two) with zero. So, the bottom right slot is slot zero. The bottom left slot is one, the top right slot is two, and the top left slot is three. If you put a module with two WIC cards in the top right slot, your WIC cards would be called Ethernet2/0 and Serial2/0.

Here is a picture showing this layout:

The show ip interface brief command is the most useful command to see what interfaces are on the router and what their names are. Here is an example: 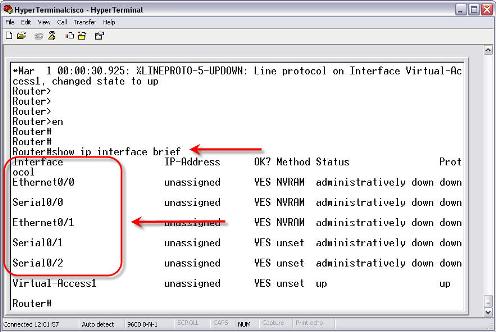 This command output is from a Cisco 2611 router. It has two built in Ethernet interfaces and two WIC slots. In the first WIC slot is a single port Serial module. In the second WIC slot is a two port serial module. You can see how the naming we have been talking about applies to these modules.

Quick overview what you got from the article above:

How to Create an Inter-only VLAN on a Router?

How to Set Up Cisco Router Passwords?