You are here: Home 2012 May Taking on Cisco, Alcatel-Lucent to Enter Internet Core Router Market

Alcatel-Lucent, the Paris-based maker of telecommunications gear, has designed a router to be used at the center of Internet providers’ networks, a market dominated by Cisco Systems Inc. (CSCO) and Juniper Networks Inc. (JNPR)

Alcatel-Lucent is scheduled to introduce today its 7950 XRS router, a device to speed packets of data along networks. The so-called core router, which operates at large-network junction points, took three years to develop and is designed to support as much as 6.4 terabits — or 6.4 trillion bits — per second of data traffic. 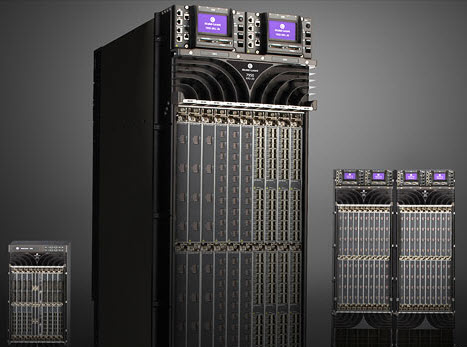 The 7950 XRS represents more than three years of development, and is built on Alcatel-Lucent’s FP3 processor, a 400G-bps chip that initially was used to bring 100 Gigabit Ethernet capabilities to the company’s edge routers. According to the company, the FP3 is aimed at high-performance public and private networks, with a single FP3 processor being able to handle 70,000 simultaneous high-definition video streams or 8.4 million simultaneous retail cloud sessions.

The 7950 line includes three configurations. At the low end is the XRS-16c, which features 6.4Tbps of capacity, 16 interface slots, 32 100G Ethernet ports, 80 40G Ethernet ports, or 320 10G Ethernet ports in a single rack. This standalone system with be available in the first half of 2013.

In the mid-range is the XRS-20, which features 16Tbps of capacity, 20 interface slots, 80 100G, 200 40G, and 800 10G Ethernet ports in a single-rack. It can be configured as the XRS-40 by linking two chassis together, or it can be grouped in a mulltichassis configuration. It will ship in the third quarter and is in trials now.

Alcatel-Lucent says the 7950 represents a fivefold density increase over competing core routers, and a 66% reduction in power consumption. It says a single 7950 node is the equivalent of 10 or 12 competitors’ routers linked together in a multichassis configuration.

Alcatel-Lucent, however, did not disclose a timeframe for shipping its own multichassis interconnect. And separately, but nonetheless coincidentally, Juniper this week announced an increase in capacity on its own TXP multichassis system, from 6.4Tbps to 16Tbps. The TXP can link four Juniper T4000 or eight T1600 core routers into a high-capacity routing system, and Juniper plans to scale the TXP to 64Tbps at an undisclosed date.

The 16Tbps TXP will be available in the fourth quarter.

NOTE: Why re-emerge after 10 years of the industry solidifying around Cisco and Juniper, and why now?

Microsoft Hyper-V: What It Means for Cisco Nexus 1000v