The battle between Cisco and Arista Networks is ultimately a battle between two approaches: one highly programmable operating system that Arista has and the custom silicon route that Cisco normally chooses, said analyst Zeus Kerravala. “All said and done, Cisco tends to win a lot of these battles because they can do some unique things with their custom silicon.”

Cisco Systems and Arista Networks are rolling out new low-latency networking switches that are aimed at such industries as high-frequency financial trading, where a premium is put on moving data between servers as fast as possible.

Some are comparing it with switches from nimble new competitor Arista Networks, as well as the more well-established Juniper Networks. Arista launched in 2008 and, perhaps not coincidentally, is also in the process of announcing a new series of network switches today, the 7150 Series, using its “software defined networking” approach.

Cisco says the 3548 boasts network-access performance as low as 190 nanoseconds. That’s an important advance for high-performance trading markets, where getting and acting on real-time equities, options and other financial market information nanoseconds faster than competitors may be worth millions of dollars.

“Our members expect to connect using high performing and reliable infrastructure for real-time trading and market data,” said Nigel Harold, head of business development technology at the London Stock Exchange. “The new Algo Boost ASIC technology that will be available in the Cisco Nexus 3548 switch offers ultra-low latency and unique features that can increase our visibility across the network and further boost reliability for our customers.”

A Precision Time Protocol, for example, helps trading firms keep their entire infrastructure synchronized, while Active Buffer Monitoring proactively monitors and alerts users to congestion points that could be occurring and may affect application performance.

David Yen, senior vice president of Data Center Group at Cisco, said Cisco has leapfrogged the competition with its new switch. And Zeus Kerravala, principal analyst at ZK Research, agreed. When Arista came out of nowhere, Kerravala said, it took Cisco by surprise and the networking giant fell behind in the market. The Nexus 3548 helps put Cisco back on top, in a market it ruled for many years.

“This product is built with Cisco’s custom silicon. With custom silicon, Cisco can get the numbers down to the absolute lowest possible for today’s technology. That’s what you see here,” Kerravala told us.

“I wouldn’t say Arista is going to go under from this by any stretch of the imagination. When you look at the demographics of the base that’s interested in ultra-low latency, it tends to be Wall Street firms and others that tend to buy from multiple vendors anyway. So there is room for both.”

As Kerravala sees it, Arista’s competitive differentiation is on the software side. Arista is competing on interoperability and broad ecosystem, and its operating system was designed for software-defined networking. Arista has a strong base and is working to expand into other verticals.

The battle between Cisco and Arista is ultimately a battle between two different approaches: one highly programmable operating system that Arista has and the custom silicon route that Cisco normally chooses.

“All said and done, Cisco tends to win a lot of these battles because they can do some unique things with their custom silicon. They can do it because of their size,” Kerravala said. “You can’t really throw that kind of R&D at a problem unless you have the revenues to do so, and sometimes it’s hard to get the revenue to do it unless you throw R&D at the problem.”

The Nexus 3548 one-rack -unit (1RU) 10 GB Ethernet switch running in “warp mode” offers latencies as low as 190 ns in those environments with small to medium Layer 2 and Layer 3 scaling requirements.

The ultra-low-latency switch also facilitates the efficient delivery of stock market data to financial trading servers in as little as 50 ns with the warp switch port analyzer (SPAN) feature.

The Nexus 3548 also includes Hitless Network Address Translation (NAT), a critical feature to allow algorithmic traders to easily connect to any trading venue they desire without any latency penalty. 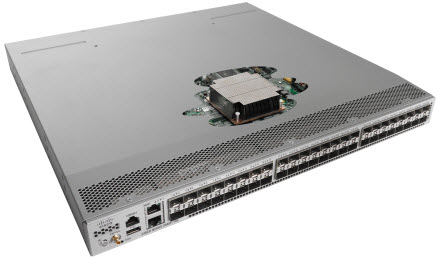 Algo Boost technology allows the Cisco Nexus 3548 to achieve exceptionally low latencies of 250 nanoseconds (ns) or less for all workloads — unicast and multicast, and Layer 2 and 3 — regardless of the features applied.

As part of the Unified Fabric family of switches, the Cisco Nexus 3548 is powered by the data-center-class Cisco NX-OS operating system. Features include:

Specifications at a Glance

“London Stock Exchange is at the heart of the global financial market and home to some of the largest, most successful and dynamic companies in the world. Our members expect to connect using high performing and reliable infrastructure for real-time trading and market data. The new Algo Boost ASIC technology, that will be available in Cisco Nexus 3548 switch, offers ultra-low latency and unique features that can increase our visibility across the network and further boost reliability for our customers.”

“We trade in markets around the globe in an increasingly competitive environment, and investing in state-of-the art technology is one of the keys to producing attractive returns for our investors.  Detecting and handling short-lived congestion in information flows is business critical, since the latency of packets that experience congestion in the network would be significantly higher than the nominal latency of modern Ethernet switches.  Detecting these microbursts of traffic and measuring short-lived congestion in hardware should be very valuable to our investment businesses.”

“Today, Cisco has leapfrogged our competitors in delivering a full featured switch that offers the lowest latency Ethernet in the networking industry. The Nexus 3548 with the unique Cisco Algo Boost technology implemented in ASIC provides a robust feature set to give financial traders more control over their sophisticated trading algorithms and respond more quickly to the changes in the market. In addition to the performance, this unique ultra-low-latency Ethernet technology is part of the unified data center fabric and offers strong total cost of ownership for commercial high-performance computing and big data environments as well as scale-out storage topologies.”